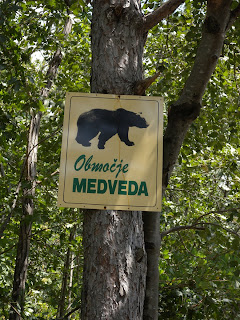 Too hot on the coast for my likings, so today I went to take some "refreshment" on the hills and mountainsides in nearby Slovenia.
First of all, early in the morning, a stop on the grassland of Dane (near Sežana) was a must. To my great astonishment the path through the meadows was covered in Hoopoes! When I arrived something like 15 Hoopoes took off from the ground, only to settle down a few meters further. They fed frenetically and after a while flew off again and landed in a loose flock on some nearby pines. I managed to count at least 15 birds, but I'm sure there were more around. For me it was quite unusual to see this kind of large gathering (probably a group on migration).
In the nearby woodland a Lesser Spotted Woodpecker was calling and there were several Red-backed Shrikes and Mistle Thrushes around as well.
One of the Hoopoes that showed well on a tree - always a great bird to see: 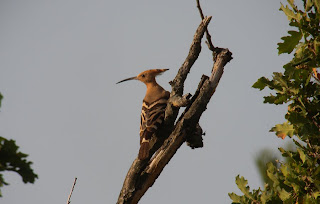 Hoopoes on the ground: 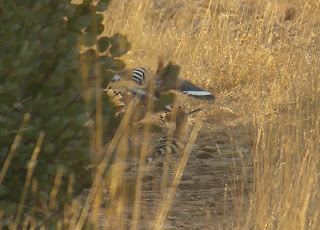 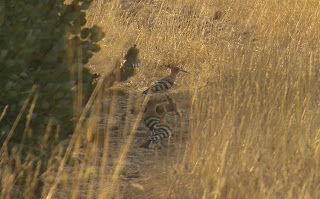 Later in the morning I spent a few hours trying to see some raptors on the grassy rocky slopes of mount Nanos. The raptor-watch session went well, except I didn't see any of the usual Golden Eagles. I was told an adult bird was found dead some time ago, so this could be the cause of their absence. Anyway what I got on the raptor front was: 1 BLACK KITE (heading S), 2 Sparrowhawks, 4 Common Buzzards, +5 Honey Buzzards (one also displaying with the characteristic "applause"-see pics), +7 Kestrels, 1 Goshawk and 6 Griffon Vultures on passage (flew NW at 12.05 am).
Honey Buzzard's appaluse display (clapping the uppersides of the wings): 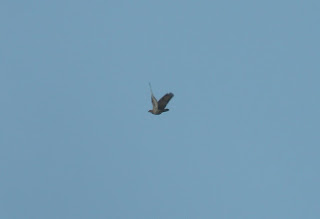 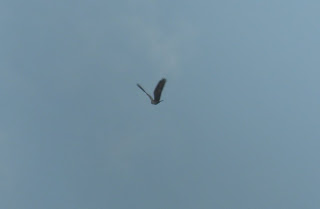 One of the six Griffons: 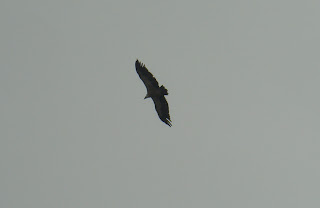 I was also quite glad to see my first 2 Wood Warblers of the autumn and 1 Lesser Whitethroat in the low pines on the wind-swept meadows. Overhead flocks of House Martins, Swallows and single Common Swifts were clearly on migration as well.
Other things of note included an odd Cormorant flying east (!), +14 Ravens, 1 calling Black Woodpecker plus usual woodland stuff.
I also had a very close encounter with an Alpine Chamois that trotted past me on the rocky grassland.
The Chamois then decided to plunge down into a ravine: 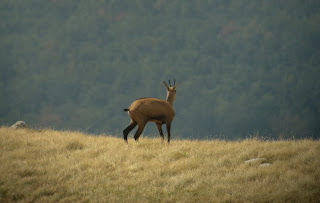 View on the grassy slopes of mount Nanos - the true top is hidden: 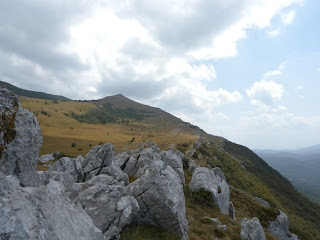 In the afternoon it was time for some woodland birding that took me in the Trnovo forest (Trnovski gozd), not too far from the northern-western slopes of mount Nanos. The forest was of course very quiet (not the best time to visit) but I managed to attract a Pygmy Owl with my superb whistle imitation! Also around were the usual forest species and upland goodies like Willow Tit, Goldcrest, Coal and Crested Tit, Crossbills ect. On the forest's edge I managed to pull out another few migrants in the form of a nice female Pied Flycatcher, a Spotted Flycatcher and a smart male Cuckoo flying over the road.
Cyclamen purpurascens: 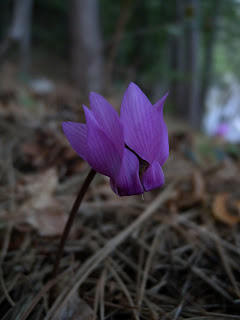 Southern slopes of the Trnovo forest: 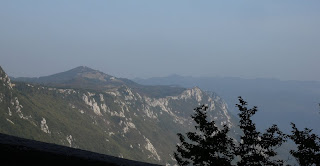 By the way... if you were wondering, the photo on the top of the post shows a forest sign in the Nanos area which signalises the presence of Brown Bears.
Posted by Domen & Sara at 12:38