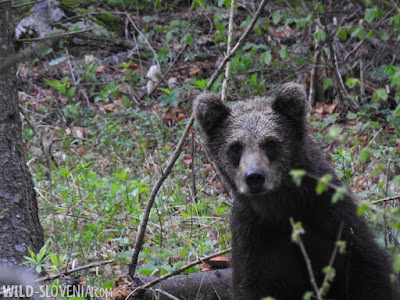 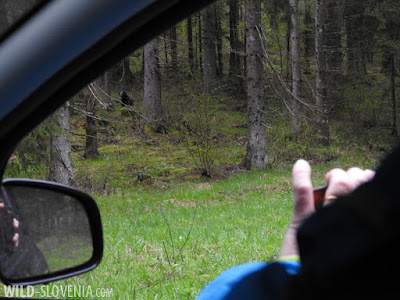 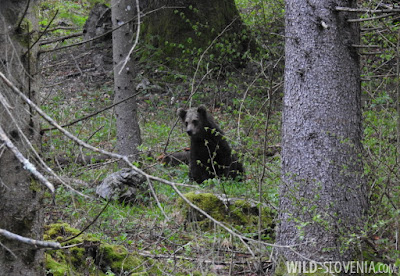 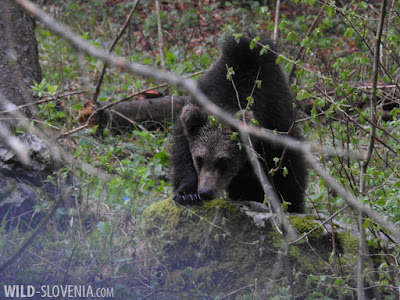 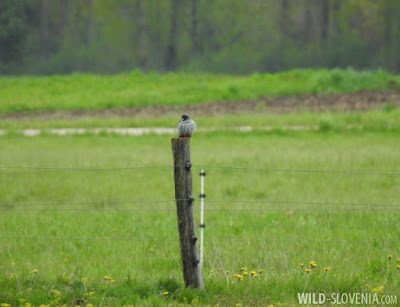 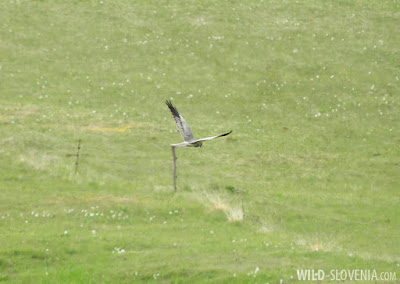 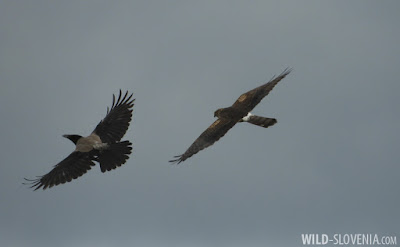 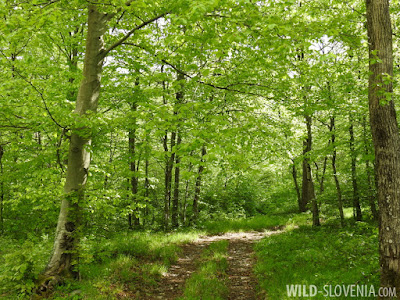 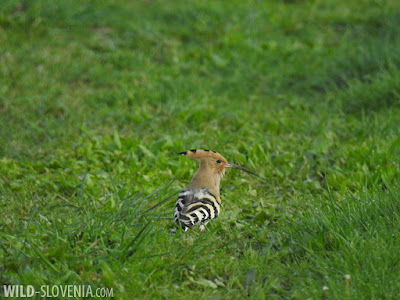 In the last few weeks we've been quite busy with various fieldwork, but were of course happy to spend a lot of our "working time" outdoors. Spring is now really in its full splendor: woodlands are lush green, flowers bloom everywhere and many of the "classical" summer migrants (birds) have already returned. We had different censuses to carry on, both in the Karst (on dry grassland) and in the Slovenian Istria (farmland areas), as well as the regular work at Škocjanski zatok NR.
In the Karst the iconic migrants like Cuckoo Cuculus canorus, Hoopoe Upupa epops, Wryneck Jynx torquilla and Scops Owl Otus scops are all back. A few days ago we observed again our local pair of Short-toed Eagles Circaetus gallicus, as well as a migrant Black Kite Milvus migrans (a rather scarce bird in Slovenia) and the first returning Red-footed Falcon Falco vespertinus.
Among butterflies certainly the Southern Festoon Zerynthia polyxena steals the show, although many other species are available at the moment, including the first Green Hairstreaks Callophrys rubi and Weaver's Fritillaries Boloria (Clossiana) dia.


Flowers now dominate the scene; mostly on open meadows, although some interesting species can still be found in the now increasingly shadier forests. In a small woodland near Divača we came across a group of ten Pale-flowered Orchids Orchis pallens in fine bloom. This is a rather scarce and localised species in Slovenia that favours light woodland and is among the first orchids to emerge in spring. 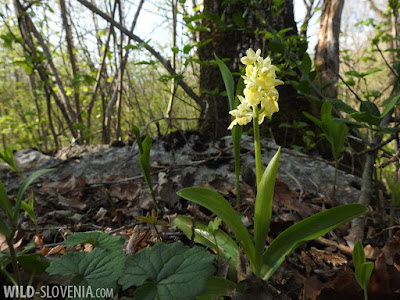 In the forest, woodpecker activity has somehow slowed down as most of the birds are now incubating. However we are still following the breeding of Black Woodpecker Dryocopus martius and Middle Spotted Woodpecker Dendrocopos medius close to home. This year we also decided to follow the movements of a local pair of Black Storks Ciconia nigra (a very rare breeder in western Slovenia) in the hope of finding a nest and confirm the breeding. So far we have observed the pair a few times, but we still need to narrow down our research. 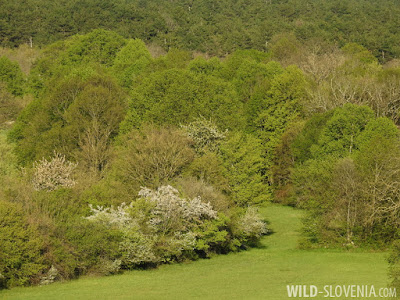 The karstic flora on dry grasslands is now dominated by the blue and yellow colours of Globularias and different Fabaceae, plus the purple spots of Green-winged Orchids Anacamptis morio - the commonest orchid of all. Some grazed/mowed meadows in the Karst are so full with wildflowers that is hard to walk on them without trampling on the orchids! Among the most interesting species at the moment there's also the scarce Slender-leaved Fritillary Fritillaria orientalis (in Slovenia only found in the Karst) as well as carpets of Poet's Narcissus Narcissus poeticus.
A bird census earlier last week, on some dry limestone grasslands also produced 4 Tawny Pipits Anthus campestris (a rare and localised breeding bird in Slovenia), along the commoner, but fast-declining Skylarks Alauda arvensis and Linnets Carduelis cannabina. 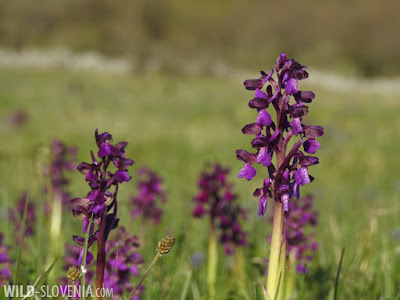 Some days ago we also made a quick afternoon excursion to the "High Karst" of the Javorniki mountains. Given the limited amount of time spent there we were very successfull as we heard & observed two spontaneous-drumming White-backed Woodpeckers Dendrocopos leucotos, close to the place where we carried out the species' census two weeks ago. In the evening we also heard singing Tengmalm's Owl Aegolius funereus and Pygmy Owl Glaucidium passerinum, as well as observed/heard up to 5 Ural Owls Strix uralensis.

Recently quite a lot of time was also spent in Istria, around the Slovene coast. Istria has a sub-Mediterranean climate and spring there is usually well in advance if compared to the rest of Slovenia. During a bird census in the farmland areas of Sečovlje and Strunjan we enjoyed several interesting birds, as well as plants and butterflies. Two migrant Hoopoes Upupa epops were feeding on a grass-covered path and showed pretty well for quite a while. Up to 12 singing Wrynecks Jynx torquilla were also nice to hear & see, as well as several Nightingales Luscinia megarhynchos, a Zitting Cisticola Cisticola juncidis, a Purple Heron Ardea purpurea and several Sardinian Warblers Sylvia melanocephala, not to mention the tens of Cirl Buntings Emberiza cirlus and Corn Buntings Emberiza calandra. 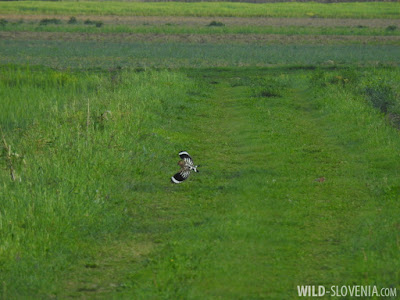 Among plants, the highlight at Sečovlje was the very rare Roman Hyacinth Bellevalia romana, a Mediterranean species known to grow at just a few sites in Slovenia. The woodland edges were already full of Lady Orchids Orchis purpurea, while among butterflies the most interesting find was the beautiful Green-underside Blue Glaucopsyche alexis, typical of this time of the year. Later we also recorded the latter in our garden. 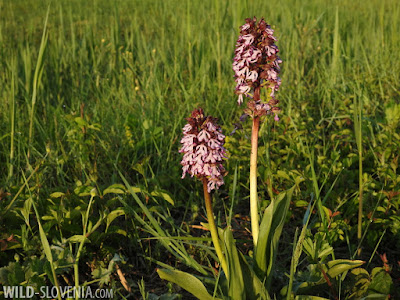 Meanwhile spring migration is kicking in at Škocjanski zatok NR too, with lots of migrants around in the past week. Among the most interesting observation are certainly 2 Red-rumped Swallows Cecropis daurica (rare migrant), 1 Whimbrel Numenius phaeopus (scarce migrant), 2 Avocets Recurvirostra avosetta (scarce visitor at the reserve), 1 Spoonbill Platalea leucorodia, 2 Little Crakes Porzana parva and up to 4 Purple Herons Ardea purpurea (one pair bred at the reserve for 2 consecutive years... fingers crossed!). Common Terns Sterna hirundo have also returned in good numbers like every year and are preparing to nest at their colony in the lagoon.