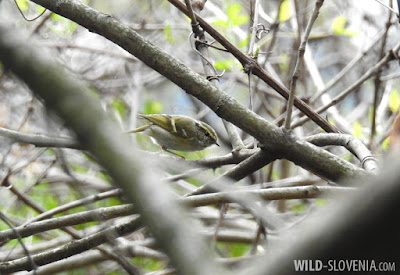 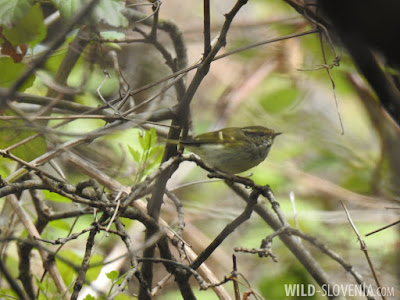 Just a short post dedicated to a little rarity we found yesterday. While checking a site for Wallcreeper Tichodroma muraria along the Karst edge, we stumbled across what is possibly one of the biggest rarities we've ever found in our lives: a stunning Pallas's Leaf Warbler Phylloscopus proregulus! If accepted this would be only the 2nd record for Slovenia - it is indeed a mega for the country!! The tiny warbler was feeding in a thermophilous woodland, where it has probably overwintered in the company of many Blackcaps Sylvia atricapilla, Robins Erithacus rubecula and Chiffchaffs Phylloscopus collybita. Due to its restless behaviour and the dense vegetation, it was rather difficut to obtain good views of the bird. Hovewer the warbler was in full spring mood and was singing almost constantly, whereas it rarely delivered its calls. This helped in locating the bird and obtaining a few photos for documentation. In the above video you can hear its distinctive song, which is unlike any of the similar Phylloscopus warblers (Yellow-browed & Hume's). It sounds like a prolonged and enriched song of a Willow Warbler Phylloscopus trochilus. The bird was visiting more or less the same patch of bushes and trees for most of the afternoon, so it's probable it will remain there. We guess it overwintered there, as the location is quite suitable and moreover March is a rather odd time for a migrant Pallas's Leaf Warbler. 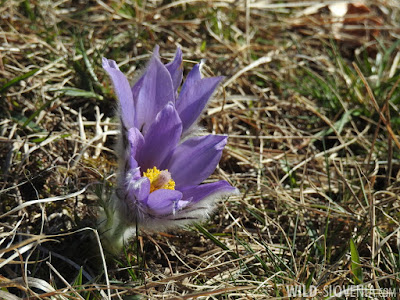 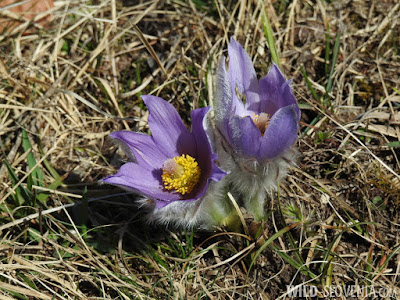 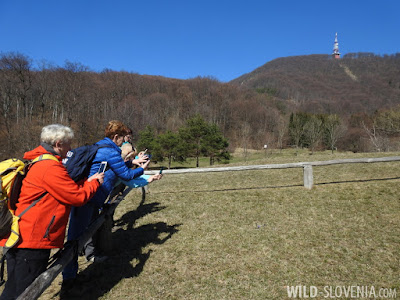 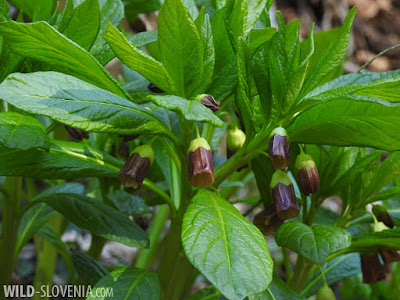 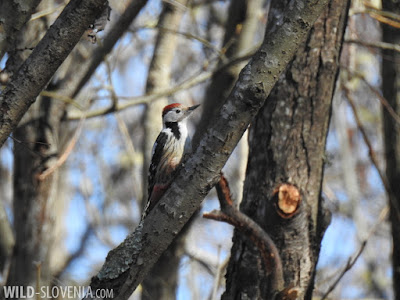 In recent weeks we've been quite busy with our traditional census of Middle Spotted Woodpecker Dendrocopos medius in western Slovenia, particularly in the Karst. Since 2016 we've been carrying out the census with the standardised playback method, usually with the help of other DOPPS-BirdLife Slovenia's volunteers (who we sincerely thank!). This year we decided to repeat the census in some areas we first investigated in 2016, as well as try to discover new territories, especially in the Karst. Currently we still need to carry out some of the census transects, but we already covered most of the areas of interest during the past week. So far the census has been a major success, with at least one Middle Spot recorded on every transects, but higher numbers were usually the norm. We are particularly happy with the results from the Brkini hills, where two transects (with approx. 8 census points each) held 13-14 individuals, while a trasect in a large area of oak woodland in the western part of the Karst held 7 individuals. Therefore this year we discovered several new territories on previously unknown locations for the species. All in all it looks like the species is fairly common in the right habitat, but is probably also expanding its range westwards, year after year. For more about the species in western Slovenia see here. 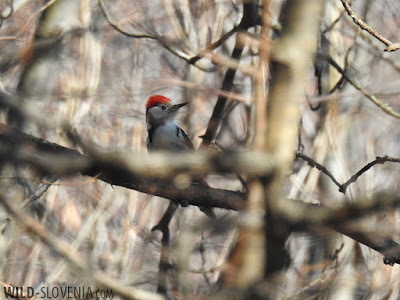 During the first day of the census and even before recording the first Middle Spot, we were taken by surprise by a large raptor that we flushed in the oak-beech forest. It was a beautiful Ural Owl Strix uralensis - probably one of the 3 individuals we've been observing in recent years as wintering and erratic birds in the wider area of this observation. As we had a census to carry on, we didn't have much time to follow the owl's movements, but when it disappeared in the trees, it even delivered us a few spontaneous notes of its song.

Other forest wildlife was also to be enjoyed during the censuses. On one point we found a Black Woodpecker Dryocopus martius excavating a nest hole, while the usual 4 other woodpecker species were also commonly heard/seen. Interesting was the presence of some singing Treecreepers Certhia familiaris, sharing their territories with the commoner Short-toed Treecreepers Certhia brachydactyla. There aren't many areas in Slovenia where the two species live in the same habitat.
The forest flora was (and still is) on good show and the plants we enjoyed most were certainly Dog's-tooth Violets Erythronium dens-canis, covering the woodland floor in some areas. It was also nice to see year's first Hacquetias Hacquetia epipactis, one of Slovenia's most typical spring wildflowers.

In an area of open meadows in the Brkini hills we also observed probably winter's last Great Grey Shrike Lanius excubitor and the year's first copper - a Small Copper Lycaena phlaeas.
Last weekend we also attended DOPPS' yearly Eagle Owl census in the Karst and checked our traditional site, where male and female Eagle Owl Bubo bubo were singing at dusk. We even saw the male perched on top of a black pine, similar to last year's encounter. After nightfall a Tawny Owl Strix aluco began to call and then an unexpected group of 3-4 Golden Jackals Canis aureus started howling at the moon!

In the Karst, during one of the censuses we also stopped at a large pond, where quite a lot of amphibian activity was going on. Common Toads Bufo bufo were everywhere (about 15 specimen) and in full reproductive frenzy. Also a few Agile Frogs Rana dalmatina were around, although even commoner were their eggs in the pond. 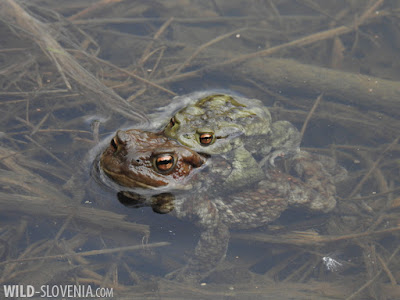 Meanwhile spring has also arrived to Škocjanski zatok Nature Reserve and in the last few days, we greeted the return of several migrants. The year's first Swallows Hirundo rustica and House Martins Delichon urbicum arrived a few days ago and are now an almost daily sight, especially during spells of bad weather. Of course we were also super-excited by the appearence of two Hoopoes Upupa epops, chasing each other in the freshwater marsh.
Many of the wintering ducks have left, but Garganeys Anas querquedula have returned instead. Perhaps the most interesting sight at the reserve was a flock of Spoonbills Platalea leucorodia. Four of them descended in the freshwater marsh a few days ago, while another 8 appeared a few days later and finally a flock of 13 was observed today. These birds are not common in Slovenia and are only seen a few times a year during migration. A ridiculously-confiding male Little Crake Porzana parva, walking along the reserve's main path was also one of the highlights of the last days. It didn't show any signs of fear as we approached it down to 1,5 meters (see video). Two Spotted Crakes Porzana porzana were also feeding at the side of a reedbed, while 3 rather late Common Cranes Grus grus were migrating overhead. Other interesting birds observed recently at the reserve included: 4 Marsh Harriers Circus aeruginosus, 4 Black-winged Stilts Himantopus himantopus, 1 Black-tailed Godwit Limosa limosa, 1 Little Ringed Plover Charadrius dubius, 3-4 Lapwings Vanellus vanellus, 1 Ferruginous Duck Aythya nyroca, 1 Bittern Botaurus stellaris, 1 Stonechat Saxicola torquatus.
A nice European Tree Frog Hyla arborea was also seen in a small pond by the visitor's center, while among flowers the first Early Spider Orchids Ophrys sphegodes in bloom have officially opened the orchid season.
For more up-to-date information on the latest bird observations at Škocjanski zatok, follow the Reserve's official Facebook page. 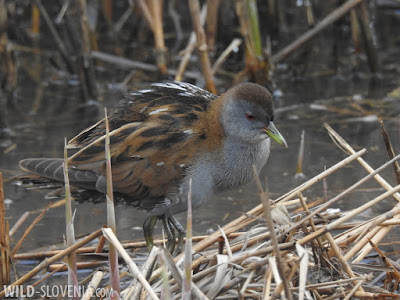 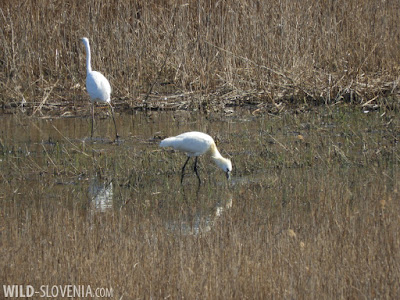