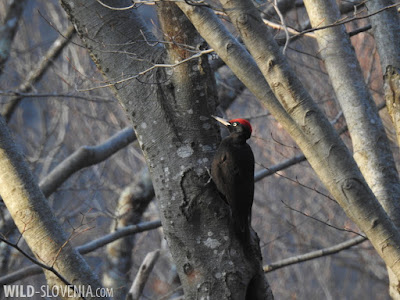 It's prime time for woodpecker activity at the moment. Since the end of February we've been following our local woodpeckers in two patches of woodland in the Karst. Up to 6 species can be seen during a short afternoon birding session in a relatively small area of a few hectares. This is, all European species except White-backed, Three-toed, Syrian Woodpecker and Wryneck (the latter hasn't returned from Africa yet). The best time for observing them is late afternoon when they prepare for roosting. A pair of Black Woodpeckers Dryocopus martius is using its two traditional (old) nest-holes for roosting and is thus easy to observe. The male arrives early at the roosting site and announces its presence to other males, as well as "calls in" the female. Then several noisy pair rituals follow and sometimes a third woodpecker intrudes and causes a bit of mess. Here's a video of the male drumming and entering the roost hole in the evening (raise the volume):


Middle Spotted Woodpeckers Dendrocopos medius on the other hand are more difficult to track down and we still didn't manage to find their roosting holes yet. However they can be frequently heard "mewing" at this time of year (like this). In a few days we'll begin with our traditional census of the species in the Karst and hopefully we'll discover some new breeding territories of this rather rare, but increasingly widespread woodpecker in western Slovenia.
Other woodpecker species are also making themselves prominent, including the common Great Spotted Dendrocopos major & Green Picus viridis, as well as the less common Lesser Spotted Dendrocopos minor & Grey-headed Woodpecker Picus canus. Trying to tell their territorial drummings apart is our popular pastime at the moment, especially now that we discovered that our local pair of Green Woodpeckers regularly drum as well (an otherwise uncommon and rarely-heard habit in most Green Woodpeckers).

Spring flora is also emerging on the woodland floor, although slightly slower and later than in other parts of continental Slovenia (see previous post). This is mainly due to the well-drained limestone soil of the Karst which makes growth rather tough for the plants that inhabit it. Several butterflies are also frequently seen these days and among the very common ones like Brimstone Gonepteryx rhamni (infesting our Forsythia), Large Tortoiseshell Nypmphalis polychloros, Peacock Aglais io ect, we've also seen several Nettle-tree Butterflies Libythea celtis. This south-European species is common in the Primorska region of western Slovenia and scarce or very rare elsewhere. As the name suggests, its life cycle is linked to the nettle tree Celtis australis, which in turn grows mainly along the coast and in more sub-Mediterranean areas. 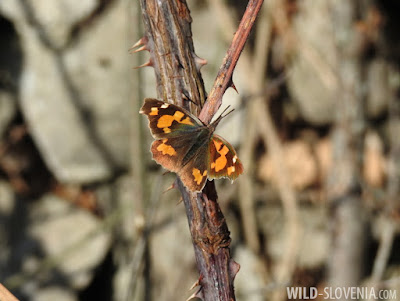 In the past two weeks there has been a massive migration of Common Cranes Grus grus over our skies. Birds wintering in Spain and the Mediterranean are now making their return journey to northern Europe and the first days of March represent the peak migration time for the species in our area. Large flocks have become increasingly common in recent years. Flocks of hundreds of birds have been observed almost on a daily basis since the end of February. Most flocks enter Slovenia thorough northeastern Italy and the Gulf of Trieste. We've been lucky to see or hear several flocks, including 44 over Škocjanski zatok (pics below), 107 over Sežana and about 50 over mount Nanos. A few days ago, we were even waken up in the middle of the night by the loud trumpeting calls of a flock of Cranes, migrating low over our house! 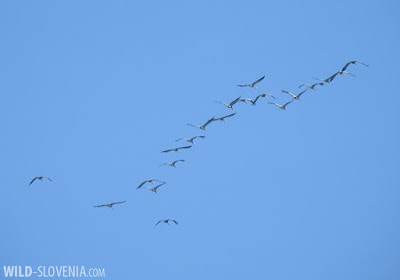 Apart from the occasional migrating Cranes, the situation at Škocjanski zatok Nature Reserve is rather quiet at the moment. Many wintering birds have already left, while others haven't arrived yet. The reedbeds are still hosting small numbers of wintering Bearded Tits Panurus biarmicus, although seeing them proves quite difficult. Making them company are flocks of Reed Buntings Emberiza schoeniclus and Penduline Tits Remiz pendulinus, while a recent playback census of Water Rail Rallus aquaticus yielded at least 12 singing birds in the small wetland. Among the most interesting birds we've observed recently are Ferruginous Duck Aythya nyroca, White-fronted Goose Anser albifrons and the first Lapwings Vanellus vanellus, while someone has already observed two returning Purple Herons Ardea purpurea (maybe the pair that bred here last year).

Meanwhile we also visited lake Cerknica where we finally observed the two wintering Smews Mergellus albellus, together with the usual flock of +20 Goldeneyes Bucephala clangula. Other wildfolwl was also well represented on the lake, including a large flock of 235 Pintails Anas acuta, hundreds of Teals Anas crecca and the first two Garganeys Anas querquedula of the season. By the shores of the lake was even a nice female Merlin Falco columbarius, hunting small passerines in an orchard, as well as a male Hen Harrier Circus cyaneus.