Today was sunny and quite chilly - actually the first day of real cold and sun in a while. Wallcreeper searching seemed a good idea, but at the end it didn't produced the hoped-for crimson butterfly-bird. This winter they are very difficult to see on the Karst and there has been just one single observation for the area as far as I know. The situation is a bit different in the Alps, where today 6 birds were seen by a single observer. Probably the lack of real cold until now has kept the birds up in the mountains.
Alpine Accentors instead are always present with small numbers. Today I saw two of them, feeding on the rocky slopes of the Glinščica/Val Rosandra valley. A pair of Ravens is now probably nesting in the area. A singing Mistle Thrush was also of note, along with 3 Rock Buntings on the ridge.
When there's a lack of birds, flowers are a real salvation on the Karst...even in winter. Today I found the year's first Crocus reticulatus (common species) and a nice carpet of Crocus weldenii (a rare Balkan endemism) - see last year's post.
Posted by Domen & Sara at 09:25 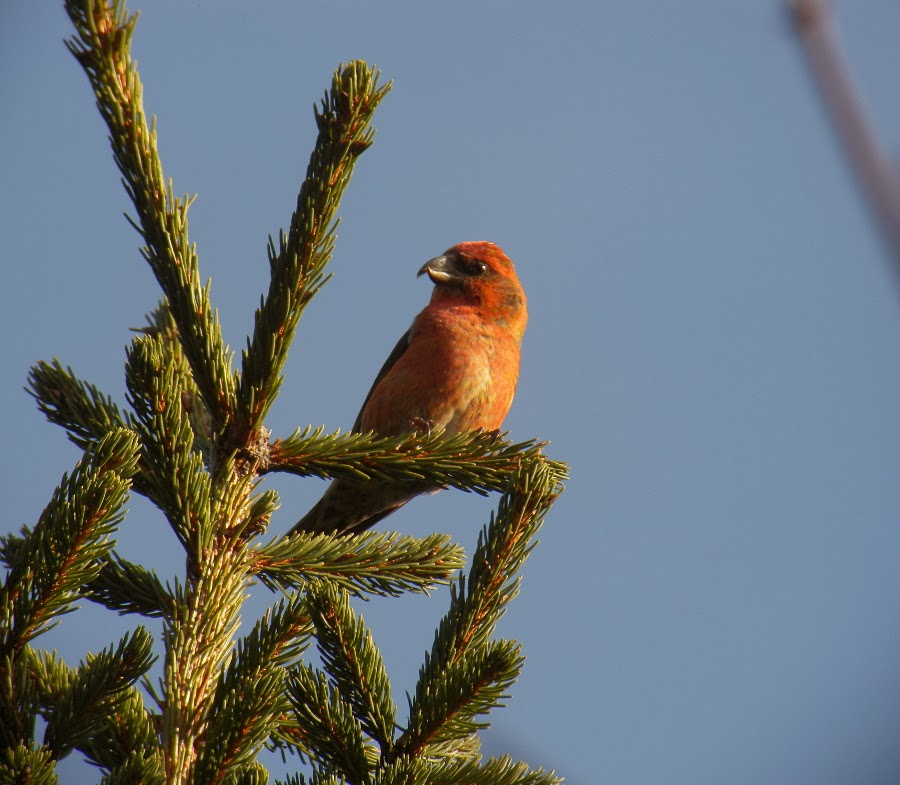 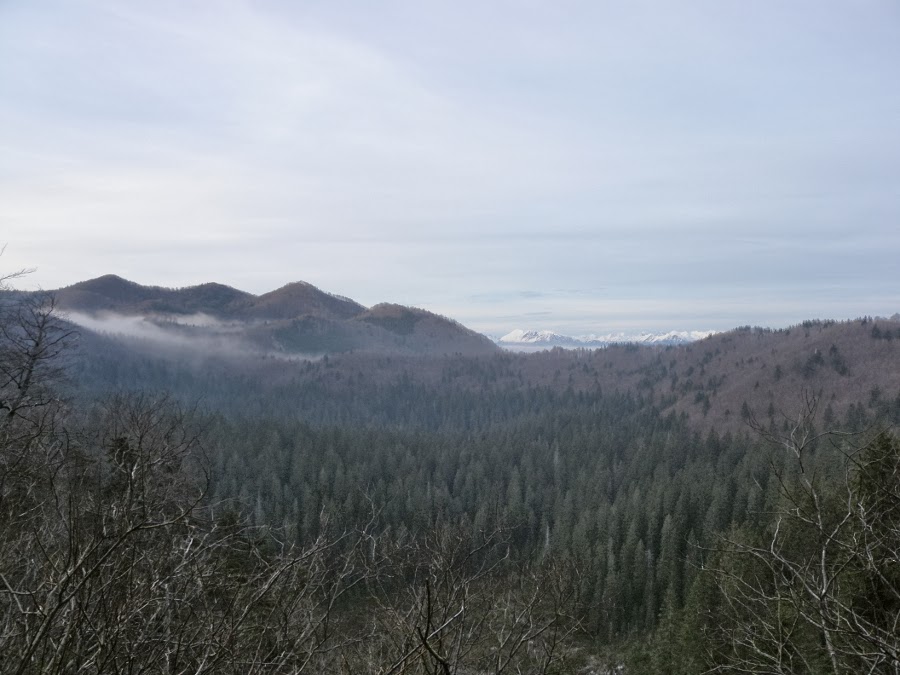 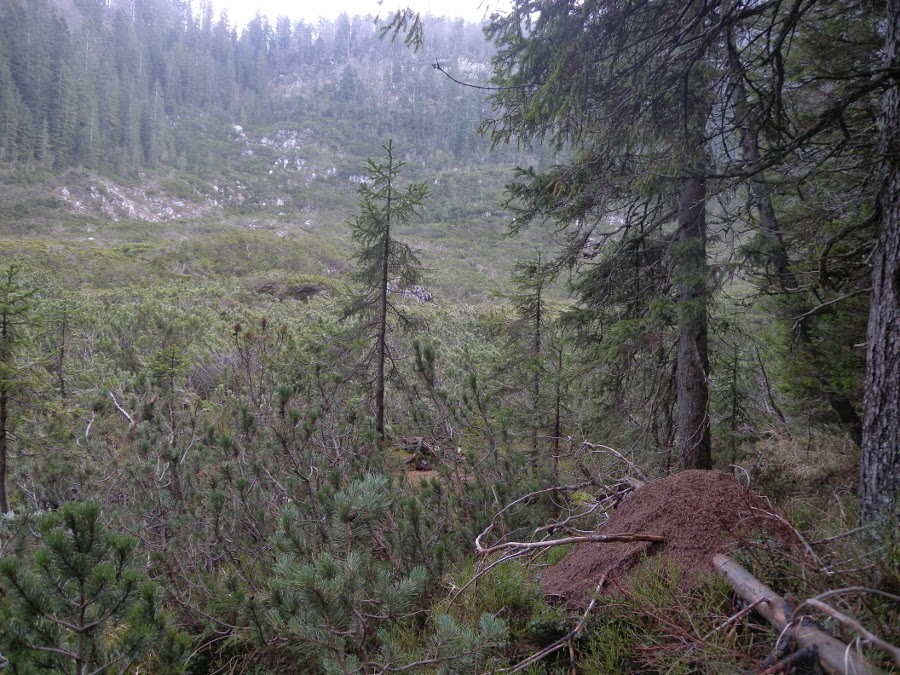 Visited the Trnovo forest (Trnovski gozd) with a friend today; once again with complete absence of snow and relatively mild temperatures. We took a nice walk down to the bottom of Smrekova draga - a karstic doline with vegetational inversion - mountain pine Pinus mugo and Norway spruce Picea abies are covering the bottom, as it's otherwise usual for the top of the mountains. The walk through the mountain pine stand was quite an experience! Best birds of the day were 2 singing PYGMY OWLS heard at dusk. Still quite a lot of activity in the forest, with Crossbill being the most obvious species - the above bird was part of a very collaborative and fearless flock. Otherwise quite a lot of Coal, Willow & Crested Tits, Goldcrests and 2 Ravens.
An out-of-place Cormorant was migrating above Predmeja; the Vipava valley produced 2 Great Grey Shrikes and a Peregrine with a freshly killed pigeon in the talons.
Posted by Domen & Sara at 13:01 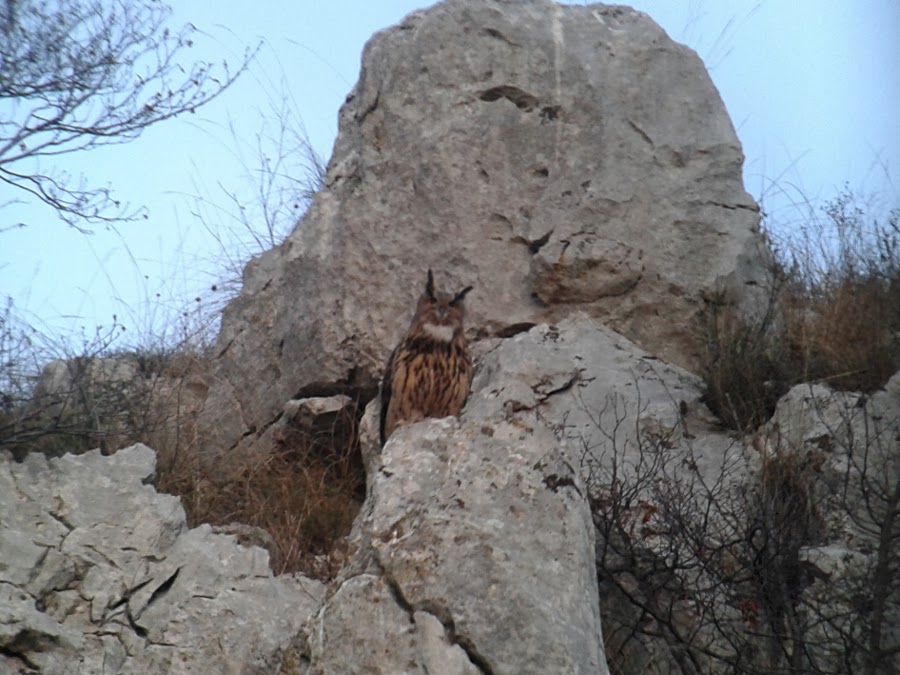 Above are the highlights of today's short afternoon stroll on the Karst. Saw a pair of singing Eagle Owls at dusk, 1 male Lesser Spotted Woodpecker and 2 Black Woodpeckers (m & f). All pics are phone-scoped.
Posted by Domen & Sara at 10:20 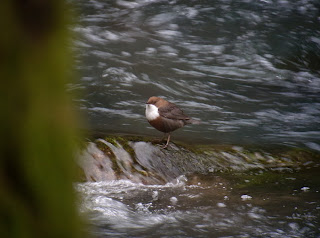 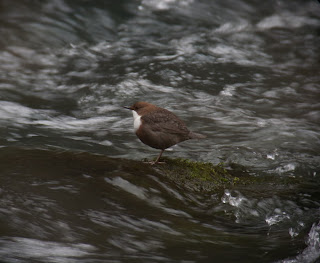 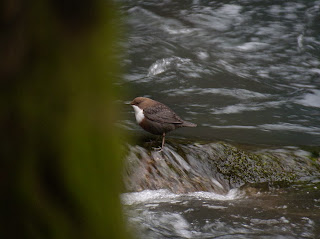 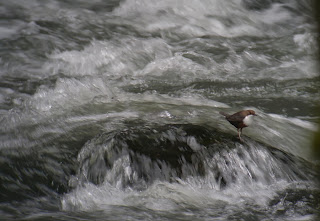 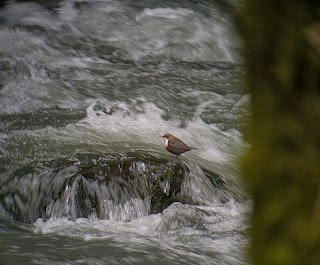 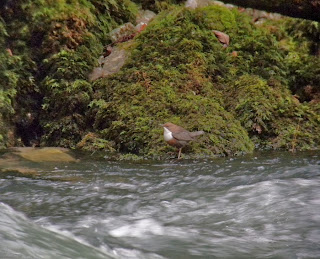 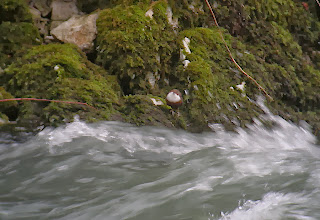 On the 1st of January I was early in the field in Slovenia, seeing my first birds of the year. One of them was the above DIPPER on the Unica river near Planina, which entertained me for quite some time in the morning. The water current was pretty wild (with an awful lot of water in the river), but despite that, the Dipper kept diving and swimming with a certain ease. I didn't imagine it could perch on the submerged rocks in the middle of the riverbed, where the current was the strongest... but it did. Amazing.
Next on plan was a visit of the Cerknica lake (Cerkniško jezero). The large water bodies held just a small portion of the usual wildfowl present in the area. Among a consistent flock of Coots I only managed to spot some 20 Goldeneyes, +25 Wigeons, 1 Gadwall and 2 Pochards. However the major highlight on the lake were 2 adult WHITE-TAILED EAGLES perched for most of the morning on some low poles in the lake's centre. Both birds were seen flying off from time to time. One of the two even took a bath in the lake and then went to perch back on the pole to dry the feathers in Cormorant-like fashion. Never seen anything like that.
Other birds of note around the lake included a Redwing (in a small flock of Mistle Thrushes), a pair of Grey-headed Woodpeckers (both on the same tree), 1 Great Grey Shrike, 3 female Hen Harriers, several Fieldfares, a flock of 14 Common Gulls and several commoner species like Yellowhammer, Brambling, Black Woodpecker, Hawfinch, Kingfisher, Grey Wagtail, Coal, Marsh, Crested & Willow Tit, Goldcrest and so on.
All in all an excellent start of the year in the field, even better than last year's.
Posted by Domen & Sara at 06:57