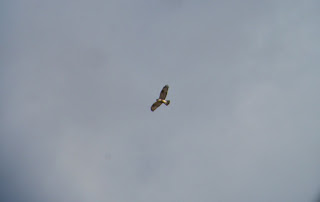 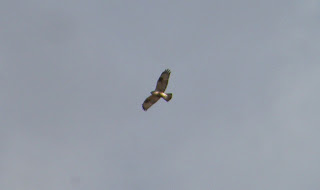 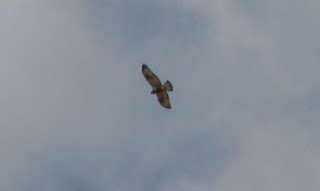 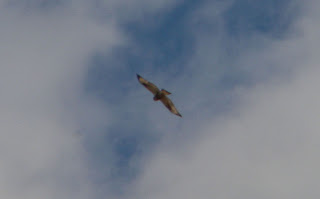 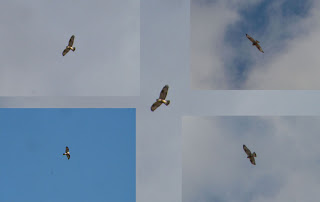 I've just spent a relaxed sunny Sunday having a family lunch in a restaurant in Divača (Slovenia). After the delicious and abundant meal I had the brilliant idea to take my mum on a short stroll in the nearby grassland (airfield) of Ležeški Gabrk. I was expecting to see the odd Great Grey Shrike... but instead I got far more than that. Approaching the airfield by car I immediately spotted a soaring Buzzard with a very white tail-base. At that instant I realised what kind of buzzard was that.
So I jumped from the car and had binoculars ready on it: *ROUGH-LEGGED BUZZARD*!! The bird glided slowly towards me, then started to soar above my head. On few occasions it tried a short hover. A few minutes after it rose so much up in the sky that I lost it. I was quite impressed by the overall whitness of the bird, contrasting with the dark carpal markings and brown belly. The white seemed just so pure and hoary that it was like the angelic form of a Buzzard.
This represents indeed one of my best finds in the last weeks! And by the way Rough-legged Buzzard is still considered a rarity here, so twice the enjoyment!
Unfortunately I had no telescope, so the above pics were made through the bins - binoscpoing works at times!
The Buteo lagopus was actually contending its airspace with a Common Buzzard and most surprisingly, a migrating female Marsh Harrier. A few Ravens were also nearby.

Later while driving back home, a flock of +100 Fieldfares near Lipica was also quite interesting to see.
Posted by Domen & Sara at 08:19

Merlin, Alpine Accentor, Wallcreeper - the best of winter on a sunny February day! 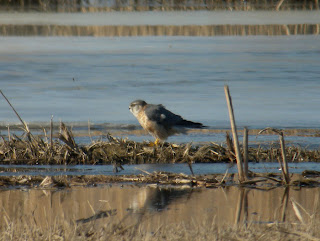 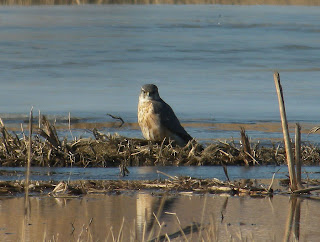 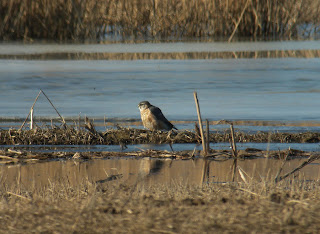 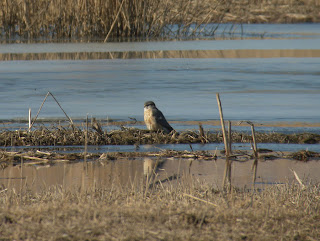 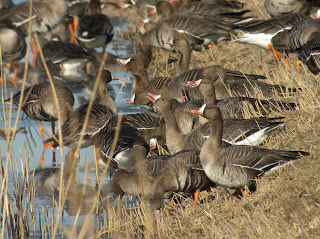 Škocjanski zatok NR: this morning I was back doing my monitoring, after several weeks of absence. The main water bodies were still frozen after the very cold spell. Wildfowl has decreased steadily, but was compensated with a flock of 474 White-fronted Geese. These birds are present in the area since the beginning of February (maybe even before), but numbers fluctuate between the 300 and 500 birds. As I said, today I counted 474 birds, grazing on the freshwater marsh (last pic above). The best bird in the area though was a nice male MERLIN that decided to perch on the ground in the grazing marsh - giving excellent views for 10 long minutes (pics above).
Other birds around included: 8 Little Grebes (!! where have all the grebes gone?), 4 Greylag Geese (among the White-fronts), 17 Wigeons, 1 female Pintail, 8 Shovelers, 35 Teals, 15 Pochards, 10 Tufted Ducks, 1 Buzzard, 496 Coots (steady numbers), 3 Curlews, 4 Greenshanks, 465 Black-headed Gulls, 48 Common Gulls (interesting and quite high number for the area), 6-7 CASPIAN GULLS (still several 1st winters in the area; some were very distinctive), 282 Yellow-legged Gulls, 4 Skylarks, 5 Water Pipits, 10 Penduline Tits, 23 Jackdaws and a flock of 30 Linnets on the saltings.
This 1st cy Caspian Gull was very obvious: 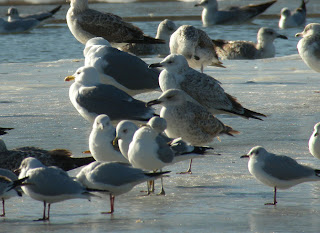 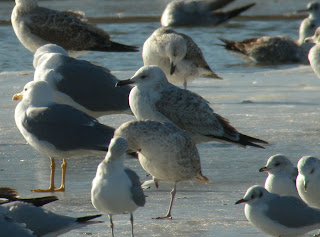 Goose flock on the grazing marsh: 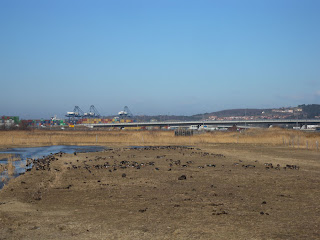 Early in the afternoon I enjoyed the warm sunshine on the cliffs of mount Stena - Glinščica valley, just out of Trieste. The first thing I saw when I got out of the car was a migrating flock of 35-40 White-fronted Geese heading north. Perhaps part of the flock from Škocjanski zatok...?
Initially the situation on the cliffs was very calm, with nothing of note apart from a Raven. I waited in silence for about 45 minutes. Suddendly some odd calls: quite metallic and... they were approaching. Few seconds after I was watching 2 ALPINE ACCENTORS flying over my head along the cliff ridge. Pity they didn't stop.
Then a Peregrine followed: it arrived in very quick flight from west (maybe from the town) and landed on its usual perch (see pic). From the colouring I guessed a female.
One last bird remained to be seen... But it was time to go. A last scan with bins on the cliff...and there it was: WALLCREEPER! Like my first one several years ago - same place, same circumstances: at that time I was leaving when I decided to take a last look at the cliff. That look gave me my first ever Walcreeper, flashing those crimson butterfly wings.
In the pine wooddland a few Crested and Coal Tits were of interest as well as a calling Black Woodpecker.
Peregrine: 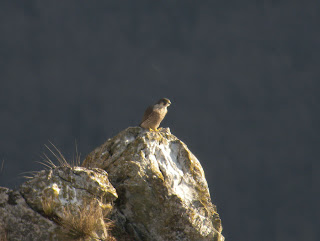