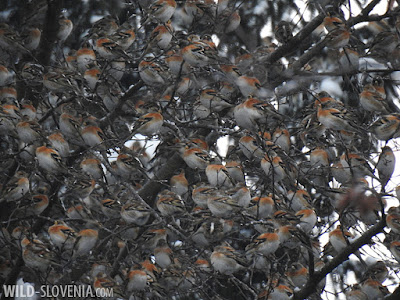 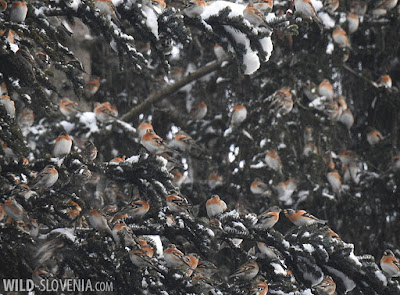 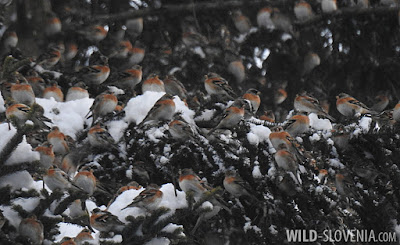 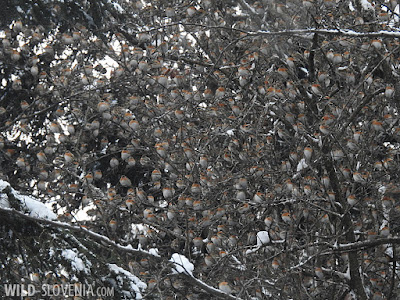 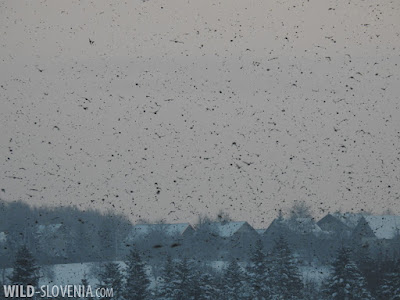 Slovenia is witnessing an incredible winter spectacle this year, as up to 5 million Bramblings Fringilla montifringilla gather every evening on a patch of forest only 5-10 hectares big, in the Zasavje region. Quite a lot has already been written about this amazing invasion, so we'll avoid repeating and keep our words short. You can read the full accounts here or here. An excellent video recorded by DOPPS - BirdLife Slovenia can be watched here.
This event is so exceptional that we couldn't miss it, so yesterday we payed our tribute to the mega flock. We observed the "river" of Bramblings flowing past our heads and later gathering at their roost. Needles to say, trees were completely covered with Bramblings and the noise was overwhelming!

A week in Extremadura (Spain) 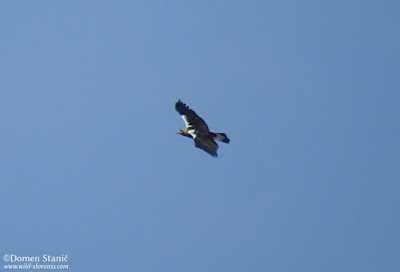 We are just back from a trip to Spain (hence the lack of updates during the past week). We posted a complete trip report with photos to our travel blog - you can check it here: Extremadura trip report
Posted by Domen & Sara at 03:00 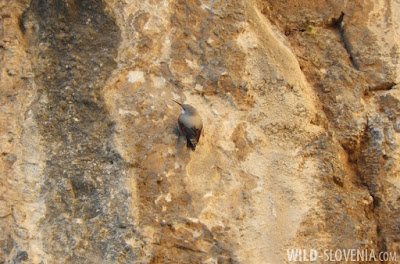 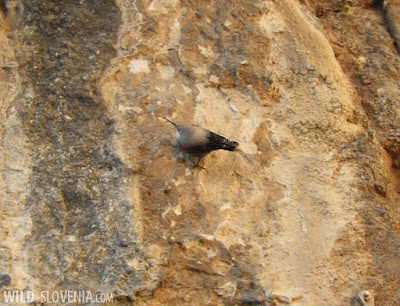 In the Karst, every winter we get the opportunity to spend some time with a truly rare and attractive little bird, the Wallcreeper Tichodroma muraria. The species actually breeds in Slovenia's alpine region, but is never easy to observe on its breeding grounds. On the other hand, birds descend to the limestone cliffs of the Karst in winter and are far easier to spot and observe in this region of southwestern Slovenia. At this time of year they are somehow predictable and move along an established route on a cliff, feeding as they go. The above video captured just that - the bird is constantly moving as it looks for invertebrates in crevices and fissures. We observed this individual today, on a well known cliff along the Karst edge, at a site we check a few times every winter. On the same cliff we also observed 4-5 Crag Martins Ptyonoprogne rupestris (an increasingly regular winterer in the Karst), a Peregrine Falco peregrinus and a small flock of Rock Buntings Emberiza cia. Birds are rather thin on the ground in the Karst at this time of year, but sunny cliff-sides prove rather interesting and usually produce a few but good species.
Some days ago while taking a stroll in a local oak woodland near Sežana we stumbled upon one of our favourite birds - a Middle Spotted Woodpecker Dendrocopos medius. The species, being a rare breeder in western Slovenia (although common in the east) is spreading its range westwards and is becoming increasingly common in oak woodlands throughout the Karst, especially in winter. This observation was interesting because it was made in a new area where we haven't seen the species before and rather close to our home too. Next time in the garden?