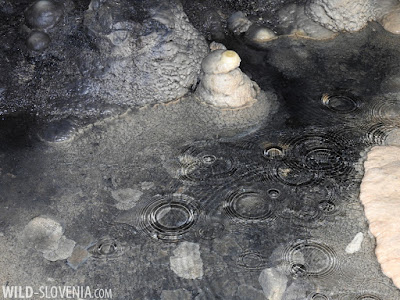 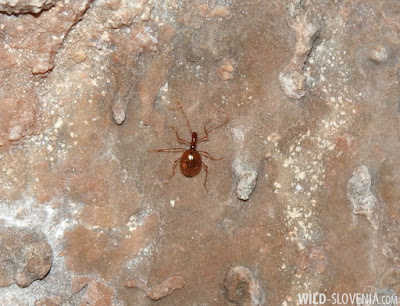 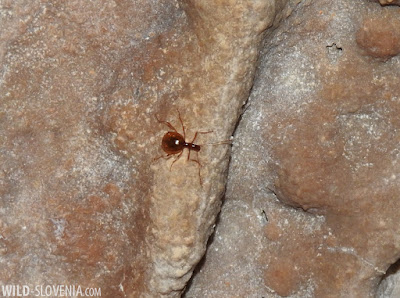 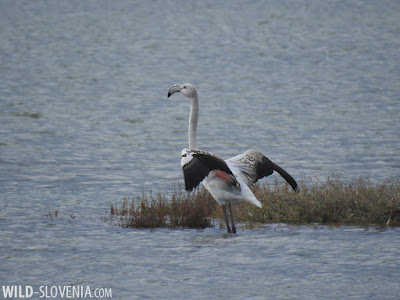 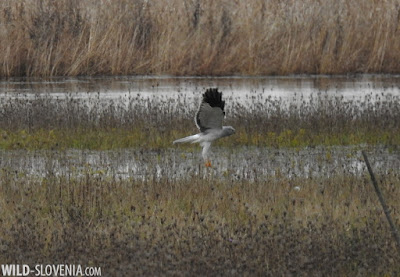 Short photo-post this time, due to lack of time, rainy weather, laziness and most of all... lack of wildlife - oh, it's November! Most of the recent birding has been either at work in Škocjanski zatok or in our garden in the Karst. There was nothing really special in particular, but rather some low-intensity seasonal birding. The highlight has been a Wallcreeper Tichodroma muraria, enjoyed during "working hours" along the Karst edge and a shy Ural Owl Strix uralensis in the forests by lake Cerknica. Other seasonal species included Northern Bullfinch Pyrrhula pyrrhula ssp. pyrrhula, Great Grey Shrike Lanius excubitor, Hen Harrier Circus cyaneus, Redwing Turdus iliacus and the local scarcities/rarities at Škocjanski zatok, featured in the above photos.
At this time of heavy rains and floods it is perhaps better to enjoy some typical geomorphological features of the Karst (karstic springs, swelling rivers, temporary lakes, roaring sinkholes ect.), rather than roving around aimlessly in search of wildlife.
Posted by Domen & Sara at 13:15 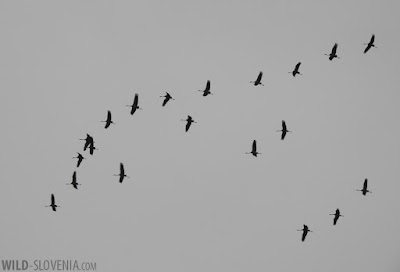 After the unusual spell of warm and sunny weather of the past weeks, now autumn (or winter?) is really upon us. The recent days have been amazingly cold and wintry due to the strong north-easterly burja wind blowing across western Slovenia. Many areas experienced the first sub-zero temperatures of the season and even the first snow in the mountains. Yesterday the skies cleared over much of Slovenia and the sunny, but cold weather unleashed the migration of Common Cranes Grus grus from the plains of Hungary. Apparently yesterday was THE day to be out and witness the large movements of these majestic migratory birds. Hundreds were reported from around Slovenia and we were also lucky to have chosen the right sites to go birding. Taking the weather into account, we headed for the Štajerska region to visit the country's migration hotspots near Maribor and Ptuj. By mid morning we were already watching a large flock of around 350-400 Cranes catching a thermal over the Medvedce reservoir and forming a "wedge" before flying west. Later we observed several other flocks, including around 50 over lake Ptuj, 12 near Pragersko and finally 80-100 low over the Medvedce reservoir in the evening. All in all we must have seen more than 500 Cranes, which is a rather good total for a day in Slovenia. Below is a video we recorded when the flocks were passing low - listen out for their loud and distinctive migration calls. 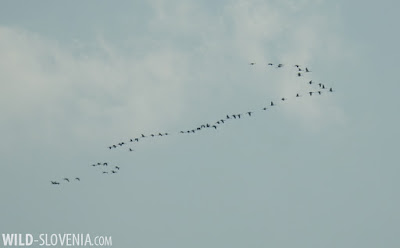 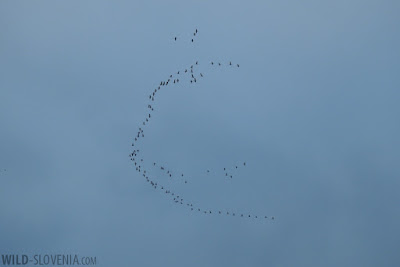 The Medvedce reservoir hosted a large flock of +1000 Greylag Geese Anser anser among which were also a few White-fronted Geese Anser albifrons. Two 1st winter Little Gulls Hydrocoloeus minutus were also of note for us, as we don't often observe this species in western Slovenia. A nice flock of migrating Lapwings Vanellus vanellus and the first Bittern Botaurus stellaris of the winter season were also good to see.
Nearby, the large reservoir lake of Ptuj held good numbers of wildfowl, among which Tufted Duck Aythya fuligula and Pochard Aythya ferina were the commonest as usual. Among the early winter arrivals were 4 Goldeneyes Bucephala clangula and a Red-throated Diver Gavia stellata. A migrant Grey Plover Pluvialis squatarola, good numbers of Pygmy Cormorants Phalacrocorax pygmeus and several Goosanders Mergus merganser were also of note. However we were most happy when an adult White-tailed Eagle Haliaeetus albicilla, a rare breeder in Slovenia, glided above the lake. At the fishponds of Rače we observed another Little Gull Hydrocoloeus minutus and some Ferruginous Ducks Aythya nyroca, the latter having the largest Slovenian breeding population right in the Štajerska region. Other interesting birds at various sites were also Water Rail Rallus aquaticus, Crested Lark Galerida cristata, Great Grey Shrike Lanius excubitor and a White Stork Ciconia ciconia taking a nap on its old nest.


Last week's bird monitoring at Škocjanski zatok which took place during an overcast and misty autumn day was also quite productive in terms of migrants. The most interesting species was a beautiful male Northern Bullfinch Pyrrhula pyrrhula ssp. pyrrhula. This bird seemed a bit out of place at this coastal wetland and it was indeed a new species for the reserve. We identified the bird by its distinctive trumpeting call. Birds with such calls have a north-European or Siberian origin and are usually referred as "Trumpeting", "Komi" or "Northern" Bullfinches. Morphologically they are almost identical to "our" ordinary Bullfinches, except for they are slightly bigger and have colder colour tones. They are known to make irregular winter irruptions into continental Europe, including Slovenia. Apart from the bird at Škocjanski zatok we also observed/heard at least 4 other Northern Bullfinches this autumn, mostly in the Karst.
During the monitoring we had a large flock of finches containing many Bramblings Fringilla montifringilla, Linnets Linaria cannabina and Hawfinches Coccothraustes coccothraustes, feeding with Water Pipits Anthus spinoletta and Meadow Pipits Anthus pratensis on the wet meadows, while some Redwings Turdus iliacus were also in the hedges. A typical late-autumn migration scene. The freshwater part of the reserve also had a White-fronted Goose Anser albifrons and a migrant White Stork Ciconia ciconia, while the lagoon is still home to the lingering juvenile Flamingo Phoenicopterus roseus. A lonely Swallow Hirundo rustica was probably our last one for this year. 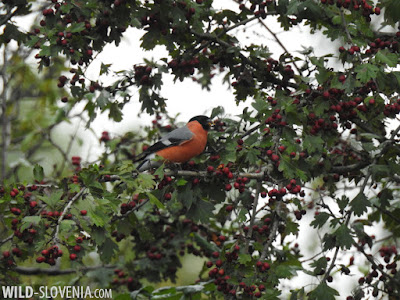