Garden birds in the Karst 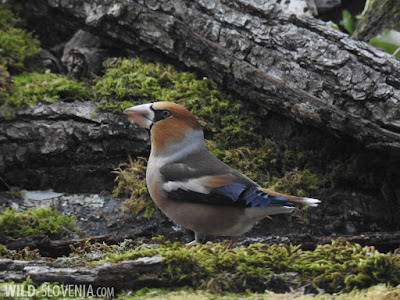 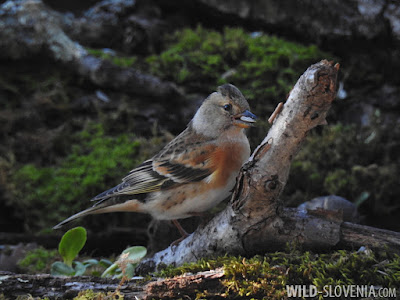 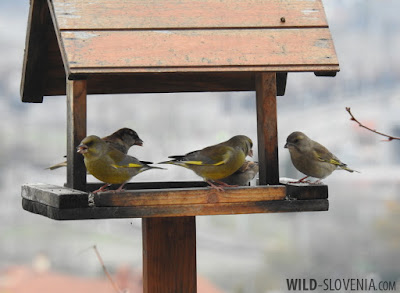 November has always been a quite depressing and slow month for wildlife watching. Days are becoming incredibly short, outside is cold or wet and there's a certain lethargic feel in the air, an impulse for going into hibernation. These days almost the only regular birding we do is from our bedroom's window onto the birdfeeder in our karstic garden. The situation is quite lovely actually. Species like Hawfinch Coccothraustes coccothraustes (up to 3), Greenfinch Chloris chloris (up to 5) and Goldfinch Carduelis carduelis (3-4) are present almost non-stop on the feeder, as are good numbers of Blue Cyanistes caeruleus & Great Tits Parus major, an occasional Marsh Tit Poecile palustris, Robin Erithacus rubecula and House Passer domesticus & Tree Sparrows Passer montanus. When the weather gets colder small numbers of Bramblings Fringilla montifringilla appear too. One of the most exciting recent encounters was with a flock of Rock Buntings Emberiza cia that came feeding in the cabbage patch in our vegetable garden. These birds are typical for the Karst and are quite abundant in western Slovenia on rocky slopes, screes and along limestone cliffs. As they like to feed on bare ground they sometimes visit large gardens and orchards in winter in search of small seeds. So far we've been lucky to have them a couple of times, so maybe they'll return. 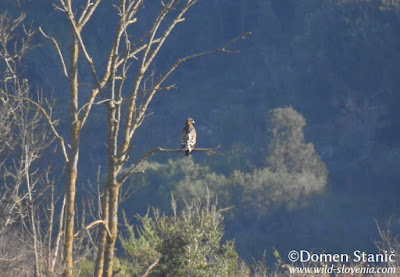 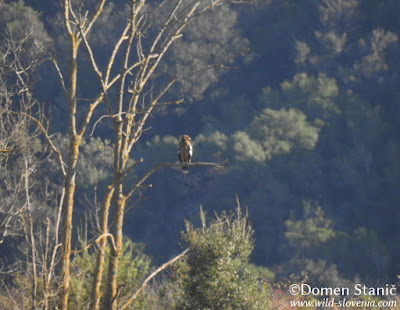 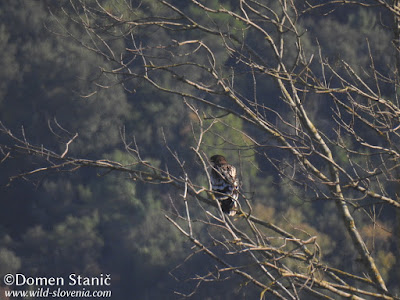 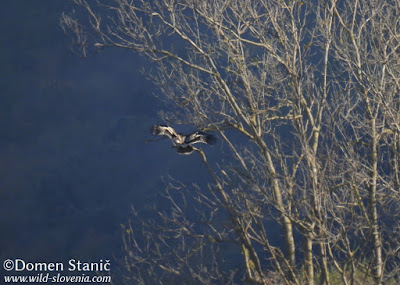 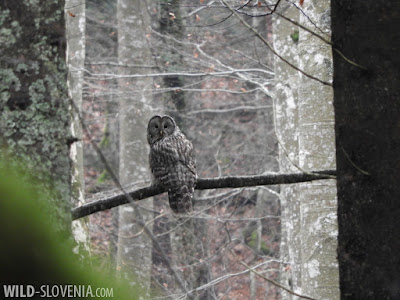 The colourful autumn season in the Dinaric mountains is coming to an end and is giving way to the overall grey and dull atmosphere of late autumn. Lower down, in the oak & beech woodlands of the Karst of western Slovenia, the situation is still slightly better as the season proceeds more slowly and the colour spectacle is in full swing at the moment.
Last weekend we took a couple of friends out birding on lake Cerknica and in the Snežnik forests. The temporary lake was finally a proper lake full of water (after several months of drought). The recent abundant rainfalls enlarged the local streams and made karstic springs burst with water. The typical karstic "polje" (flat fields with karstic springs) have now turned into lakes. Despite all the water, the lake was quite poor with birds. Nevertheless the situation was quite lively in the woodlands, open meadows and small villages around the lake. Among the most interesting birds was a male Merlin Falco columbarius sitting on a distant bush, a pair of Hen Harriers Circus cyaneus, a Great Grey Shrike Lanius excubitor and nice noisy groups of "autumn passerines" including Redwing Turdus iliacus, Brambling Fringilla montifringilla, Siskin Carduelis spinus, Crossbill Loxia curvirostra, Bullfinch Pyrrhula pyrrhula, Hawfinch Coccothraustes coccotharustes and quite a lot of Mistle Thrushes Turdus viscivorus, defending their mistletoes. Among proper waterbirds were just some small numbers of common wildfowl, Water Rail Rallus aquaticus and Kingfisher Alcedo atthis.

After checking the lake we retreated into the Dinaric forests of the Javorniki and Snežnik mountain chain. These proved of course very interesting, as usual. While driving on one of the many forest roads we spotted the characteristic dark shape of a Ural Owl Strix uralensis, perched at mid height in some trees a few meters away from the road. As it frequently happens with birds like these, the individual was in hunting mode and completely immersed in its duties. We stopped the car and watched it for about 15 minutes, before it decided to fly off, deeper into the forest. On closer inspection we realised it was a grey-morphed female from a local pair we already knew and which we observed several times, a few hundred meters away along the same road. In the photos below note the dark barring on the facial mask (not pure-white) - a typical feature of a grey-morph individual. 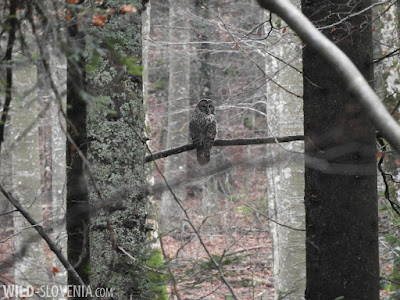 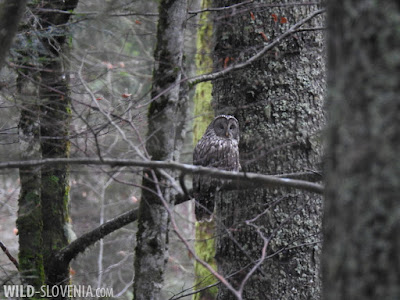 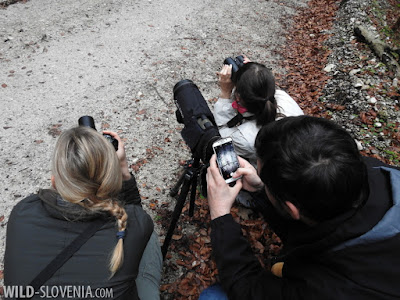 During another stop along the same road, we happened to park the car right under a spruce with a woodpecker in action. We could only hear the bird flapping its wings as it flew away from us, but as it landed on another distant tree, we were absolutely excited as we put our bins on it: a male Three-toed Woodpecker Picoides tridactylus. It remained in view for only about a minute or so, but we nevertheless managed to get in in the scope and have excellent views.

Other woodpeckers were also available in the form of 2-3 Black Woodpeckers Dryocopus martius (heard only) and 2 Grey-headed Woodpeckers Picus canus (1 seen), while in the evening we also heard a distant Pygmy Owl Glaucidium passerinum making its distinctive "autumn call".
As it can frequently happen in these forests, the final surprise comes right at the end of the day. As we were driving back home through a forest road in the Javorniki mountains, we were fortunate to see a Brown Bear Ursus arctos. If it wasn't for Sara, who spotted the young bear from the back seat of the car, we would have certainly missed it! The bear was some 5 meters away from the road, on a rocky slope and even rose on its rear legs to inspect the surroundings. After checking us calmly it slowly (but still too quickly for taking any photos!) disappeared into the vegetation. It was the most perfect ending to a long day's birding in Notranjska!
In the forest we also found some fresh fungi, all new after the recent rainfalls; below are some of the most interesting. 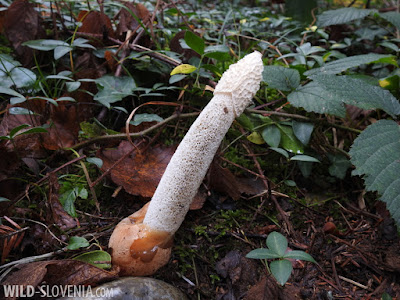 Meanwhile in the warmer Karst of western Slovenia the forest streams in the flysch (mudstone) hills are also full of water and the leaf litter is completely sodden. During a few short walks near Sežana we observed several Fire Salamanders Salamandra salamandra wandering about the forest floor. These interesting amphibians are widespread in Slovenia and live in woodlands, never far from a nearby source of water (stream, pond...). They are strictly nocturnal, but can be seen roaming around at daytime after rainfalls or when the forest is wet enough. This is the pefect time of the year to spot one - during 3 recent visits we observed at least 6 different specimens. 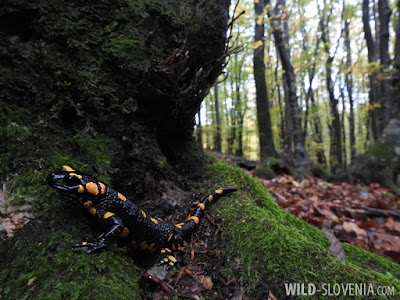 With all the recent wet and rainy weather the temperatures kept unusually warm for the season. Thus we are still seeing quite a lot of butterflies on a daily basis. Species such as Red Admiral Vanessa atalanta, Brimstone Gonepteryx rhamni, Speckled Wood Pararge aegeria and Small Copper Lycaena phleas are pretty usual at this time of the year, as well as the odd Hummingbird Hawk-moth Macroglossum stellatarum. However yesterday we were quite amazed to see a Nettle-tree Butterfly Libythea celtis at a woodland's edge in Sežana. This small butterfly, linked to the Nettle-tree Celtis australis for the development of its larvae, is a migrant and thus can be regularly found in unusual places, away from its food plant. In Slovenia the species is present mostly in the warmer western part of the country. Certainly the last decend butterfly we see this year! 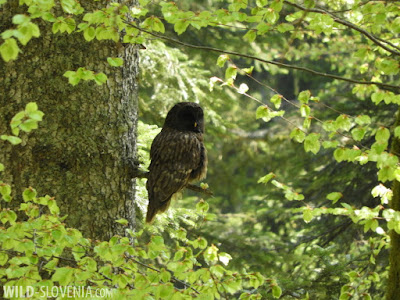 Recently we updated our website and included a new page - Birding in Slovenia, which gives an overview about the bird species diversity of Slovenia. It also includes a selection of the best birding sites in the country and a phenological check-list of the most interesting species. Hopefully it will help visiting birders with the basic info about our birdlife. You're welcome to take a look inside!
Posted by Domen & Sara at 09:14