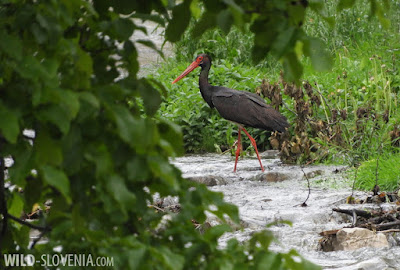 It's been another intense week in the field and given the fine spring weather we've made the most of it. We started with the usual weekly bird monitorings at Škocjanski zatok NR, but more about that at the end of the post. Now we'll first begin with a fantastic morning spent in the Vipava valley in western Slovenia. The primary target was to monitor the Lesser Grey Shrike Lanius minor, a now very rare breeder in Slovenia. A few pairs usually breed in the Vipava valley and represent the population's stronghold in the country. We were glad to see that at least two adults returned from Africa, to breed at their traditional site. However there should be a few more at the site, so hopefully we'll catch up with the other pairs later in the season.

The overcast weather during the census meant there were many other interesting birds around, especially migrants. On top of the list goes a stunning male Black-headed Bunting Emberiza melanocephala that we found at the end of the census. This Mediterranean species used to breed in Slovenia in the past, while nowadays it is only a rare and irregular passage migrant, with occasional breeding attempts in the south-west. It was the first time we've observed this species on migration, outside from its usual breeding strongholds (mostly in Croatia). 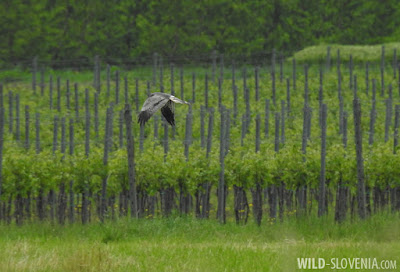 While driving back home through the Vipava valley, our attention was drawn to a small stream flowing through a village, where a large dark bird was wading in the shallow water: a stunning adult Black Stork Ciconia nigra! We stopped to have a closer look and managed to watch the bird for several minutes, some 30 meters away from us, before it took off and circled in the sky.
The species, a very rare breeding bird in this part of Slovenia, is being regularly observed in the Vipava valley in recent years. Our bird certainly belongs to the pair breeding in the surrounding deciduous forests. However it was far from usual to see such a shy bird, fishing in a stream within human settlements. A rare and priceless encounter!

As we continued our drive home we stopped along the road two more times. The first time we located a noisy family of Middle Spotted Woodpeckers Dendrocopos medius in some oaks at the side of the road. Two adult birds were feeding at least two juveniles that must have just fledged nearby. This is an excellent record as it confirmes the nesting in this area, where censuses were made in 2016 but the species was not found back then. Later we stopped a second time when a beautiful Hoopoe Upupa epops decided to feed at the side of a main tarmac road, just few meters in front of the car! 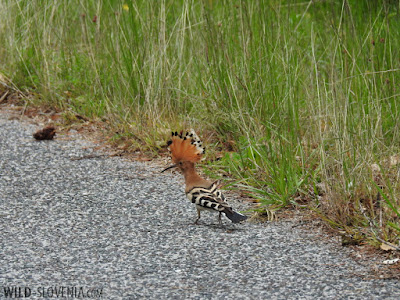 The next day we enjoyed some more Hoopoes, Melodious Warblers Hippolais polyglotta, Red-backed Shrikes Lanius collurio, Golden Orioles Oriolus oriolus and other common birds during another census in an area of dry karstic meadows. We were rather relieved to see again some butterflies (after the past colder weeks) including the first Marsh Fritillaries Euphydryas aurinia and Glanville Fritillaries Melitaea cinxia of the year, as well as some blues. A rather gigantic Aesculapian Snake Zamenis longissimus crossing a gravel road was also a highlight.


And now finally to the coast. This week at Škocjanski zatok we managed to pull out another new species of bird for the reserve - Common Rosefinch Carpodacus erythrinus (the 255th species at the site). The encounter was rather brief and involved a singing 1st winter male (not a nice, scarlet adult) on the top of a tall tree in front of the visitor's center. Rather more pleasing was the prolonged sight of a Caspian Tern Hydroprogne caspia (a rather rare migrant in Slovenia), fishing in the freshwater marsh. Apart from the usual species, the brackish lagoon also hosted 4 Spoonbills Platalea leucorodia and 5 Ringed Plovers Charadrius hiaticula, while in one of the ditches along the path we also observed the iconic Water Scorpion Nepa cinerea and several Diving Beetles Cybister lateralimarginalis.

This week we also carried out a monitoring of farmland birds in the Slovenian Istria, where among others we saw Tawny Pipit Anthus campestris, Bee-eater Merops apiaster, loads of Melodious Warblers Hippolais polyglotta, Zitting Cisticola Cisticola juncidis and a few Hoopoes Upupa epops. Even more interesting than birds were some plants we found in farmland environment, some being typical representatives of the Mediterranean flora and only found in the extreme south-west of the country. 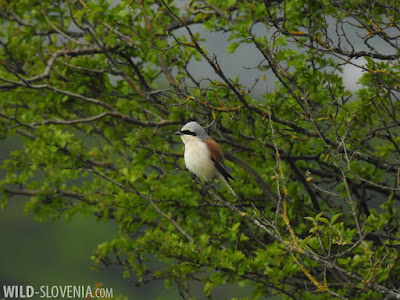 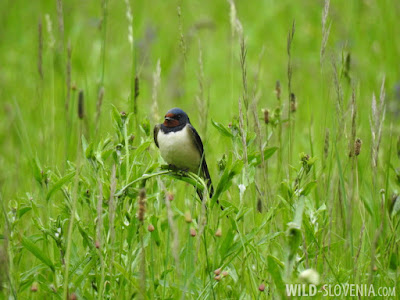 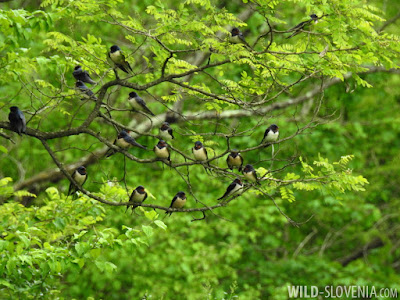 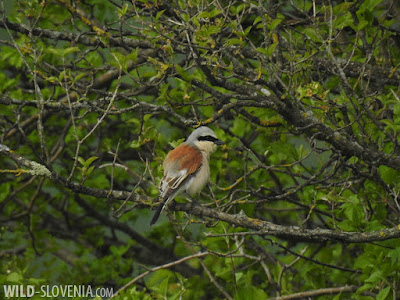 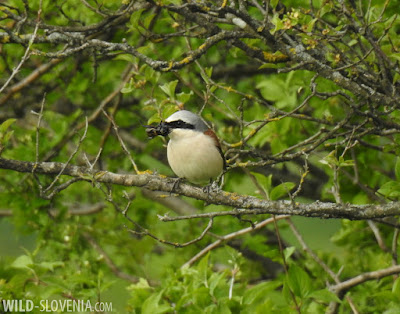 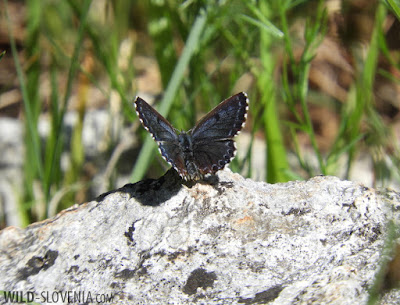 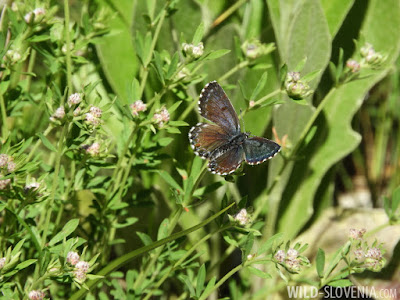