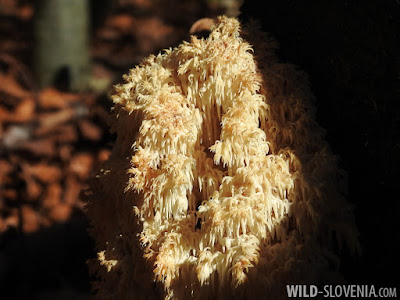 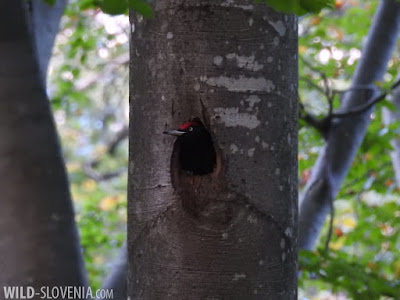 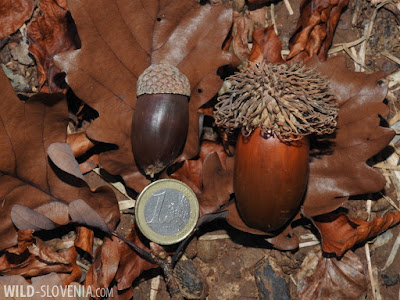 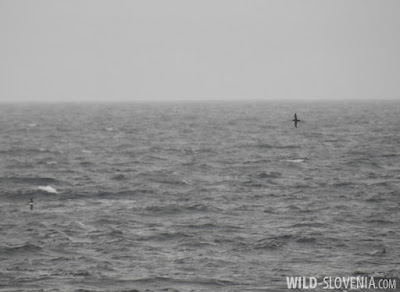 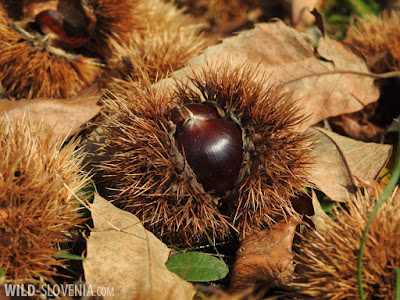 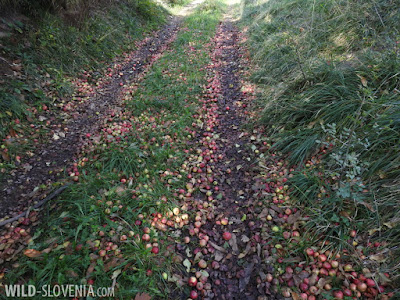 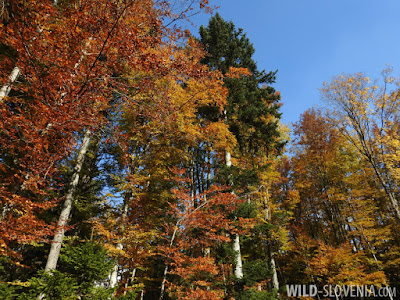 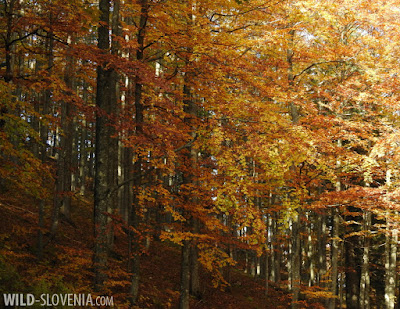 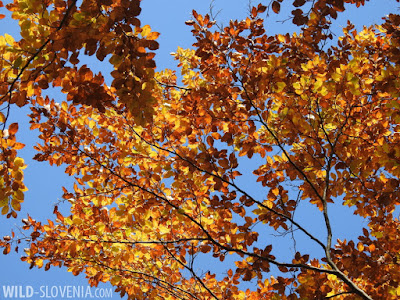 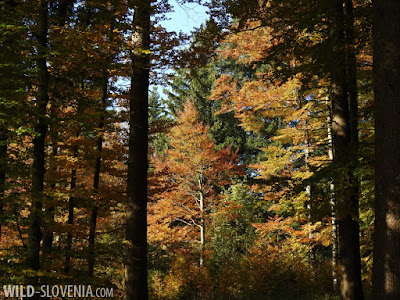 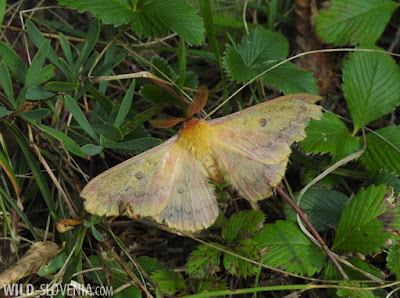 Autumn is in full swing with its magic colours, despite some unusually hot temperatures and prolonged periods of sunny weather. At the moment we're co-leading a trip to Istria in NW Croatia, so not much time to write a proper post. Instead just a couple of recent photos from the Karst region with some of its typical season's representatives. A week or so ago, when we headed to Trnovski gozd (Trnovo forest) to enjoy the autumn colours of the Dinaric forests, we were dragged into the forest by the loud calls of a Nutcracker Nucifraga caryocatactes and observed a Ural Owl Strix uralensis being mobbed by the noisy corvid! An amazing scene you don't witness every day! Hopefully more interesting autumn wildlife to come in the next week... stay tuned. 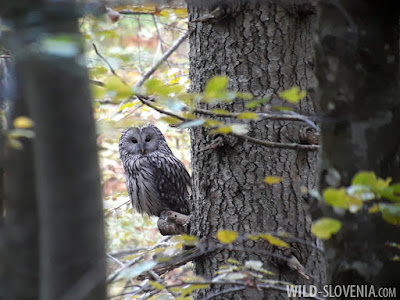 We are back after a long weekend's guiding a group of birders in the forest of Notranjska in southern Slovenia. Our base was in Loška dolina from were explored the forests of Snežnik and Javorniki on a daily basis. We also checked the temporary karstic lake of Cerknica, which was almost completely dry and therefore devoid of birds. On the last day we also visited the coastal wetland of Škocjanski zatok for a few more waterbirds. The group returned home very happy with almost all targets seen.
The tour's focus were forest owls, especially Ural and Pygmy and the rare woodpeckers that become active at this time of the year, before the arrival of winter. We saw Ural Owl Strix uralensis on a daily basis, including a pair and 2 single males, for a total of 4 individuals. One particular bird that gave excellent views was spotted at the side of a forest road, while it was in "hunting mode" and remained in full view for quite a while (last pic below & top of the post). Most importantly, all the owls were seen without disturbing them with the use of playbacks. 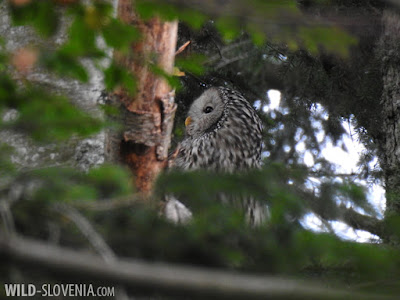 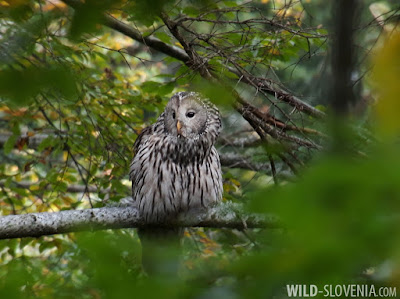 For the participants, perhaps even more exciting, or at least as exciting as the Ural Owls, was a fabulous Pygmy Owl Glaucidium passerinum that we initially heard on the first day and then also managed to see on the last. It was quite hard work though and the group stated that the guide was simply good enough to locate the calling owl and to spot it in the distance. :-)
We watched this diminutive and rare forest owl through our scopes for at least half an hour or so, before it decided to fly off, never to be seen again. A truly magic encounter! 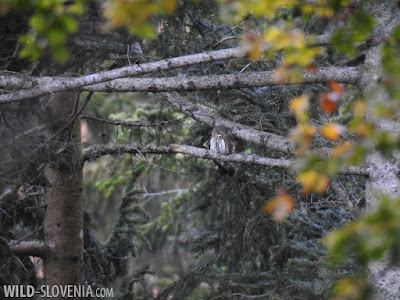 Next were the woodpeckers. While having lunch on a forest glade on the Snežnik plateau we heard the distinctive "chek" of a Three-toed Woodpecker Picoides tridactylus and located a beautiful male, feeding on spruce trees around our pic-nic site. Another Three-toed Woodpecker, this time a female, also distracted us while we were listening to and looking for the Pygmy Owl. We also enjoyed good views of a male Grey-headed Woodpecker Picus canus, heard a Middle Spotted Woodpecker Dendrocopos medius and saw & heard several Black Woodpeckers Dryocopus martius. Even if we checked several sites for White-backed Woodpecker Dendrocopos leucotos, this rare species eluded us this time.

Among other forest birds we enjoyed daily encounters with common species like Crossbill Loxia curvirostra, Bullfinch Pyrrhula pyrrhula, Treecreeper Certhia familiaris, Willow Tit Poecile montanus, as well as large flocks of Chaffinches Fringilla coelebs feasting on fallen beech mast along the forest roads. Within Chaffinch flocks we also spotted the first Bramblings Fringilla montifringilla of the autumn while small flocks of Siskins Carduelis spinus were flying overhead. A single Redwing Turdus iliacus was also an autumn's first. In the sky some large flocks of migrating Woodpigeons Columba palumbus (up to 150-200 birds at a time) were heading south, as were a few residual House Martins Delichon urbicum.
Mammals included a few rutting Red Deer Cervus elaphus stags (heard only) as well as about 5 individuals seen along forest roads. Some dark-morph Red Squirrels Sciurus vulgaris added a bit of atmosphere to the conifer forests. This time we didn't see any Brown Bears Ursus arctos, but their droppings, full of beech mast shells, were literally on every forest road.
In the forests we also enjoyed the beautiful autumn colours of changing leaves, especially those of beech Fagus sylvatica, which are now turning yellow and orange. Despite the rather dry autumn season and the lack of fresh fungi, we nevertheless found two interesting species: "Fir Cauliflower Fungus" Sparassis nemecii and the rare Hericium alpestre, growing on dead conifer wood. 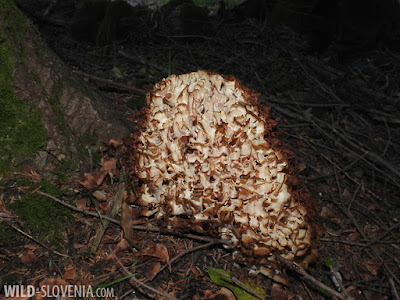 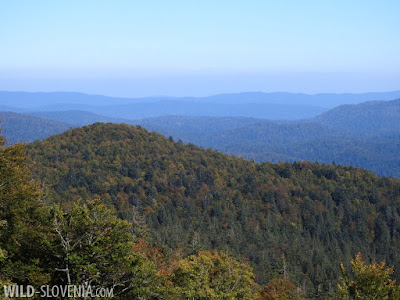 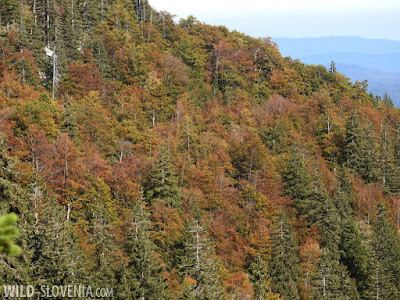 As we already mentioned, the Cerknica lake was almost devoid of birds and the only interesting species we saw were some Great Grey Shrikes Lanius excubitor, a Kingfisher Alcedo atthis and a Water Rail Rallus aquaticus. A stop at the river Unica on Planinsko polje produced a nice pair of Dippers Cinclus cinclus and several Grey Wagtails Motacilla cinerea.
After leaving the Notranjska region on the last day, we moved to the coastal wetland reserve of Škocjanski zatok, were we rounded up the trip with some common waterbirds and two stunning Bluethroats Luscinia svecica hopping on the mud at a reedbed's edge.
At the end of our 4-day trip, the check-list numbered 84 species of birds. Not that many you will say, but during our tours we always try to concentrate on the quality, rather than the number of species! 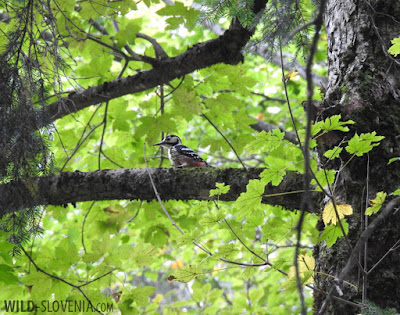 Two days ago we were again on duty in the Snežnik-Javorniki mountains exploring for new locations. Our target species was the White-backed Woodpecker Dendrocopos leucotos, one of Slovenia's rarest breeding birds and thus a rather difficult one to find. Being a heavily-specialised species, living only in old deciduous forests with good amounts of dead wood, it is mostly confined to the mountain forests of the Notranjska and Kočevska region in southern Slovenia. One of the latest population counts estimates between 100 and 150 breeding pairs in the whole of Slovenia. From personal experience we can say that the species is rather different in behaviour from the other woodpeckers, like Great Spotted for example. When it feeds it is usually restless and very mobile, never stopping for more than a minute or so. Moreover its territories are very large and scattered over quite rocky and mountainous forests. Thus, outside of the breeding season, when males drum and can be located more easily, this is a quite difficult bird to track down and observe. On Monday we visited an area where the species is known to be present with low densities (2-3 pairs). We didn't have much hope of success, but soon after our arrival on one of the "lucky spots" signed on our map, we heard the distinctive "chuk" of a White-backed Woodpecker. We followed the sound, but the bird proved to be quite mobile and also invisible, somewhere high up in the (still green) canopies. After one fleeting glimpse and about one hour later, we were finally watching the female White-back as it was, quite surprisingly, looking for food on Norway spruces Picea abies, rather than deciduous trees. In fact, the forest where we found the bird was very poor with dead beech wood, where the species finds its main food source - wood-boring beetle larvae. The female White-back gave good views for a short while and so we managed to take a short video when it descended to feed on a Sycamore Acer pseudoplatanus. 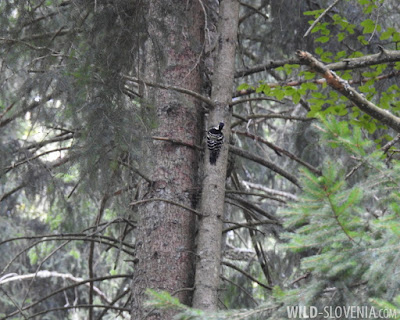 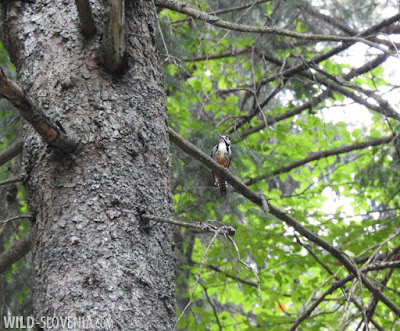 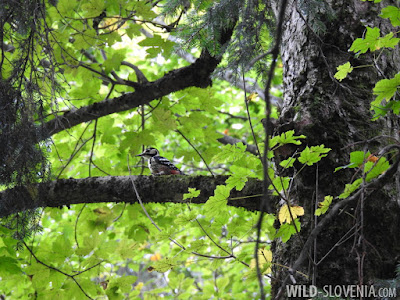 Later in the day, we were quite astonished, when after following a probable Three-toed Woodpecker Picoides tridactylus, tapping on some dead conifers, we stumbled into another White-backed Woodpecker. Once again a female; it was feeding at the base of a dead spruce and later on a spruce stump in a predominantly conifer forest, where you certainly wouldn't expect this species. Our personal thought is that White-backs in Slovenian forests can't find enough dead beech wood and thus they need to move around quite a lot within their large territories and frequently switch from beech to conifers.

The end of September and beginning of October represent the climax of the Red Deer Cervus elaphus rutting season. So the forests were resounding with the rutting of stags: wherever we stopped and listened there was at least one rutting deer. Here's a video we recorded on site. The sound quality is bad, so you need to turn the volume up to maximum to hear the rut. At the beginning and sometimes in the background a pair of Ural Owls Strix uralensis can be heard as well.

As mentioned we also had our daily dose of Ural Owls Strix uralensis as a pair was spontaneously calling to each other along a forest road, where we stopped to hear the Red Deer. We saw both male and female for a few seconds. The one in the photo is a female of the grey morph - having a greyish-barred face disk. More about Ural Owl morphs in this article.
Other wildlife in the forest included 2 Black Woodpeckers Dryocopus martius, a Red Squirrel Sciurus vulgaris, 4 Roe Deer Capreolus capreolus and commoner forest birds like Willow Tit Poecile montanus, Crested Tit Lophophanes cristatus, Crossbill Loxia curvirostra and others. In the sky there were still some House Martins Delichon urbicum making their way south. Being a quite dry and rain-less season there weren't many new mushrooms on the forest floor, but rather old specimens from a week or so.
Posted by Domen & Sara at 03:22