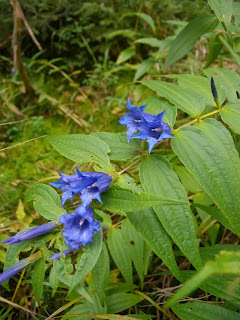 It's all quite dull at the moment, especially bird and weather-wise, so here's a botanical post to liven up the situation. A selection of wildflowers took at the end of September, mostly in Slovenia, on the Karst.
Posted by Domen & Sara at 12:51 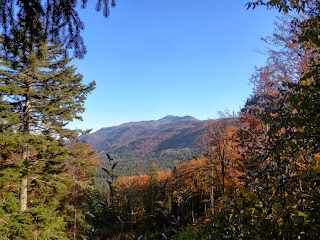 I'm back from three days of university field lessons on the Snežnik plateau and surrounding Dinaric forests (Slovenia). The weather has been absolutely brilliant with sunny conditions and some nice chilly mornings and evening (touched 0 degrees C). We mainly visited forest areas around Mašun and Sviščaki, climbed on the top of mt. Snežnik (1796 m.a.s.) and visited the Krokar primary forest (virgin forest) near Kočevje. The trip was conduced for the subject of ecology, so wasn't strictly birding-related. However I managed to see a couple of interesting species here and there. Highlight were my first REDWINGS for the season - flock of 6 seen on two consecutive days at Mašun. A few times I also heard autumn's first Bramblings and Siskins passing overhead, among the very abundant Chaffinches. Common, but interesting upland forest species included: Crossbill (very common), Bullfinch (feasting on rowan berries), Goldcrest, Coal and Willow Tit, Raven, Mistle Thrush, Hawfinch, Black Woodpecker (2 heard), Crested Tit, Treecreeper (2). Also a single Nutcracker was heard calling. Interesting raptors included a Peregrine and a Goshawk soaring above the steep cliffs of Krokar plateau. On the way back home I also spotted a Great Grey Shrike at Bloško polje (from the bus). All in all a good couple of days. Here's a few landscape pics: 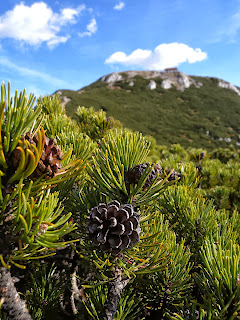 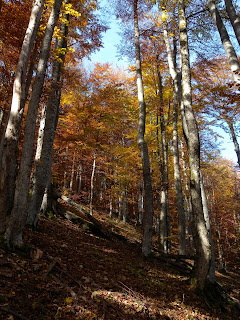 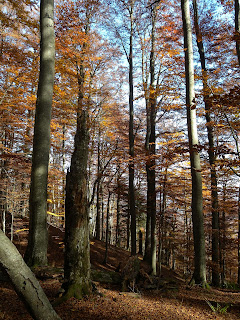 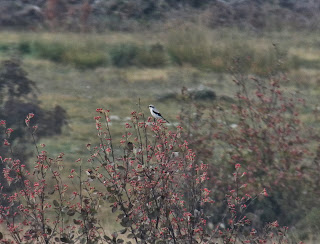 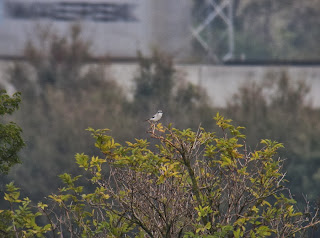 Today I caught up with the first GREAT GREY SHRIKES of the season. Precisely three birds seen in the course of the morning, on the Slovenian Karst between Sežana and Senožeče. I was quite glad to find one in each of the habitats I checked. The above pics are just for documentation as usual with these little beasts and show two different individuals. They tend to be quite wary and "distant".
Low clouds, rain and misty conditions are keeping late-autumn migrants still grounded these days and the Karst was quite alive with passerines. Song Thrushes were everywhere this morning, along with hundreds of Chaffinches, Jays, Robins and Dunnocks. Other birds seen included Yellowhammer (2), Hawfinch, Grey Heron (1 in karstic scenery), Meadow Pipit (small flock), Skylark (10), Woodlark (singing a bit everywhere now), Blackcap (good numbers), Chiffchaff, Raven, Black Redstart, Kestrel and Buzzard.
Yesterday during a short session of unplanned urban birding in Trieste I found a female Common Redstart in a small garden. In the evening I watched about 25 Jackdaws going to roost and reasonably big flocks of Starlings gathering on kaki trees.

Local patch: this morning a flock of 10 Swallows was still present in the area. Also some House Martins still occasionally found here and there. In the last three days good numbers of Water Pipits were migrating along the coast with quite big flocks of Chaffinches and even a flock of +60 Woodpigeons flew over the suburb. Dunnock invasion has begun and now they are fairly common in the gardens.
Posted by Domen & Sara at 11:59