Ural Owl in the Karst 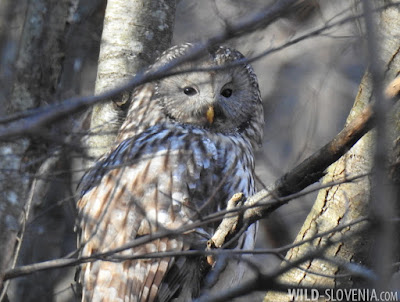 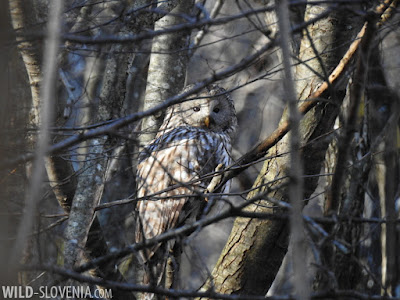 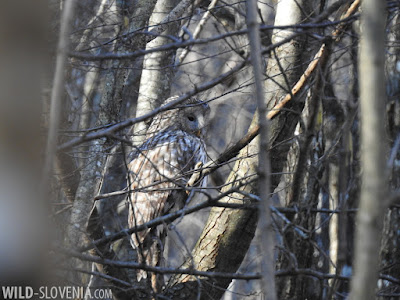 Forest birds are not easy to detect, especially in winter. A considerable amount of effort is usually needed to observe secretive birds and exciting encounters are few. But when these happen, the feelings are so overwhelming that all the efforts are quickly repaid. To us, observations of difficult-to-see forest species are certainly the most satisfactory of all! One such case is when we spot a Ural Owl Strix uralensis. Although not a rare bird in Slovenian forests, is nevertheless not easy to observe. Yesterday's encounter with this owl was even more exciting, because we found it not in a classical Dinaric forest of southern Slovenia (where the species is abundant), but in a Karst's woodland, only some 8 km away from Sežana. We flushed the Ural Owl when we were walking along a forest track, but the vegetation was so thick, it was quite hard to locate the bird when it landed. The owl's colours matched perfectly the grey trunks of the surrounding forest. At the end we managed at least to take the above shots and enjoy the perched bird for a while. It was actively hunting and frequently staring at the ground as it's usual for the species. After about 15 minutes we left the bird in peace when it silently flapped away into some distant trees.
The encounter was certainly unexpected, although a few years ago we already observed 2 Ural Owls, some 3 km further to the east. The species doesn't breed in this part of Slovenia and there are only a handful of winter and autumn records for the Karst. But in recent years Ural Owl has been spreading its range westwards. Apart from increasing cases of overwintering, maybe, in a few year's time, we can even expect the first breeding in this area... 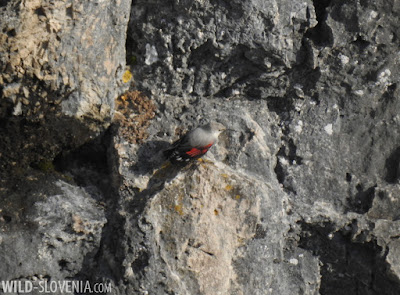 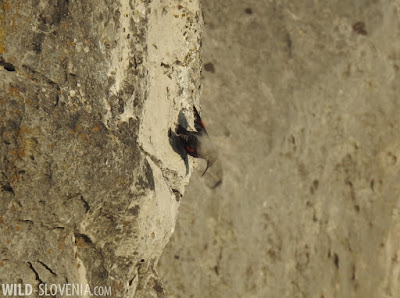 This is the perfect title summarising the birds that we most like to see in winter. Few other birds make the dull and cold winter days more livelier than the above trio. We'll start with the most interesting to foreign birders an locals alike: Wallcreeper Tichodroma muraria. This rare bird lives on inaccessible cliffs in the Alps and its breeding distribution is still poorly known in Slovenia. Needless to say, it's not easy to find one in the Alps in summer. Much easier is to wait for winter and look for it on the south-facing limestone cliffs of the Karst edge (W Slovenia, NE Italy & NW Croatia). In the past week we checked some of the locations close to home and observed 3 different Wallcreepers. Two were chasing each other on the same cliff, while the third was on another location some 5 km away (above pics). The latter showed well for quite a long time and allowed us to make this short VIDEO (watch HD). 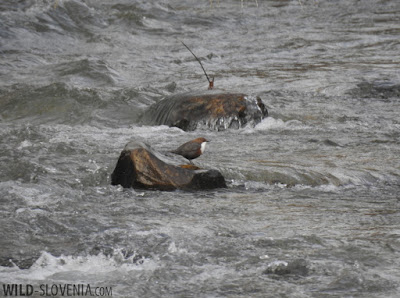 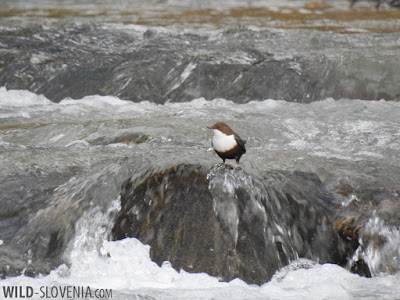 Last weekend we took part in the yearly International Waterbird Census (IWC) and were assigned to two small rivers in the Vipava valley. The rivers are fast-flowing and not very wide, so we didn't see any of the true waterbirds or wildfowl one might expect on such a census. But it was nevertheless exciting, as we counted 12 Dippers Cinclus cinclus. These smart semi-acquatic passerines are common on mountain streams in Slovenia and are frequently the only species recorded by most of the IWC volunteers counting on rivers in the north and west of the country. Some of the Dippers in the Vipava valley were already very territorial and we even observed a pair in courtship. These early breeders are in full spring mode! 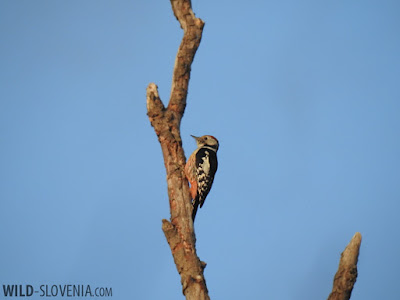 Here we go again with the Middle Spotted Woodpecker Dendrocopos medius. In recent months there has been an expansion (invasion?) from Slovenia into northeast Italy, where previously the species was totally absent. Now even in the Italian Karst, in the outskirts of Trieste, records of Middle Spots are becoming increasingly regular. The above bird was photographed in Italy, only 3 km away from the nearest Slovenian breeding grounds. It's just a matter of time, before the first breeding pair for the whole of northern Italy is found (the species only breeds locally in central and southern Italy).
Shortly after the above Middle Spot was seen, two Lesser Spotted Woodpecker Dendrocopos minor and a Black Woodpecker Dryocopus martius landed on nearby trees and went to roost. Soon the first Blacks will start with nest excavation and the woodpecker season will finally kick in! 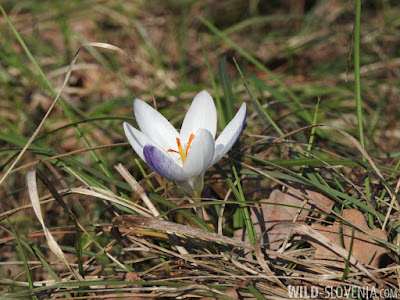 It's mid winter, but the botanist inside us is never at rest! In the warmer parts of the Karst, some vernal plants are making an early appearence. Actually this is the time when the very first spring flowers usually start to appear. Primroses, Helleborus and Crocuses for example are typical late-winter plants. Moreover the weather has been unusually warm recently, with temparatures rising up to 15 degrees C at times and this certainly encouraged the blooms.
Here's a selection of the plants that made us a bit more cheerful during our recent winter excursions. 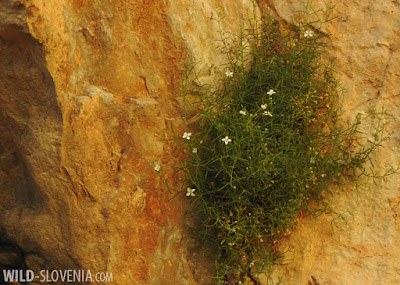 Tommasini's Sandwort Moehringia tommasinii - endemic to SW Slovenia, NW Croatia and extreme NE Italy (see IUCN factsheet). It grows on sunny limestone cliffs that even in winter can support a mild microclimate, encouraging early blooms. The above shot was taken a few days ago in the Osp cliff  - the species' typical locality in Slovenia. 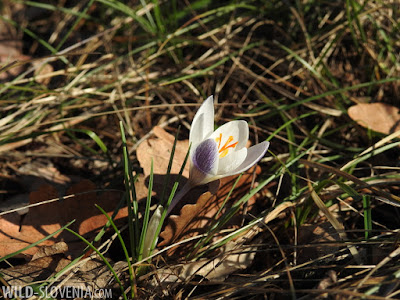 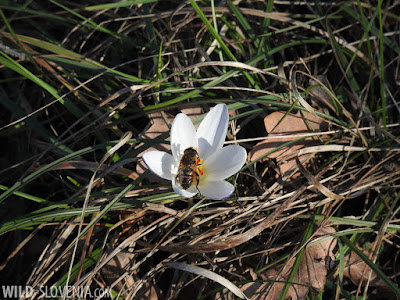 Welden's Crocus Crocus weldenii - a Balkanic species present at a couple of locations in the Trieste Karst, not far from the Slovenian border. There are a few doubtful historic data for Slovenia and the species has not yet been discovered in the country. However, even the small Italian population is of uncertain origins. 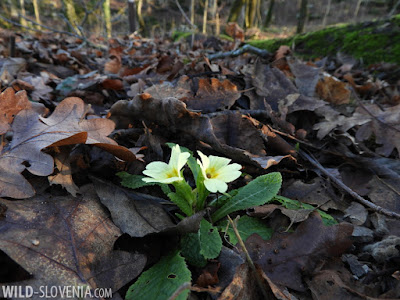 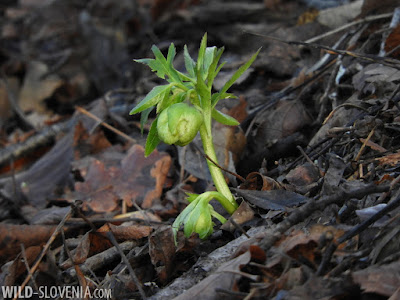 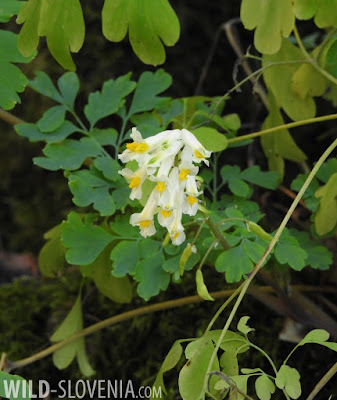 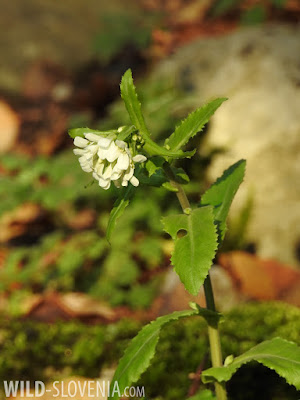 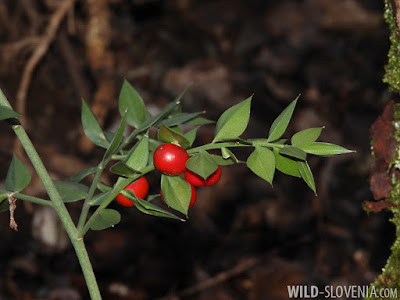 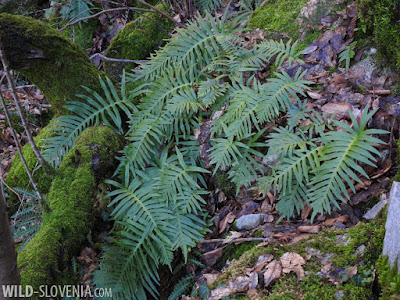 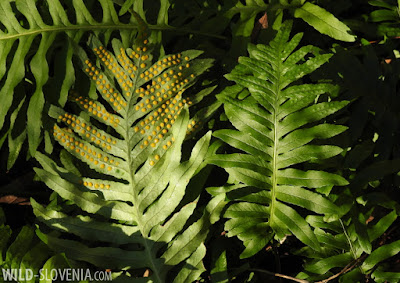 Southern Polypody Polipodium australe (also P. cambricum) - the southern relative of the Common Polypody P. vulgare. It grows on or near limestone cliffs, usually in more shaded places. It is very common at the Osp cliffs. 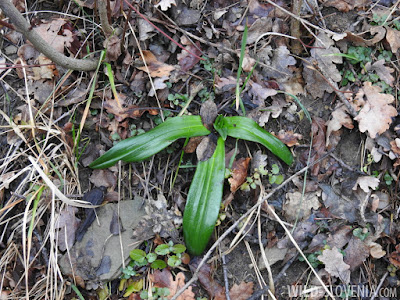 These could possibly be the leaves of a Lady Orchid Orchis purpurea, photographed a few days ago in the flysch hills near Kozina. Certainly a very early record. 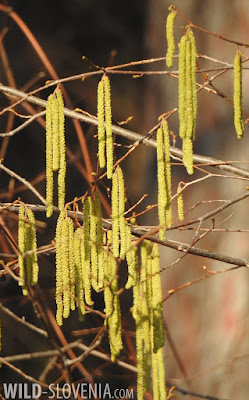 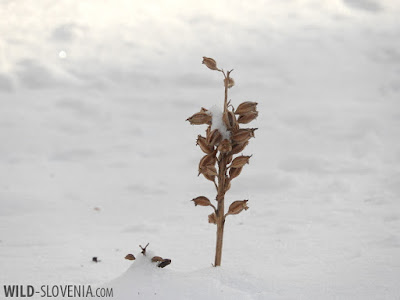