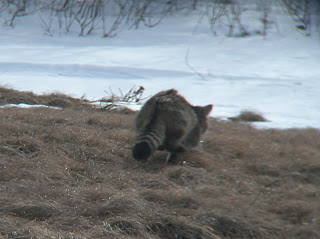 Today I got confirmation from an expert about a doubtful cat that I photographed on Saturday near Dolenja vas (Senožeče - SLO). As I initially supposed it was a WILDCAT (Felis silvestris), roving around the snow-covered fields in the middle of the day! In the above photo you can see the very bushy tail and the clearly divided black rings around the tail (the tip of the tail being completely black). The cat was also quite big and bulky for a domestic cat and ran into cover as soon as I started watching it, after I stopped the car (yes, I spotted it while driving on a country road).
As far as I know, Wildcat is a widespread mammal across Slovenia and the area where I observed it seems quite perfect. But of course is far from easy to see one during the day.
Posted by Domen & Sara at 01:35

Green Woodpecker in the snow 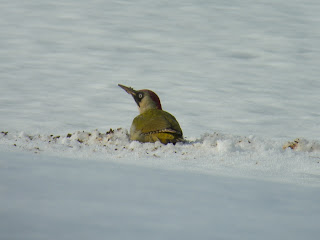 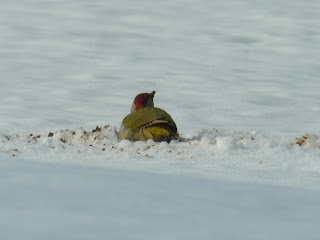 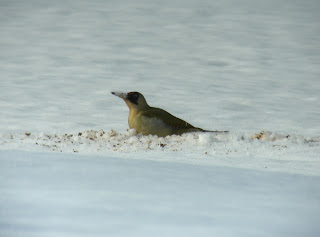 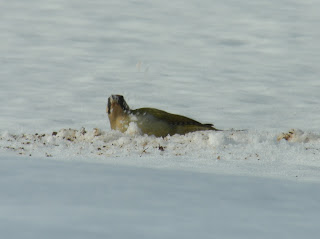 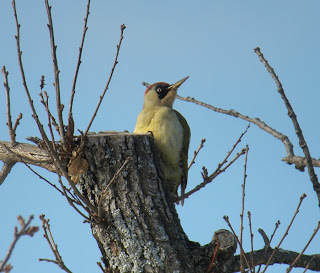 I decided that today was the time for a stroll on the snow-covered Karst plateau. The weather was very nice if we don't take into account the extremely annoying cold wind that made several observations quite difficult.
In the afternoon I found the above female Green Woodpecker digging a hole into the snow, on a field not far from a country road. The bird remained on view for a about 5 minutes, until it flew up on the nearest oak tree, still showing well (here is a video). A common bird set in a nice wintery context.
The increasing wind in the late afternoon put a rough stop to my waiting-for-the-Wallcreeper plan. However I managed to see 3 smart ALPINE ACCENTORS on the cliffs of Mt.Stena (Glinščica valley NR) foraging in the short grass on the steep slope. I located them thanks to their frequent calls. In the area a male Peregrine was sitting on its usual perch and a pair of Ravens was constructing its nest in a crevice in the cliff. Two Rock Buntings and a male Black Redstart were also on the cliff face, but few other birds were around in the wooded areas, apart from the usual tits and a Siskin (heard).
Also the other places I visited during the day (mainly on the Slovene Karst) were quite calm and my search for a potential Rough-legged Buzzard ended with no actual lagopus in the bag. Two Fieldfares and some other commoner countryside birds were nice to see though.
Peregrine in the Glinščica valley/Val Rosandra 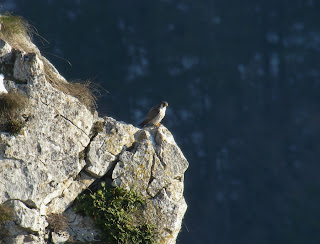 The first Helleborus braving the snow 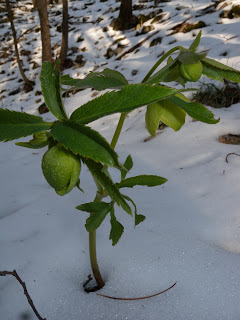 Oh, and here I put a video of the Cirl Bunting I had in the garden the other day. Sorry for the black dot...it must be some kind of dirt on the inner camera lenses.
Posted by Domen & Sara at 12:37 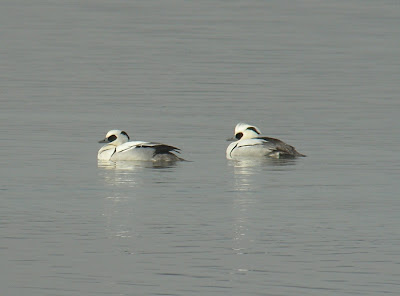 What a fantastic day I had yesterday! Early in the morning I went on a trip in northeastern Slovenia with a couple of friends from DOPPS (Birdlife Slovenia) for some top-quality birding. First of all I must mention my personal highlight of the day: no less than 4 SHORT-EARED OWLS at the Medvedce reservoir! One of my top favourite birds. It was quite an experience because the owls appeared all at once at dusk and began to hunt low over the fields surrounding the reservoir. There was still enough light left to see them quite well - at least with the scope. Up to six birds were seen in the area a few days ago, so there's a kind of wintering population here.
Later we also had a perched LONG-EARED OWL by the roadside, hunting on the ground, right in the car's headlights.
The Medvedce reservoir also held a lot of wildfowl as usual, but mainly the commoner species. The Goosanders were the most interesting, along with a flock of White-fronted Geese in the fields. Three Stock Doves were nearby and a few Hen Harriers were hunting above the fields (+5 later at the roost). A small nearby wooded area produced a calling Black Woodpecker and a flock of 100 Fieldfares was feeding on the edge of a garden.

Earlier in the day we also visited several places around Ptuj and Maribor. The lake of Ptuj held more or less the same species I saw here at the beginning of January (see this post). The female LONG-TAILED DUCK was still present at the dam of Markovci, always associating with the Velvet Scoters. 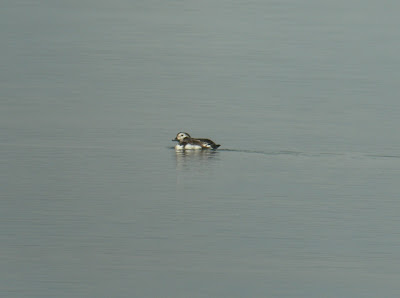 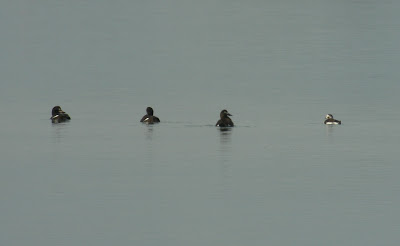 The lake also held a nice total of 17 Smews (pic on top of the post), +7 Velvet Scoters, a lot of Goosanders, 1 male Ferruginous Duck, Goldeneyes, Pochards, Tufted Ducks and commoner species. A mixed flock of TUNDRA BEAN GEESE (118 ind.) and White-fronted Geese (+100 ind.) also landed on the lake. Quite astonishing as I never had such a big flock of Bean Geese! Also some Rooks were seen around Ptuj during the day. 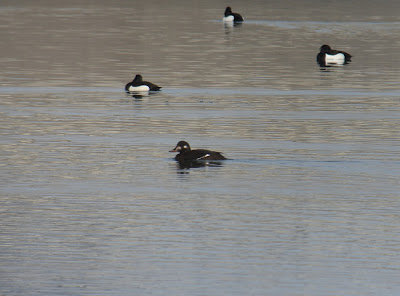 On the surrounding fields the two BEWICK'S SWANS were still present as well (ad + juv), but there was no sign of the Whoopers - apparently gone by mid January. 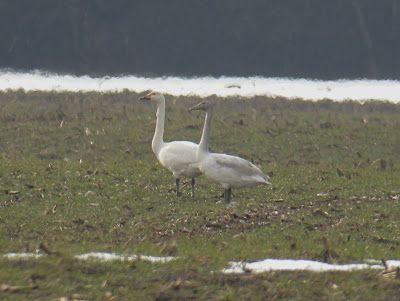 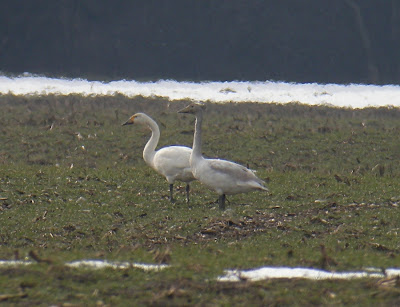 A nice urban Peregrine entertained us on the main bridge over the Drava river, in the town of Ptuj. It also landed several times on a bell tower - see below: 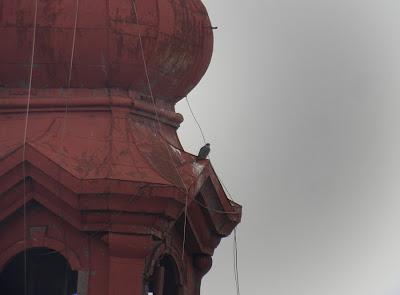 In the afternoon we also checked a popular LONG-EARED OWL roost in a nearby village, which held more than 15 birds, roosting on some pines. Fortunately not all the birds were on the higher branches and some were staring down at us from 8 metres away (see pics). These were actually viewed from a private garden - some friendly owners allowed access to it. In these area we also had two other Black Woodpeckers (1 seen from the car, 1 heard). 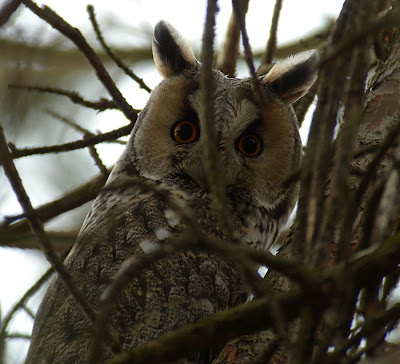 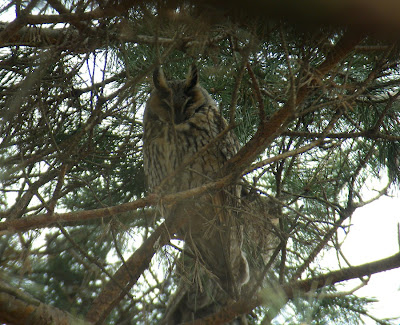 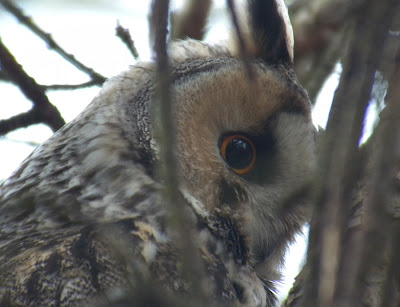 We also added an additional 4 Smews (1m, 3f) at the ponds near Rače (Rački ribniki) which rose our day total to 21 Smews!
All in all a good load of birds for a single day!
Posted by Domen & Sara at 03:28