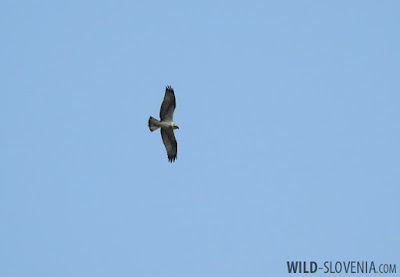 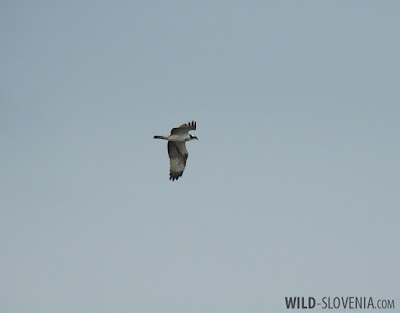 This time a more concise post due to the lack of photos. In the past ten days we made two birding excursions to the Štajerska region in the north-east of Slovenia. On the first occasion we visited the Medvedce reservoir near Pragersko, the lake of Ptuj and the fishponds at Rače, while during the second trip (yesterday) we attended DOPPS's traditional bird race in the area of Ormož. Our team started quite late for the race, so wasn't too competitive (we arrived 6th), but in general, also due to the strong wind, birds were thin on the ground. However we managed to see a few interesting species in the form of two juvenile Little Crakes Porzana parva at the Ormož lagoons and the season's first Great Grey Shrike Lanius excubitor along a farmland road. Even more interesting was a pair of Large Coppers Lycaena dispar (male and female) at the Ormož lagoons - a quite common butterfly in these lowland wetlands, but rather scarce in western Slovenia.
During our previous visit, the most exciting encounter was a pair of Ospreys Pandion haliaetus fishing above the Medvedce reservoir, while supporting cast included Long-eared Owl Asio otus (1 at a traditional roost), Ferruginous Duck Aythya nyroca, Stock Dove Columba oenas (large flock in the fields), Black Tern Chlidonias niger, Night Heron Nycticorax nycticorax (13 at Medvedce), White Stork Ciconia ciconia (on a nest in a local village), Hobby Falco subbuteo, Peregrine Falco peregrinus and a few of the last migrating Swallows Hirundo rustica.
While visiting these areas in northeastern Slovenia we always like to remember the most memorable birding day we've ever had in Slovenia - here's the old post from 2013 describing it - gives an idea about some of the species that can be seen on a good migration day in the Štajerska region.
Posted by Domen & Sara at 04:31 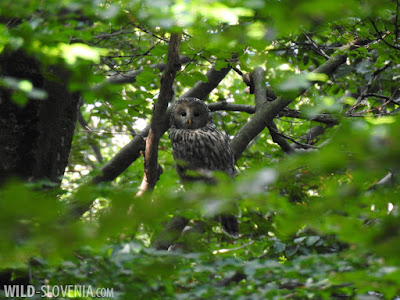 Another post dedicated to forests and probably one of the many similar ones yet to come this autumn! Well, forests are our favourite environment and thus we spend quite a lot of time visiting and exploring them. So far it's been an excellent mushroom season and we have the impression we caught a great amount of species we didn't see in the previous years. We aren't actually mushroom collectors, but rather we like to enjoy them where they grow in their natural habitat, be it a tasty bolete or a deadly agaric! During one such "mushroom visit" to a local forest near our home in the Karst, we came across a great variety of interesting species, some of which are shown in the photos to follow (some still under ID process). 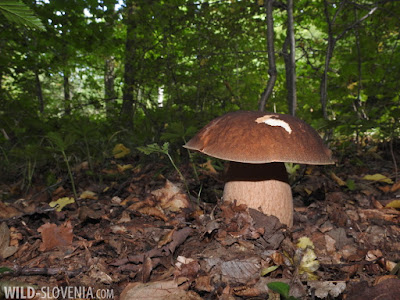 Even more interesting than the fungi on the forest floor was the casual find of a male Ural Owl Strix uralensis - a rare species in this part of Slovenia. We noticed the bird as a noisy flock of songbirds was giving loud alarm calls. Soon we also located the owl and enjoyed it with good views. A few days later we returned to the place to find not 1 but 3 different Ural Owls. We witnessed a singing male being attacked by another male and flushed away, while a female was angrily calling nearby. Probably a dispute on the edge of two territories. Nearby we also enjoyed in the sight and sounds of 1-2 Middle Spotted Woodpeckers Dendrocopos medius - a local pair we know rather well. 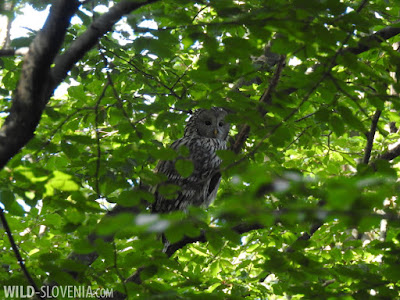 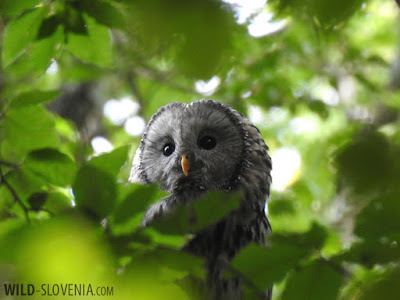 Further afield we spent two days in the Notranjska region, making some exploration and scouting for future projects. We were rather depressed to see that vast parts of the Dinaric forests on the Snežnik plateau are being heavily logged. It is now quite hard to find a decent piece of forest, where you don't hear the chainsaw and where the effects of human activity aren't visible. Fortunately some patches of forest are so inaccessible and difficult to reach that they still remain truly wild. We visited one such example of mixed Dinaric forest set on heavily karstified limestone terrain, full of caves, sinkholes and dolinas that is protected as a forest reserve (logging is not allowed there). As we entered a stand of very old Norway spruces Picea abies we almost immediately heard the distinctive "knocking" of a Three-toed Woodpecker Picoides tridactylus, feeding on a dead spruce. Following the sound we spotted the bird, a female, that gave excellent and close views, as it is usual for the species. 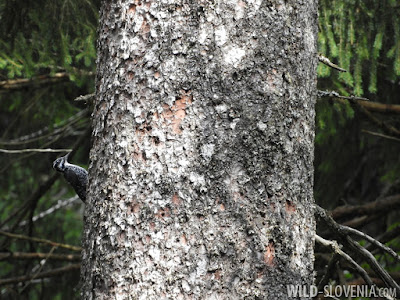 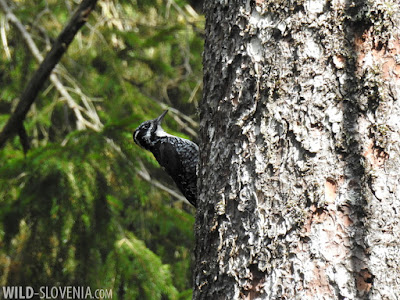 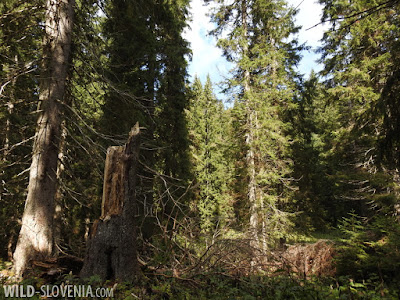 We then continued our way into the forest reserve and enjoyed in the hundreds of fungi sprouting from the forest floor - we are still processing the ID for most of the species in the photos below (we'll add the exact names sometime later). The great amount of dead and decaying wood in this forest and the mixture between conifers and beech trees make for a perfect habitat for specialist birds like Three-toed and White-backed Woodpecker Dendrocopos leucotos - both nesting here. 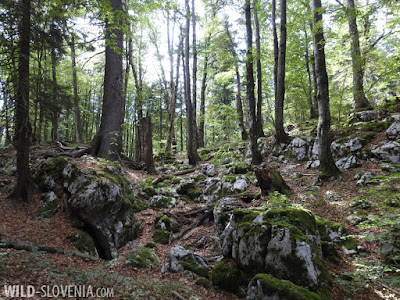 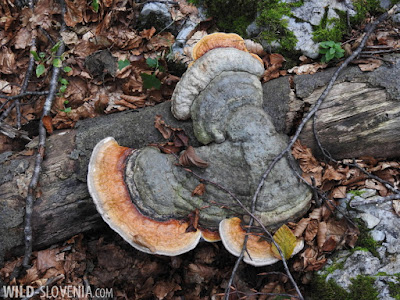 Later in the day we followed again a woodpecker's knocking and re-found the female Three-toed, some distance away from the first spot. A shy Ural Owl Strix uralensis gave a hoot in the late afternoon, but we couldn't locate it. However we were still lucky with this species as we flushed a bird from the side of a forest road, whilst driving. Other interesting birds were in the form of a distant singing Pygmy Owl Glaucidium passerinum, 3-4 Nutcrackers Nucifraga caryocatactes, a Middle Spotted Woodpecker Dendrocopos medius and 3 Black Woodpeckers Dryocopus martius (heard only).

The final surprise and the most heart-stopping one, was when an adult Brown Bear Ursus arctos appeared at the side of the road, while we were driving back from the forest reserve. It was rather quick in fleeing away from us, but as it descended and open forest slope, we could watch it for a few seconds, before it vanished into the vegetation. Amazingly this bear was more or less on the same strecth of road on the northern side of mount Snežnik, where in spring we had two similar encouters!
During a visit to the Veliki Obrh stream in Loška dolina, we were also excited to find some fresh footprints of Otters Lutra lutra that are known to inhabit this area. 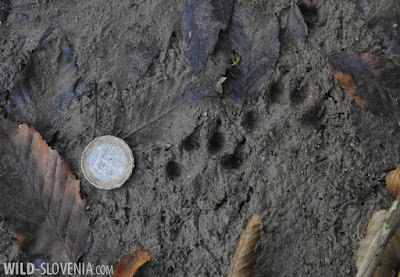 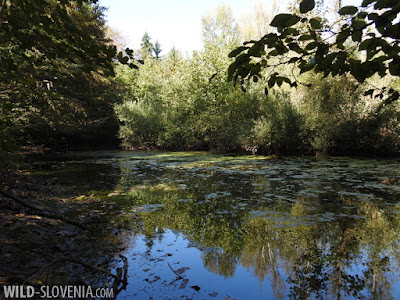 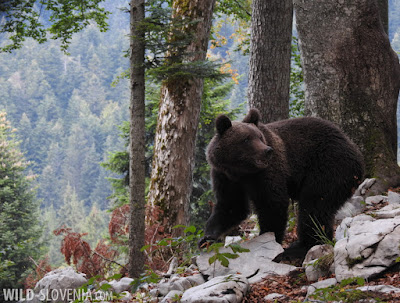 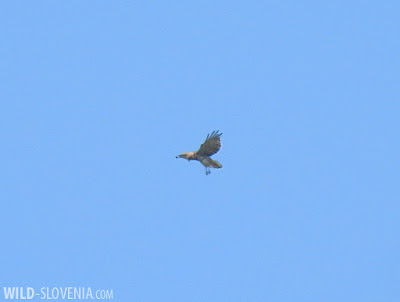 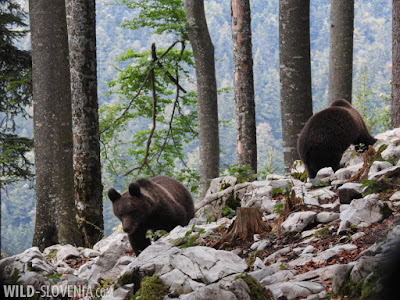 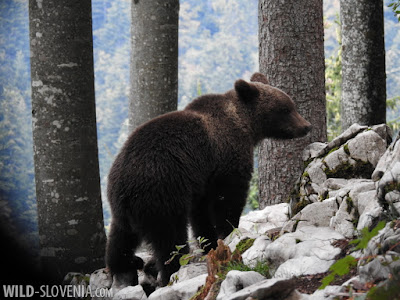 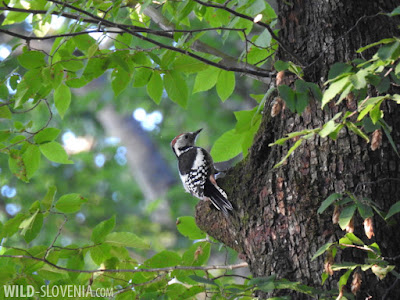 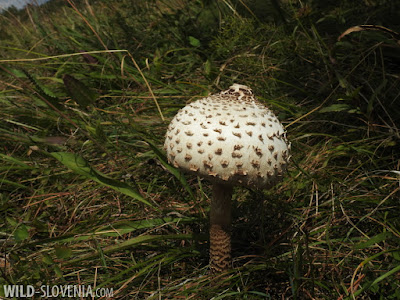 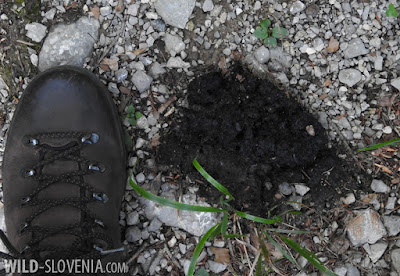