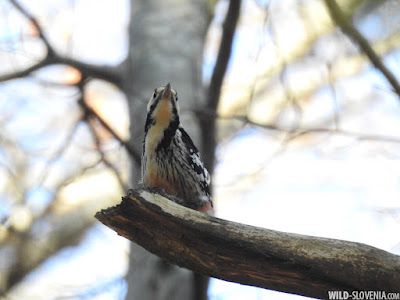 It's woodpecker madness out there in the woods! Most species of picids are extremely territorial at this time of year, so this is also the best time to census them. In the last two weeks we spent most of our early mornings in the forest: either in the Karst's oak woodlands or higher up in the Dinaric beech forests on Snežnik's plateau (all pretty much as usual, we would say). In the forests of Snežnik we surveyed territories of the rare "Lilford's" White-backed Woodpecker Dendrocopos leucotos lilfordi, whose Slovenian population is estimated at only 100-150 breeding pairs. Mid to late March is the best time to locate breeding pairs as these woodpeckers drum quite intensively and it is also much easier to find them now than in other seasons. We were successfull in finding 6 White-backs (3 territories) so far, mostly in commercial forest habitats. The higher terrains (above 1300 m) with old-growth or almost natural forest are still laden with snow and that makes walking quite difficult. We'll need to wait a bit more to survey those areas in late April. Mount Snežnik translates as "the snowy mountain" for a good reason! 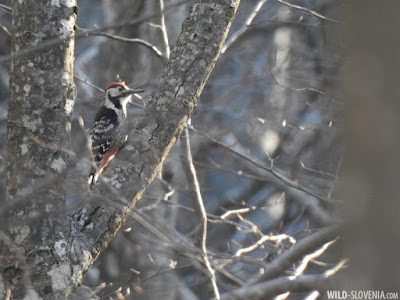 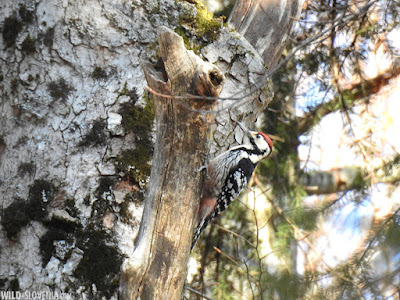 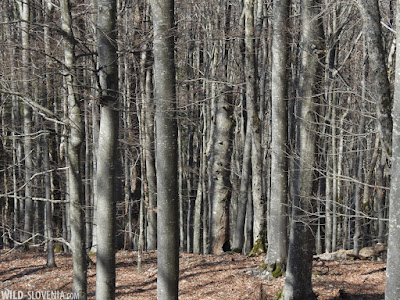 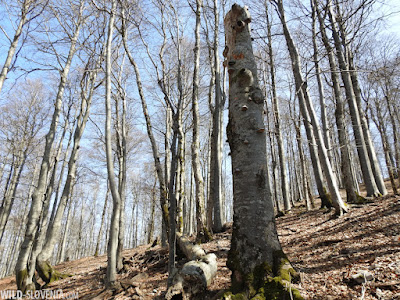 While tracking a female White-backed Woodpecker on a steep slope, we were distracted by a rather characteristic knocking on a tree, coming from another direction. In the predominat beech forest we immediately spotted a decaying silver fir Abies alba, whose pieces of bark were magically falling off at regular intervals. As expected, on the other side of the tree was hiding a stunning male Three-toed Woodpecker Picoides tridactylus, which was removing pieces of bark and feeding intensively. It allowed good and close views, before being chased off by the White-backed Woodpecker that was still around. Although the two species have different habitat requirements (White-back = beech specialist & Three-toed = conifer specialist), they can be sometimes found sharing the same habitat, where dead wood of both coniferous and deciduous trees is found. In the Dinaric forests this is usually the case with natural, higher-altitude beech forests containing also dead or dying silver firs. Other commoner birds encountered on a regular basis in these forests were Grey-headed Picus canus, Black Dryocopus martius and Great Spotted Woodpecker Dendrocopos major, Eurasian Treecreeper Certhia familiaris, Willow Poecile montanus, Crested Lophophanes cristatus and sometimes Marsh Tit Poecile palustris, Crossbill Loxia curvirostra, Goldcrest Regulus regulus and several others. 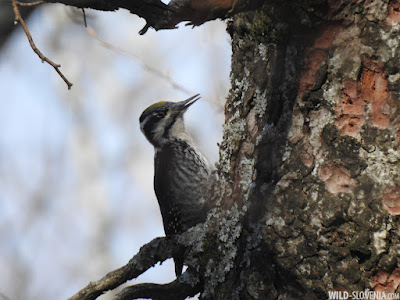 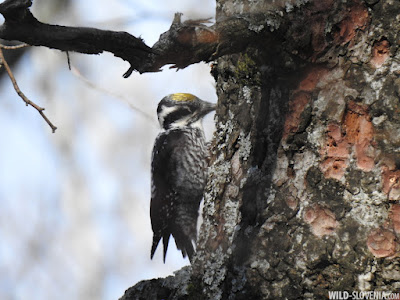 Meanwhile, lower down in the "classical" Karst, we have been censusing another forest specialist for the purposes of our ongoing study - the Middle Spotted Woodpecker Leiopicus medius. In our study area (roughly 10 km2) of mature oak woodland we counted 13-14 territories - a relatively good density considering the rarity of the species, until a decade ago. On every census point we also recorded a nice variety of other picids, confirming that these woods offer some excellent habitat to primary and secondary cavity nesters. Grey-headed Picus canus & Great Spotted Woodpeckers Dendrocopos major were particularly common, while slightly less common was the presence of Lesser Spotted Dryobates minor, Green Picus viridis and Black Woodpeckers Dryocopus martius. The mature oak-beech woodlands are now alive also with the songs of common songbirds, including Song Thrushes Turdus philomelos, now present back en masse. Among the other species it's always interesting to note the simultaneous presence of both Short-toed Certhia brachydactyla and Eurasian Treecreeper Certhia familiaris, the latter being scarcer and preferring cooler beech stands. Also nice was a brief encounter with one of our local Ural Owls Strix uralensis, hunting along a forest road. Despite the great drought (the last weak rain was sometime in early February), the woodland nemoral flora is emerging at last. Especially nice to see are carpets of Dog's-tooth Violet Erythronium dens-canis & Hacquetia Hacquetia epipactis in densities difficult to find elsewhere in Slovenia. 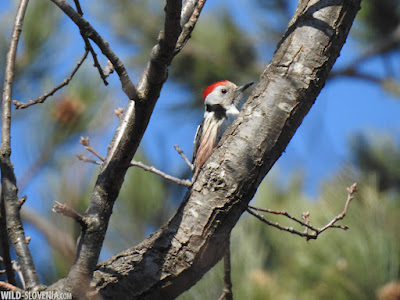 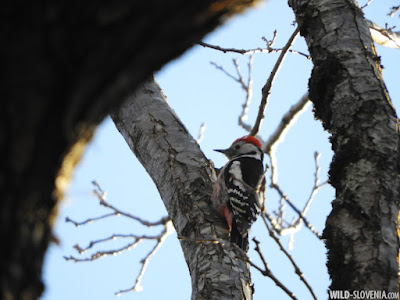 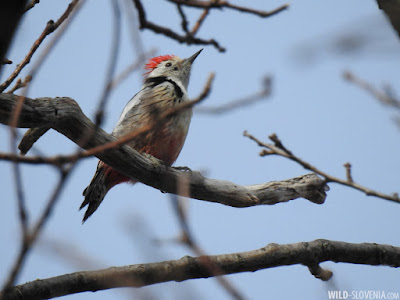 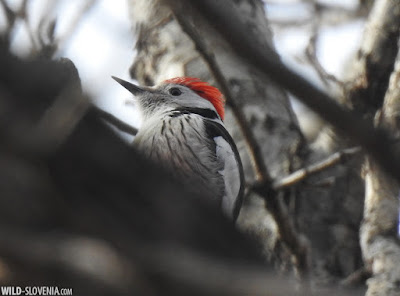 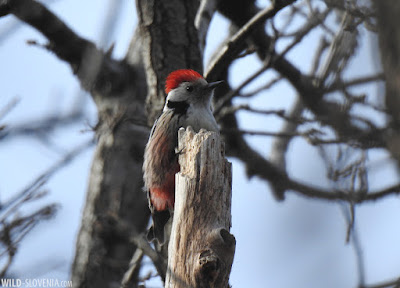 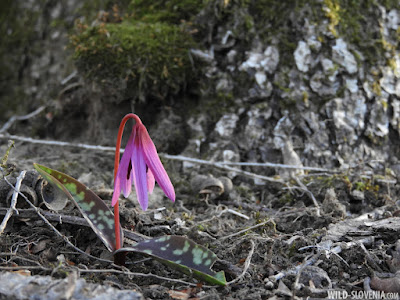 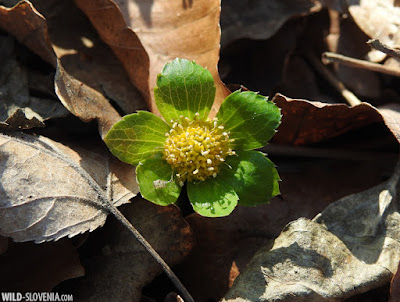 In March we also made short visits to the wider area of Škocjanske jame (Škocjan caves) and the river Reka. Due to the persistent drought, the water levels of the river were worryingly low. We wanted to check on the breeding progress of Dippers Cinclus cinclus (1-2 pairs along this stretch of river) but the birds were nowhere to be found in their usual territories. They probably moved upstream where water levels might be a little more suitable. However we were amazed to find a pair of migrant Green Sandpipers Tringa ochropus on the river instead, while the local Grey Wagtails Motacilla cinerea were also around in good numbers. One evening, as we were listening for a local pair of Eagle Owls Bubo bubo we also heard several Night Herons Nycticorax nycticorax migrating above the river. The rich, deep soil in the Reka river valley also offers excellent conditions for a varied nemoral flora that was in full bloom at the time of our visits. 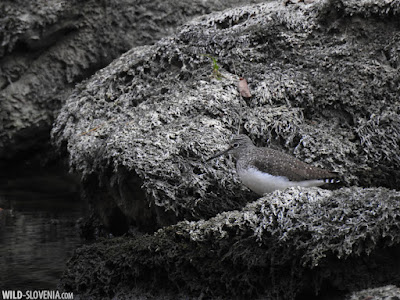 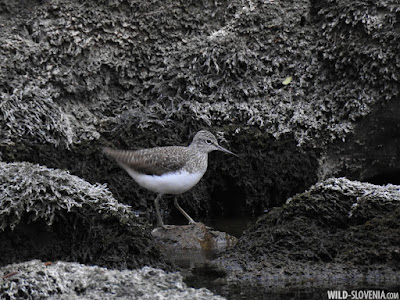 Last week, in between work commitments, we also made a brief visit to the alluvial forests and wet meadows just south of Ljubljana (the area known as Ljubljansko barje). Woodpeckers were again the main protagonists, but this time in a completely different environment from what we're usually used to. Black Woodpecker Dryocopus martius (video) and Grey-headed Woodpecker Picus canus showed really well, while there were also two "mewing" Middle Spotted Woodpeckers Leiopicus medius around. Also here the species is a relatively recent coloniser and can be now observed even in larger parks in the capital. Although we were a bit early for this (actually only one or two days!), we nevertheless enjoyed the spring flora, including carpets of Spring Snowflake Leucojum vernum and the rare Snake's-head Fritillary Fritillaria meleagris, a plant growing on wet meadows and alluvial forests at only a few localities in the whole of Slovenia.
In the free time we've been also checking our other local rare birds, including the occupied territories of our Eagle Owls Bubo bubo as well as one of the only two nesting Black Storks Ciconia nigra in western Slovenia. On the 20th of March we were very glad to spot the returning pair of storks, soaring above their territory. Five days later we were also watching our local pair of Short-toed Eagles Circaetus gallicus that has probably just returned from Africa. One afternoon, during a short session of raptor watching we also observed a Red Kite Milvus milvus migrating near Sežana (annual rarity in Slovenia), as well as one of the local Goshawks Accipiter gentilis. Now we're just waiting for the big boom of summer migrants returning in the next weeks! 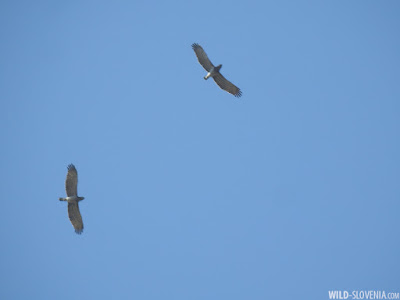 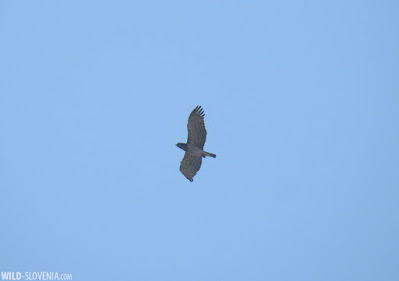