Two days in the Julian Alps 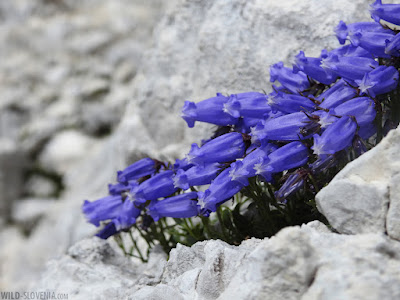 The show of blooming flowers on dry and wet meadows, as well as in the forests is already over. This year's prolonged drought has contributed to an anticipated and very short blooming season for most of the plants. The Karst was already very dry at the beginning of June and it already looked like it was summer. It was similar also on dry meadows in the mountains. However in mid summer there are still some places where one can enjoy a profusion of spectacular wildflowers. In the rocky world high above the tree line, the end of July and beginning of August is the perfect time to catch up with the most iconic alpine flowers. At the beginning of this week we fancied some high-altitude wildlife, so we took a 2-day trip to the Julian Alps in NW Slovenia. As the hiking season is at its highest and all the mountain huts are overbooked, we decided for a shorter version. On the first day we visited the Kanin plateau above Bovec, at an altitude of around 2300 m a.s.l., enjoying in the vast limestone pavements of this heavily-karstified massif. There we found the typical high-altitude flowers of the Slovenian Alps, including Zois' (Crimped) Bellflower Campanula zoysii (endemic to the SE Limestone Alps & mostly restricted to Slovenia), Pink Cinquefoil Potentilla nitida and the two subspecies of Alpine Poppies - Rheatian Poppy Papaver alpinum subsp. rhaeticum and the endemic Ernest Mayer's Poppy Papaver alpinum subsp. ernesti-mayeri. 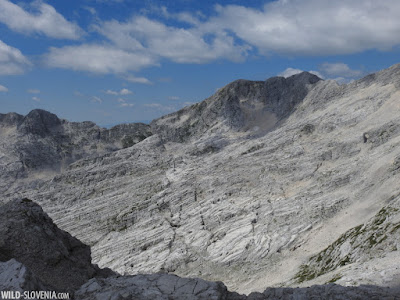 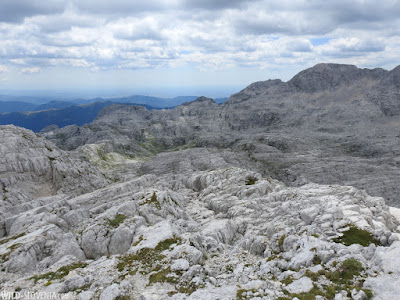 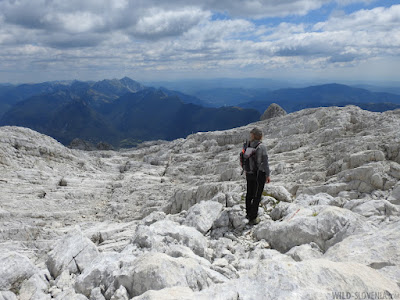 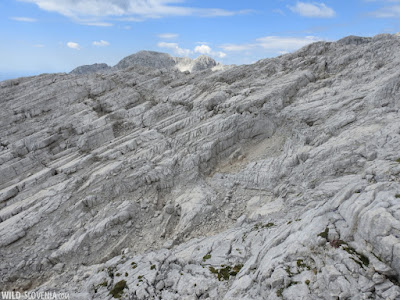 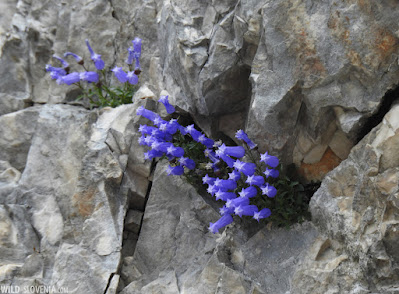 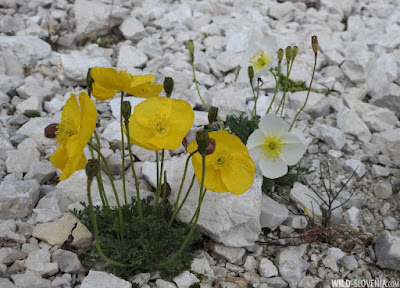 Flowers were easy to find and admire, while animals were not so cooperative, mostly because of the inappropriate time of our visit and the paths being crowded with hikers. But taking some less trodden paths we soon found some typical alpine birds like several Alpine Accentors Prunella collaris, Water Pipits Anthus spinoletta and Alpine Choughs Pyrrhocorax graculus. Scanning the vast limestone pavements we found a nice group of Alpine Ibex Capra ibex, resting in the quieter part of the plateau. It was a bachelor group and some were clearly adult males with long, scimitar-like horns. Close to the tree line we also saw some Marmots Marmota marmota, while on a mountain slope we found some droppings and feathers of Ptarmigan Lagopus muta (they must've been nearby). 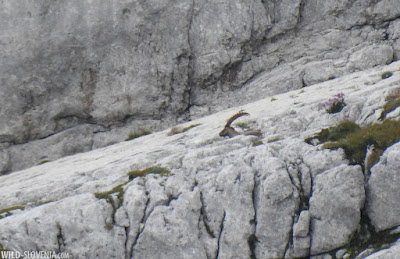 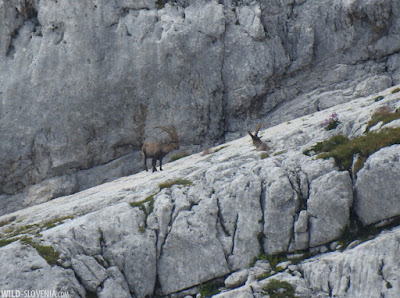 In the evening we decided to avoid the overcrowded mountain huts, so we descended to a lower mountain, Breginjski Stol (1673 m a.s.l.) above Kobarid. There's a very cosy little hut/bivouac on the mountain's saddle, however it is infested with Edible Dormice Glis glis. Anyone familiar with these very common rodents in European broadleaved forests, knows how noisy there are at night. They move around, looking for food, making all the weirdest squeaking and sneezing noises. Therefore we decided to sleep outside. The night was quite wet, we set up a tent. As we are used to beautiful dawn choruses at this site (including singing Rock Partridges Alectoris graeca), we were a bit sad not to hear a single bird singing - it is August after all! However August is already migration time, so it was still cool to hear Night Herons Nycticorax nycticorax and Common Sandpiper Actitis hypoleucos migrating overhead, as well as a Nightjar Caprimulgus europaeus flying low above our tent. The night was nevertheless very noisy due to our neighbours, the dormice. The next morning we found their feeding signs everywhere on the ground, beneath some huge beech trees - the rodents spent the night feasting on their favourite food, fresh beech nuts.
In the morning we set for the top of Breginjski Stol, which is around 2 hours walk from the mountain hut. The morning was rather hot, so among the smaller birds we only saw Rock Buntings Emberiza cia (a common species here), Red-backed Shrikes Lanius collurio and Yellowhammer Emberiza citrinella. However the site is among the best birdwatching locations in Slovenia and should be visited earlier in the season, from late May to mid June. Birds nesting in the steep mountain meadows here include Rock Partridge Alectoris graeca, Rock Thrush Monticola saxatilis, Corncrake Crex crex, Quail Coturnix coturnix, Skylark Alauda arvensis, Whinchat Saxicola rubetra, Stonechat Saxicola torquatus, Tree Pipit Anthus trivialis and several others, while the plant and butterfly diversity is also amazing (see this old blog).
As the temperatures rose, raptors were in the sky and we were soon on the top of Stol. First we saw a family of (probably local) Peregrines Falco peregrinus, followed by Kestrel Falco tinnunculus and Buzzard Buteo buteo. Then it was the turn of Griffon Vultures Gyps fulvus, migrating along the ridges of the Julian Prealps in a NW to SE direction. These birds make daily movements between the Julian Alps of NW Slovenia and NE Italy (Cornino lake NR) and the Croatian islands of Kvarner, passing through western Slovenia. In a couple of hours of distracted raptor watching we counted at least 19 Griffons gliding southeast, one after the other. Later we were also greeted by an immature Golden Eagle Aquila chrysaetos, so the raptor show was complete. Breginjski Stol is an excellent place for watching raptors, especially during migration and is also the only bottleneck site in Slovenia (check this paper). 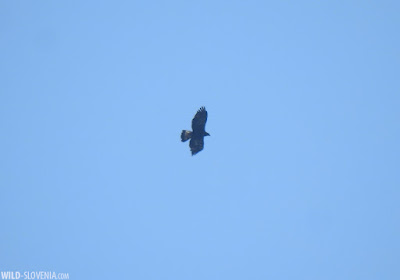 The icing on the cake came when we were descending from Beginjski Stol on its northern slopes and were driving through the beech forests. We noticed a pile of recently logged beech trees at the side of the road, so a stop to check for rare beetles was compulsory. And for the third time this year we were rewarded with an Alpine Longhorn Beetle Rosalia alpina, one of our favourite animals. Although such beech logs act as ecological traps for the species, they remain the easiest places where to look for this rare beetle. Beech forests on steep slopes in the upper Soča valley are also among the strongholds of Rosalia alpina in Slovenia.
After descending from mount Stol, it was so hot that we jumped in the river Nadiža for some refreshment. As we had a mask with us, we did some improvised snorkeling - it was amazing! We saw several species of fish including Italian Chub Squalius squalus, Italian Barbel Barbus plebejus and Vairone Telestes muticellus - all fishes of the Adriatic sea basin that in Slovenia are only found in the west of the country. 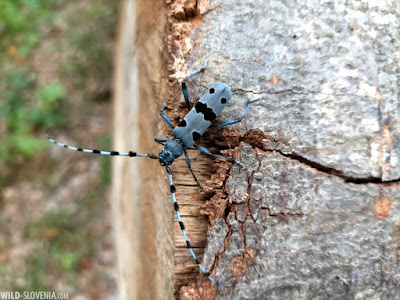 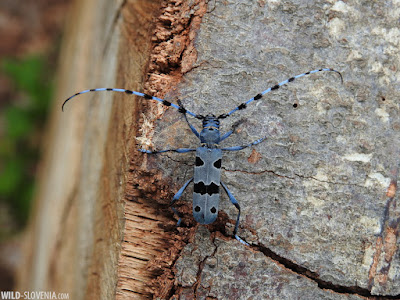