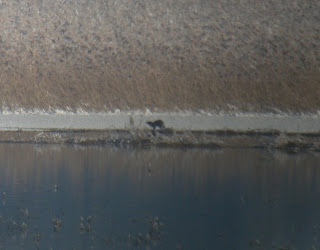 Today I had a stop at the Cerknica lake (in Slovenia) on my way back home from "official business" in Ljubljana. It proved to be a very wise idea.
It was a wonderful day for being outdoors with about -10° to -1° C (coldish), but with a bright sun shining all over the snowy countryside. There must have been about 1 metre of snow on the ground. So I had a nice walk into the snow up to the knees (and sometimes even deeper). The walk brought me to my usual "watchpoint" above the lake, where I had a good view over the main unfrozen water bodies. As soon as I began scanning, a huge perched silhouette appeared on a short pole - an adult WHITE-TAILED EAGLE. It was perched near the biggest water body which contained a thousand or more Mallards, +20 Teals, 9 female Tufted Ducks, a few Coots and some Mute Swans. It stayed there for a long time and sometimes changed perches - also seen on the other side of the lake in the afternoon: 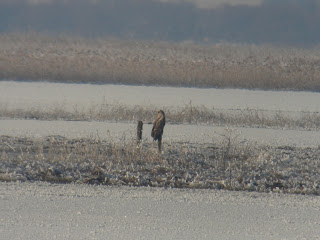 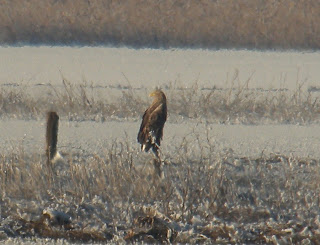 Minutes after the eagle discovery, I was about to have a heart attack when a Coypu-shaped animal appeared in my scope. Coypus are of course (and unfortunately) common around freshwater places, but here one would appear a bit out of place. And after the first look I realized this was no Coypu... it was an OTTER! The animal was quite distant (maybe 1 km away), somewhere right at the centre of the lake. It was showing well, completely out of water, while feeding on the ice. I could watch it for 6 minutes and see all the main features, including the strong, smooth tail, elongated head profile and smooth fur (see pics). Sometimes it moved around a bit and showed even better. Then, after finishing its meal, it dived into the water, never to be seen again. 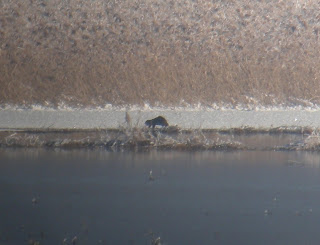 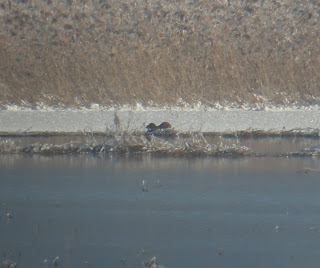 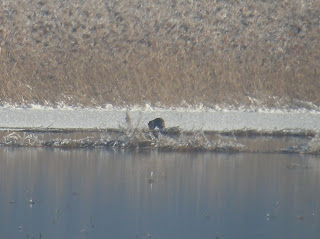 What an animal! In Slovenia, Otters inhabit places like the Cerknica lake, but they are far from numerous, quite localised, extremely shy and hard to see - especially by day. I still think about the Otter as a "ghost animal"... a bit like the Lynx. I think I had a considerable amount of luck today and maybe the icy conditions influenced the animal's activity.

The third highlight of the day followed shortly afterwards when I heard the characteristic call of COMMON CRANES. I looked up and saw a flock of 17 birds flying SW, high over the lake. The firsts of the season, lovely!
Otherwise it was a bit quiet, with not even a single Great Grey Shrike seen (usually present in the area). The only other thing of interest were some mid-sized flocks of Fieldfares hopping on the ice edges all around the water bodies. Also quite funny to hear two Water Rails responding to a dog's barking.
And here some magnificent landscape views to round up the day 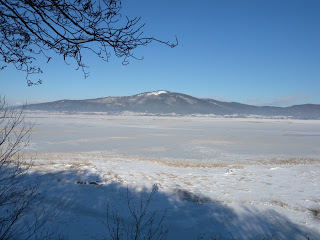 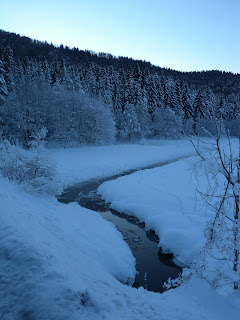 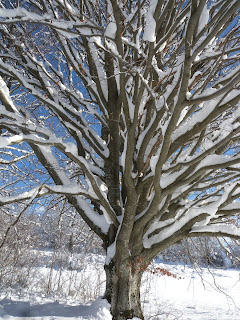 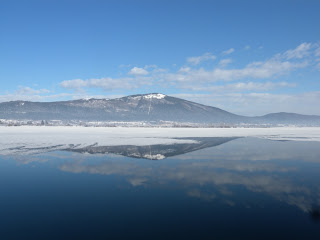 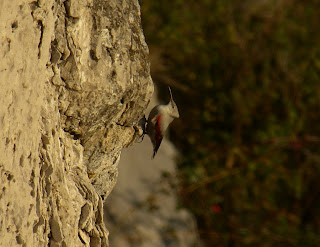 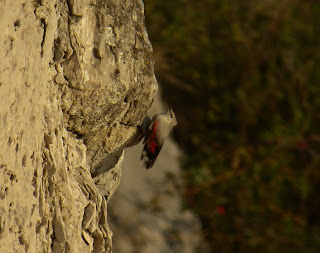 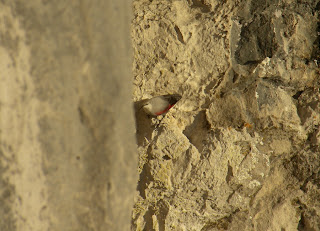 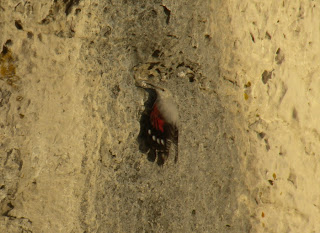 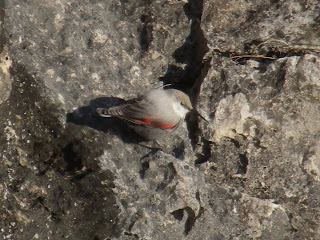 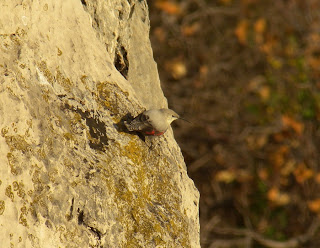 This afternoon I found two cliff specialities that are typical winter visitors along the karstic ridge, but never guaranteed. In the warm afternoon sunshine I decided to check the cliffs of mount Stena which overlooks the Glinščica valley (Val Rosandra), just minutes out of Trieste.
After the usual wait of about half an hour on my preferred clifftop, the first glimpse of crimson flashing on the distant rocks: a WALLCREEPER. At first it was quite far, but in a few minutes it flew closer and gave brilliant views for the rest of the afternoon (see above). A video here. While watching it, hopping up and down the rocks, I noticed another movement a few metres away from it. I was a small Dunnock-like bird that in my bins appeared magically as an ALPINE ACCENTOR. So I could watch both birds at close distance from one another, feeding in the same area of the cliffs. The accentor also ventured into some vegetation and looked for food among the grassy tufts growing out of the rocks. It was also quite vocal and a few times it seemed there were more birds calling, but it was quite difficult to judge the direction of the sound. When you hear a lone Alpine Accentor you always expect to see a whole flock of birds. Instead there's only one calling (a bit like the Jackdaw's call).
Alpine Accentor 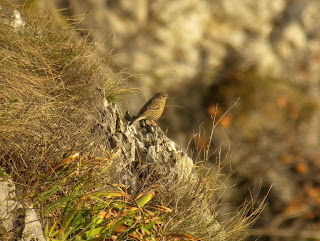 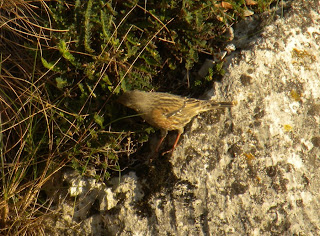 Some distance away from the two birds there was also a female Black Redstart on the cliffs, along with a calling Rock Bunting. Otherwise the area was very quiet, as usual in winter. Just two Ravens passing by and a few tits and Goldcrests in the pines.

Earlier in the morning I had my weekly count at Škocjanski zatok, but there wasn't anything really of note. Maybe 2 Black-throated Divers in the lagoon and 4 migrant Lapwings were the highlight. The Great Grey Shrike by the road was also still present.
Posted by Domen & Sara at 09:43