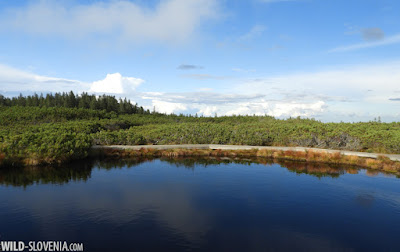 This week we ventured further east from our usual circuits and spent two days on the Pohorje plateau in northeastern Slovenia. The area is the largest non-limestone plateau in the country and its highest peaks rise to an altitude of about 1500 metres. Given its acidic soil composition, Pohorje is covered by extensive conifer forests, interspersed with raised bogs and smaller lakes. The typical boreal appearance strongly reminds of the taiga forests. Many of the animals that live here are ice age relicts, for example Capercaillie Tetrao urogallus, Black Grouse Lyrurus tetrix, Three-toed Woodpecker Picoides tridactylus, Tengmalm's Aegolius funereus & Pygmy Owl Glaucidium passerinum, Mountain Hare Lepus timidus, while among plants there are boreal species like Norway Spruce Picea abies, the various "berries" Vaccinium sp., Sphagnum mosses, Hare's-tail Cottongrass Eriophorum vaginatum and many others.

We visited various forest reserves and bogs, including areas with impressively high amounts of dead and decaying trees. It was a paradise for conifer specialists such as Three-toed Woodpecker Picoides tridactylus... in fact, while taking a stroll in an area of almost-primeval forest, we came across two confiding males. Although the light was really bad, both woodpeckers gave amazingly good views and we could observe them at really close quarters. Actually we were standing right underneath the trees where they were feeding and could even listen to the vibrations on the trees, produced by the insistent pecking. One of the males also gave several spontaneous bursts of drumming - a rather rare behaviour outside of spring. 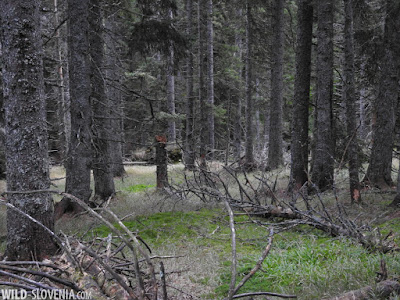 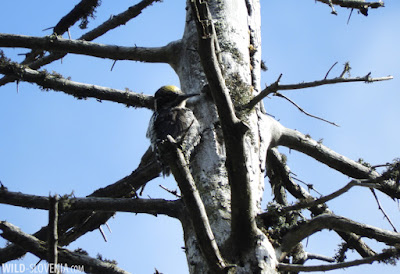 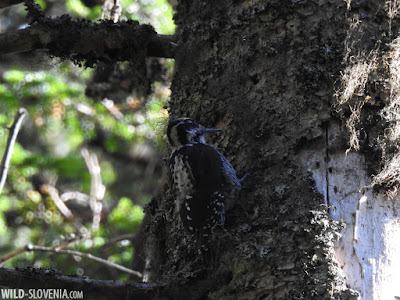 Other birds were typical species of mountain conifer forests and actually we didn't see much else. However we found several interesting plants we are not used to see in the limestone mountains of western Slovenia. There were also several interesting fungi like the rare Coral Tooth Fungus Hericium alpestre, growing on dead Silver Firs Abies alba. Apart from visiting the conifer forests & bogs around Lovrenška jezera (Lovrenc's lakes) and Črno jezero (the Black lake), we also descended to the plateau's northeastern slopes to see the impressive Šumik waterfall in the Lobnica gorge. What an amazing place! The whole plateau is certainly worth another visit in spring (for birds) and summer (for plants). 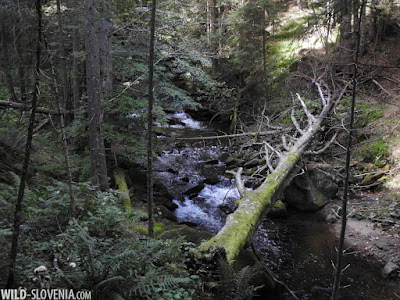 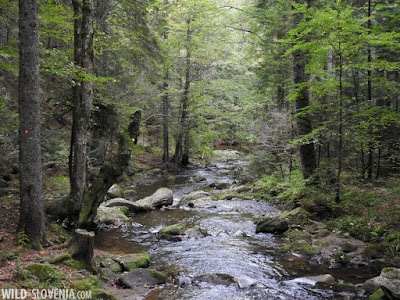 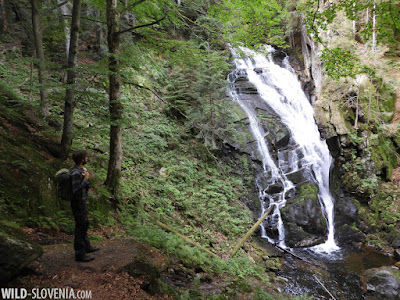 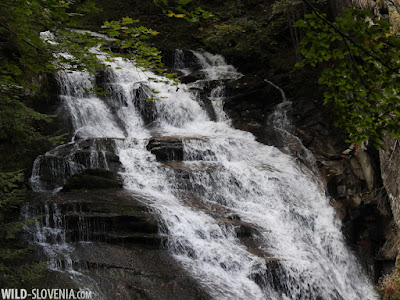 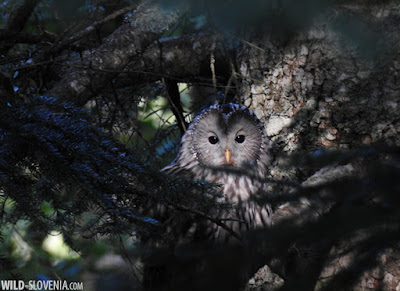 Another weekend in the Notranjska region, this time taking a friend around on a classical autumn trip of lake Cerknica and the Javorniki mountains. The main protagonist of the day was a showy Ural Owl Strix uralensis that we found in the mixed mountain forests of the Javorniki. We had excellent scope views for a good half an hour, whilst the owl was resting on a fir, looking completely calm and relaxed, although it had clearly seen us. It was one of those long-lasting and satisfying encounters when you can really appreciate all the details in the plumage of this beautiful and charismatic bird. Ural Owl is a widespread bird in the forests of Slovenia and high population densities are reached in the Dinaric mountains in the southern part of the country. However, even if the species is partly diurnal, finding one is far from easy. Fortunately we have a good feel for it... 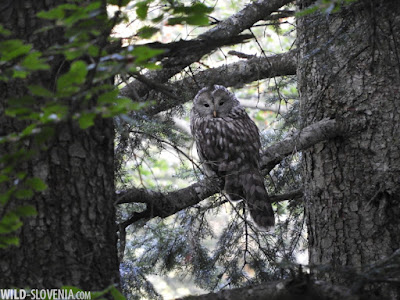 A short video "behind the scenes", taking you into the field with us (view also here).

Although the plan was to rove around the forest for most of the day and maximise the chances of bear encounters, we couldn't skip a visit to nearby lake Cerknica. Taking a nice stroll down the western shore of the lake, we watched good numbers of common waterbirds and migrant waders. However the greatest show was performed by rutting Red Deer Cervus elaphus on the lake's floodplain: two stags with huge antlers were chasing females all across the lake. We all agreed they were the most beautiful stags we've ever seen! Unfortunately the great distance didn't allow us to take any good photos, but only phone-scoping documentation. We waited for dusk in the Javorniki, listening to more rutting Red Deer all around us. When night descended squeaking Edible Dormice Glis glis (Ural Owl's favourite prey!) joined the unusual chorus. The evening was rounded up perfectly, when driving back home through the forest, we spotted a Hazel Dormouse Muscardinus avellanarius crossing the road. As we pulled off in time we managed to take a closer look at this tiny and difficult-to-see dormouse. Although widespread in Slovenia, this species is not as common as the Edible Dormouse. For us it was actually only the second time we ever met with this interesting little rodent. 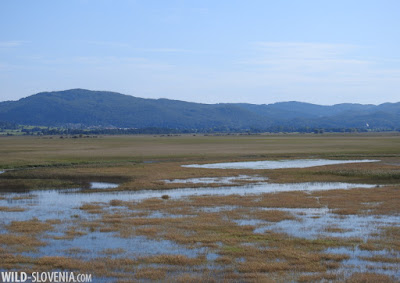 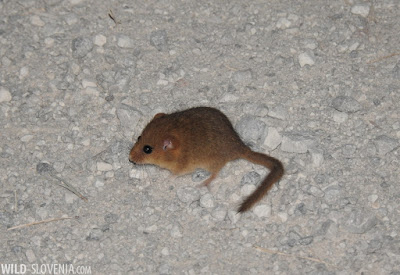 In the forests of Pokljuka 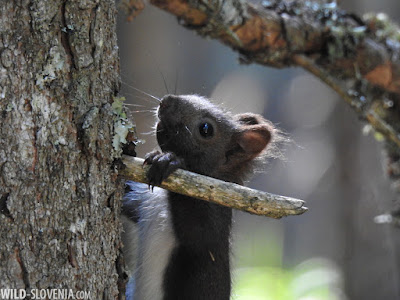 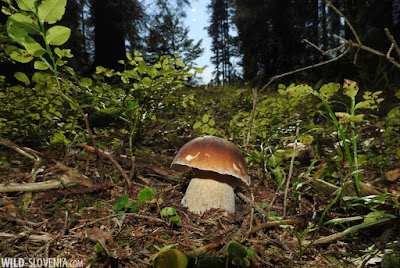 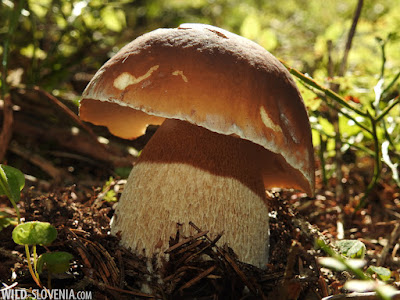 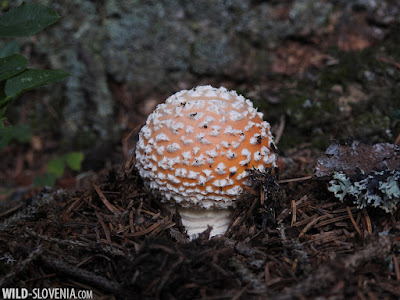 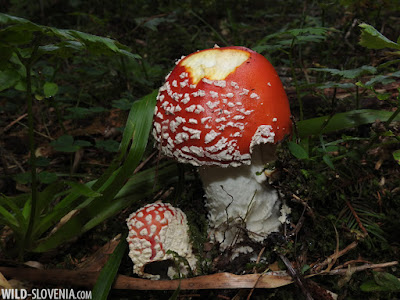 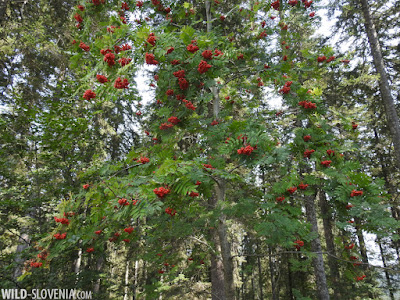 This week we made an unplanned visit to the Pokljuka plateau (within Triglav National Park) in the Julian Alps - the kingdom of alpine grouse such as Capercaillie Tetrao urogallus and Hazel Grouse Bonasa bonasia. We spent part of the day in the extensive mountain conifer forests, where we gathered a nice selection of typical birds & other wildlife of the season (fungi!). The most interesting find was a female Three-toed Woodpecker Picoides tridactylus materialising on a tree in front of us, as if by magic, after we've been hoping to see one for the whole day. Also saw a Black Woodpecker Dryocopus martius and heard lots of Nutcrackers Nucifraga caryocatactes (but only managed to see one). Otherwise many common mountain forest birds, as usual for early autumn. Apart from the above super-cute Red Squirrel Sciurus vulgaris we also saw an odd Edible Dormouse Glis glis climbing a spruce.
P.S. As you may have noticed Blogger has changed its mind (again) on the photo sizes, so now we're back to the old pic's formats (=smaller photos).
Posted by Domen & Sara at 04:07