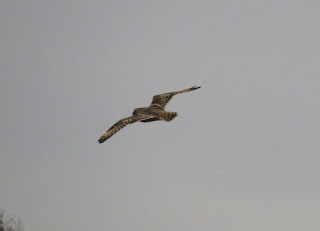 Short-eared Owl Asio flammeus is an amazing bird. Although a regular migrant through Slovenia and north-east Italy, seeing one on migration is a matter of pure luck. Much easier is to see one in winter, when small numbers decide to spend the cold season here in Slovenia. Overwintering birds have become increasingly regular in the last years and can be observed hunting in the evenings above their favoured grassland areas. The last time I saw Short-eared Owls in winter was in February 2013 when a group of 6 wintered at the Medvedce reservoir (NE Slovenia). Last Friday (29th Jan) I was in Ljubljana, so I couldn't skip a visit to Ljubljansko barje, where up to 5 birds were observed recently. In the late afternoon, Hen Harriers Circus cyaneus (+10) started to descend to their roost. Shortly after the last harrier had dropped into the tall vegetation (just after sunset), two unmistakable silhouettes appeared some 30 metres away from me - Short-eared Owls! They hunted for a while, low above the grass, giving excellent views and even landing on the ground for some seconds, before finally disappearing when the light was fading.
The next day, 5 Short-eared Owls were observed nearby - see this blog (thanks to Mitja Denac for the above pics). One or two overwintering SEOs were also reported by other friends in the Grado-Marano lagoon in north-east Italy. Looks like a good winter to catch up with this beautiful owl!

Boat trip to the lagoon of Grado 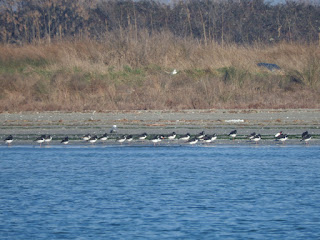 On Sunday a friend invited me to take part in a boat trip around the lagoon of Grado (north-east Italy), some 60 km away from Trieste. The most interesting birding spots of the lagoons, extending between Grado and Marano, are only accessible by boat, so this was a perfect occasion to see some less common species and to be in the field with my birding friends. Above are some of the birds we had, including the highlights.
Posted by Domen & Sara at 05:30

Trail camera - mammals of the Karst


Recently I've been playing a bit with a trail camera in the woodlands of the Slovenian Karst. Above are the results of a few days recording. Not bad for a start - the spot I chose seems excellent for wildlife. Around were also a Middle Spotted Woodpecker Dendrocopos medius, a Peregrine Falco peregrinus, a female Goshawk Accipiter gentilis and a flock of 16 Fieldfares Turdus pilaris (the first I see this winter on the Karst). Other woodpeckers in the forest are also starting to be more active (drumming, singing): Great D. major & Lesser Spotted D. minor, Black Dryocopus martius and Grey-headed Picus canus.

Yesterday I also made an interesting observation of a Wallcreeper Tichodroma muraria at the coastal cliffs near Duino/Devin (Trieste). The interesting fact of this area is that the cliffs rise up from the sea, so overwintering Wallcreepers can be observed at sea level. Similarly it can happen with Alpine Accentors Prunella collaris, which are more difficult to spot. The sea area is important for breeding Common Eider Somateria mollissima - one of the 2 (?) populations in the Mediterranean sea (saw about 10 yesterday). Other birds of note like Blue Rock Thrush Monticola solitarius and Peregrine Falco peregrinus breed on the cliffs, but weren't seen yesterday.
Posted by Domen & Sara at 10:25 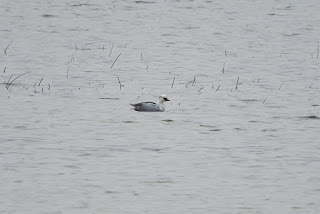 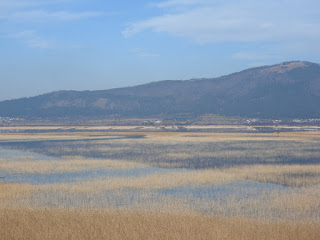 Today was the year's most productive day in terms of birding. The weather was sunny and not too cold, so I headed to Cerkniško jezero (Cerknica lake) where I inspected the lake area and surrounding forest. After some heavy rains during the last week the lake was full of water and the snow has been washed away, even from the highest nearby mountains. As expected, the turn to the new year brought a welcome winter guest: a drake SMEW Mergellus albellus. It was swimming along 11 Goldeneyes Bucephala clangula on the north-western part of the lake, close to shore. Smews often appear in Slovenia in late December or January and reach the western part of the country around new year. They are regular but still scarce on Cerknica lake, with just small numbers every winter.
Also expected (but never guaranteed!) was a WHITE-TAILED EAGLE Haliaeetus albicilla, an adult, sitting on a pole by the lake. After sitting there for some minutes it took off and headed eastwards into the forested hills. Meanwhile, a small patch of woodland (hornbeam, hazel & oak) by the lake produced once again a smart Middle Spotted Woodpecker Dendrocopos medius, more or less on the same site as last time I was here, in November 2015. Although very mobile, it showed well and allowed a single, "clean shot" (short video here). Nearby was also a Grey-headed Woodpecker Picus canus. Of the other birds present on the lake, the most notable included: Black-throated Diver Gavia arctica (1; first time I see a diver on the lake), Greylag Goose Anser anser (flock on migration), Water Rail Rallus aquaticus (1), Gadwall Anas strepera (5), Great Grey Shrike Lanius excubitor (2), Hen Harrier Circus cyaneus (2 f) and Marsh Harrier Circus aeruginosus (1 f).

Worth reporting is also a WOODCOCK Scolopax rusticola that I saw yesterday afternoon on the Karst near Lipica. I was driving in a wooded area, when the bird took off from the roadside and flew across the road. I was pleased to have such a nice daylight encounter with this secretive species, which is quite difficult to see during the day.
Another interesting observation worth sharing concerns 2 Slavonian Grebes Podiceps auritus on the sea by the Sečovlje saltpans (SW Slovenia) on Saturday 9th. A regular, but rare winter species in Slovenia, with most of the records coming from the coast or the large reservoir lakes in the north-east. This seems to be a good winter as 7 individuals were reported at this location and exceptional high numbers (up to 15) are also present on the Italian side of the Gulf of Trieste.
Posted by Domen & Sara at 01:51