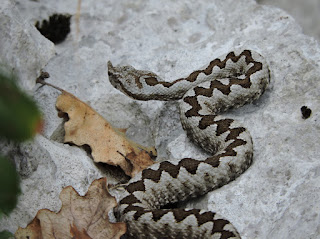 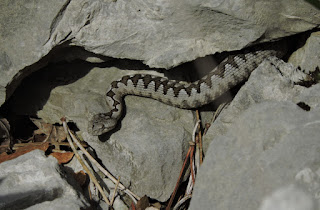 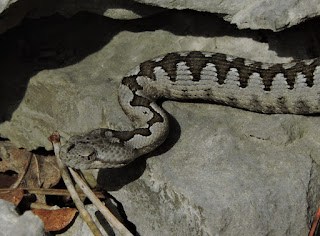 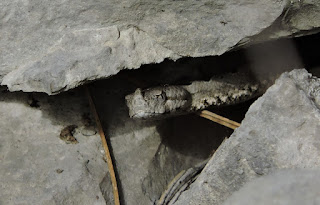 Yesterday I photographed the above Horn-nosed Viper Vipera ammodytes on a stony wall on the Karst. More precisely within the area of the Carsiana botanical garden (near Trieste), which encompasses an area of typical Karstic "rocky field". With a bit of patience the viper allowed good views down to 3 metres, while it basked in the morning sunshine. I watched it for at least half an hour. A quite cooperative animal I must say. The pics were taken with the zoom on my camera at approximately 40x.
Horn-nosed Viper is considered the most venomous snake species in Europe, although its venom is rarely fatal to humans. Its distribution stretches mainly through the Balkans to the Middle East. In Slovenia it is most abundant right on the Karst (west of the country), although seeing one is not that easy, unless you go around turning stones. They usually stick around sunny, rocky places, dry stony grasslands, limestone cliffs ect. In several years of wandering these areas I only saw it a couple of times. If I were a herpetologist the things would be clearly different.
The limestone rocks also held another typical reptile of the Karst: the Dalmatian Algyroides Algyroides nigropunctatus. Although in the photo it looks like an ordinary lizard, it is usually far brighter with a nice blue throat & head and reddish rest of the body. The individual in the pic was either a female or a juvenile (males are brighter). This species is distributed along the Adriatic coast (western Balkan peninsula). Not far from Trieste, near the town of Gorica/Gorizia, it reaches its north-westernmost point of distribution. Around Trieste it is an abundant species both on the coast and on the Karst and also easy to see (had 5 of them together yesterday).
Posted by Domen & Sara at 10:31 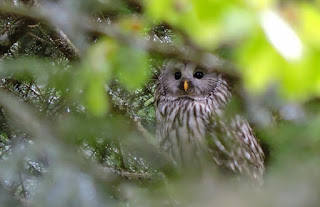 As you may have noticed, recently I added to the blog some thematic galleries of my images, from different regions of Slovenia. Each photo-gallery comprises a selection of the most representative animals, plants and landscapes of Slovenia's main natural regions. For now there are three of them: Alps, Dinaric Mountains and the Karst (links also available on the bar to the right). These three together actually represent a good half of Slovenia and are the regions in which I'm most concentrated (thus so well documented). I'd like to think these galleries could serve as a sort of "collage postcard" to show in one place all the main natural attractions (mainly birds and plants) of Slovenia. In the future I might add some other galleries covering other regions/habitats too.
For viewing the photos in the best possible arrangement, I recommend switching to the smaller format - click on the central icon of these three, found in the top right corner of the page: 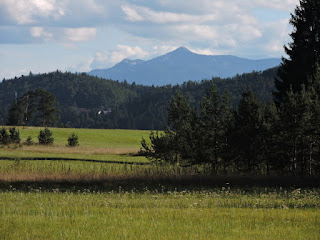 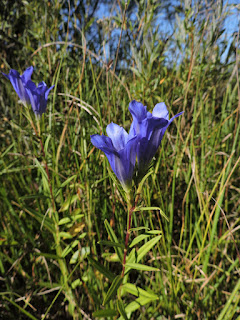 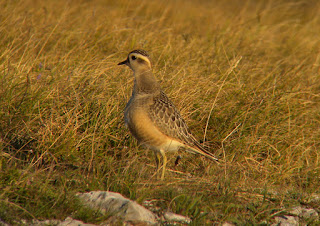 Today, after four long years, magic repeated on mount Vremščica, where I encountered the second DOTTEREL Charadrius morinellus of my life. Incredibly, the date coincides precisely with my first encounter, on the same mountain! This time however, I only saw it flying past; maybe an even rarer sight, as I witnessed to active visible migration. I heard the bird's flight call, before I got to see it. It was flying quite high and arrived from the north; then made a wide circle above Vremščica's grassy plateau and headed west, towards the Adriatic sea. I lost it in the distance, after a few minutes of enjoyable observation. I could notice the overall sandy colouring and a darker belly, so perhaps it was an adult.
Since 2011, I regularly pay a few autumn visits to the site, especially around the magic day - 6th September. Once again it proved an excellent idea.
The day was perfect for visible migration - a slight, but constant north-easterly wind, cool temperatures and strong sunshine. A Griffon Vulture Gyps fulvus and a Marsh Harrier Circus aeruginosus flying south were the most notable birds after the Dotterel. Quite a lot of Common Buzzards Buteo buteo around and one Honey Buzzard Pernis apivorus. But not many other migrants, except for a Willow Warbler Phylloscopus trochilus, a fly-by Yellow Wagtail Motacilla flava and some Swallows Hirundo rustica & House Martins Delichon urbicum.
Some late-summer/autumn flowers were nice to see too and rounded up an excellent sunny morning. Otherwise it was well worth for the panoramas alone.