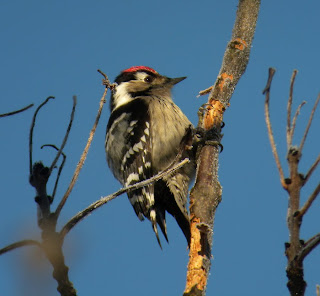 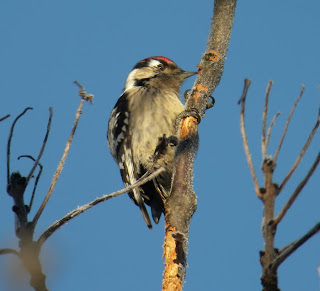 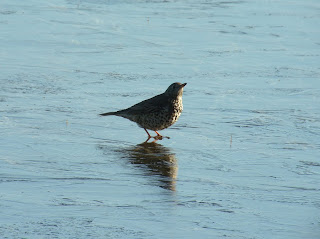 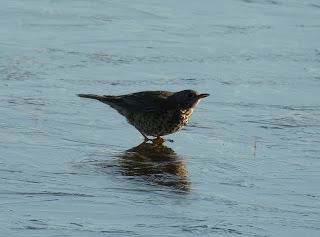 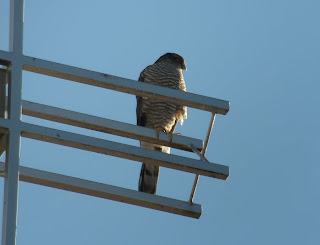 Today I've spent a lovely sunny Sunday on the Cerknica lake. Even if the temperatures were reported as very low in the morning (-10 degrees C) me and a friend of mine decided to give it a try. Fortunately the sun made everything easier with the temperatures rising considerably by midday.
On the way to Cerkniško jezero, the usual "must-stop" near Planina produced a fine male Lesser Spotted Woodpecker calling over our heads (first two pics above). Some Siskins were heard there too, but nothing very special around.
The Cerknica lake instead was almost completely frozen over. All the wildfowl was confined to a larger patch of ice-free water in the middle of the lake. Unfortunately as we scanned, we discovered that all the ducks were in fact Mallards - over 2000 birds! Just about 10-15 of them were Goldeneyes (both sexes). During the day we didn't see much else around but had some other birds like: 30-40 Buzzards, 3 Great Grey Shrikes (in different parts around the lake), a total of 10 Hen Harriers (6 together; all females except 1 male), 5 Common Gulls, Coal Tit, Goldcrest, Mistle Thrush (drinking on the ice - see pics above), 1 female Sparrowhawk on Grahovo's church (last pic above), 2 Great Egrets, flock of 10 Fieldfares around Gorenje Jezero, 2 Kestrels and 4 Roe Deers in the forest.
On the way back home (in the afternoon) we stopped at Rakov Škocjan, where we could add a few Crossbills to our short day-list.
An enjoyable day, despite the lack of birds!
Posted by Domen & Sara at 10:36