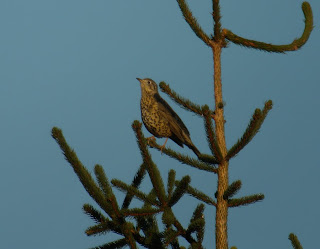 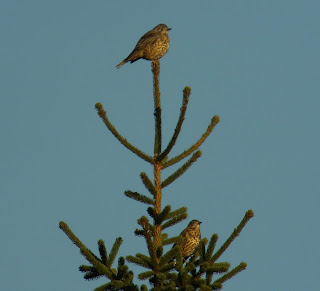 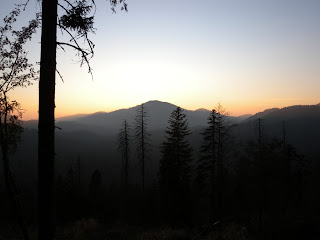 Yesterday I finally managed to re-visit the Trnovo forest (W Slovenia) after so long from the last trip there. I took a birding friend with me and together we went looking for owls and gamebirds. Just out of Ajdovščina, a GREAT GREY SHRIKE was spotted by my mate, perching on a distant wire. It flew off several times over the fields to catch some prey. Always a pleasure to see the first GGS of the winter! In the surrounding fields also a Whinchat was around with some Black Redstarts and 5 Meadow Pipits flew overhead.
The time in the forest was spent driving around the tracks and trying some good spots for Hazel Grouse (while still light) and owls (in the evening). No luck with the grouse, but the usual "dose" of owls was very welcome. Top sightings included a total of 11 Ural Owls heard (both sexes, calling and singing, sometimes in duet) but none seen. They were actually present on every spot we stopped the car. 2 TENGMALM'S OWLS were also heard calling just over our heads (odd, squeaking call; not the usual song: "po-po-po-po") and seen briefly a few times, while they flew from a fir to the other.
Other birds around included: Crossbill (a few flocks overhead), Hawfinch (heard), 2-3 calling Bullfinches, 2 Black Woodpeckers (calling), Mistle Thrush (very common -see pics above), 2 calling Nutcrackers (in an area of small spruce plantation-like growth), 1 Goshawk (heard), 1 Sparrowhawk soaring overhead, flocks of Coal Tits and Goldcrests in the conifers, along with many Dunnocks, Wrens and Robins (common forest birds) and a few Bramblings mixed with tons of Chaffinches.
We also managed to pull out several mammal species, with a lifer for both of us... In the dark, a small rodent crossed the forest road, just in front of the car, so we stopped and had a look around with the torch. And there it was: by the road a tiny COMMON DORMOUSE (Muscardinus avellanarius) staring back at us! It showed well for a couple of minutes, then we decided to leave it in peace and we left. Very distinctive were the long, furry tail, big black eyes and big pinkish snout. As the name suggests is probably quite common even here in Slovenia, but rarely seen.
On the other hand Edible Dormice were absolutely everywhere (as always), running up and down the trees and making that awful noises. We managed to see a few that crossed the road or showed for some minutes on the trees. Other mammals recorded included 1 Brown Hare, several Roe Deers and 1 Red Squirrel (black morph).
First two pics above: Mistle Thrush on spruce
Last pic: sunset over the forest - a chill in the air, the fog lifts and 4 Ural Owls start to call...
Posted by Domen & Sara at 02:09