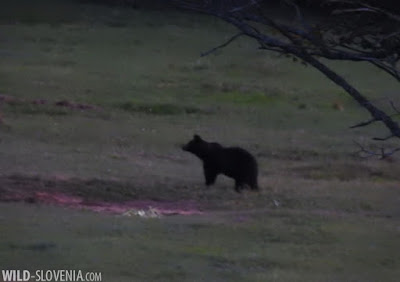 Last weekend we made two excursions into the Dinaric mountains to try and see bears and other forest wildlife. On Friday evening, the day just before September's full moon (known as "harvest moon"), we exploited the moonlight to do some night mammal watching on a forest glade. The sky was cloudless and a very gentle breeze kept the evening mist away, so we had perfect viewing conditions. Bears are usually nocturnal animals, visiting open areas to feed late in the evening, although sometimes they might be seen coming out earlier, at twilight. This is especially the case with young males which need to avoid "disturbing" adult individuals (both females with cubs or adult males) at feeding places. Therefore it is usually younger males that are more frequently observed in "unusual"  daylight hours or at twilight.
After we've settled at the side of a forest glade, an hour or so before sunset, we were soon rewarded with some mammal activity: two Roe Deer Capreolus capreolus, a Fox Vulpes vulpes and a young stag Red Deer Cervus elaphus. Then, after sunset and just when the light was beginning to fade, a magnificent Brown Bear Ursus arctos appeared. It was an immature male, probably a second year animal, given the size. It started to feed on the maize that hunters put out for deer and showed for the next 1 hour and half. Soon after darkness descended, the rising moon was lighting again the glade. In the next few hours we could enjoy the bear as well as other mammals in the moonlight. More Red Deer appeared, as did a group of 8 Wild Boar Sus scrofa and 3 Brown Hares Lepus europaeus. When we left the site we also flushed a Tawny Owl Strix aluco from the side of the road. 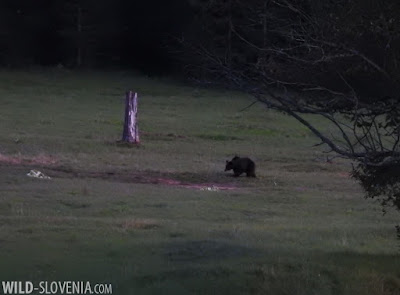 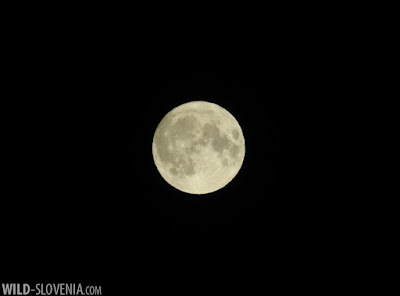 On Sunday we were again in the forest, this time for some daytime birding. We visited the area of Loški Potok, where we hoped to find some interesting birds, especially woodpeckers. Despite the forest being alive with small birds (tits, crests, finches ect.) it was rather calm otheriwse. Our only notable observation was a beautiful melanistic Ural Owl Strix uralensis which showed perfectly well and for long. After initially flushing the bird, we could watch it for some 20 minutes or so as it perched nearby on a spruce. It was so relaxed it even fell asleep in front of us! This amazingly dark morph is rather rare and present in about 10% of the Slovenian Ural Owl population. However the forests of Kočevje in southern Slovenia seem to be the stronghold of such individuals, with "mixed pairs" (a melanistic and an "ordinary" bird) being not uncommon in this region. 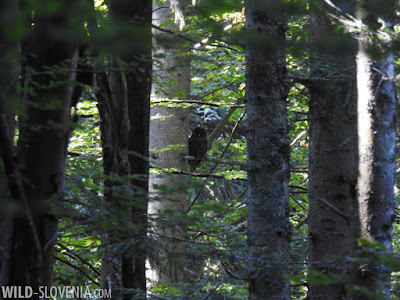 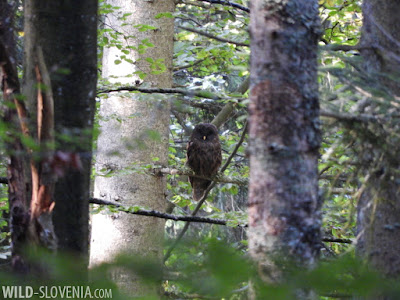 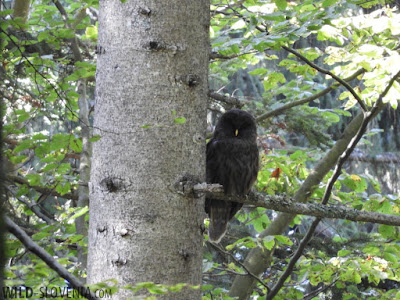 Among birds another very interesting sight was a Nutcracker Nucifraga caryocatactes collecting nuts in the middle of Loški Potok village, while in the forest only Grey-headed Woodpecker Picus canus and Firecrest Regulus ignicapillus were of note.
In the past few autumns we've been also into mycology (the study of fungi), so at this time of year we are paying more attention to the fungi we see in the forest. The overall situation is rather poor at the moment as the soil is quite dry (a condition that fungi don't like at all). Hopefully some rain in the coming weeks will make more mushrooms sprout. Below are some of the interesting fungi we found recently, as well as some typical September forest plants. 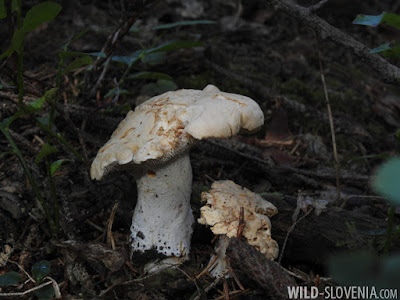 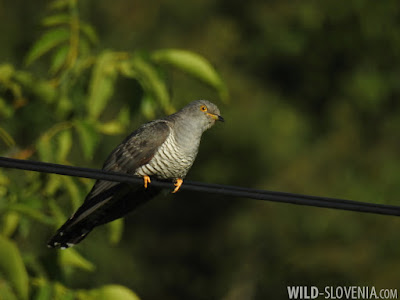 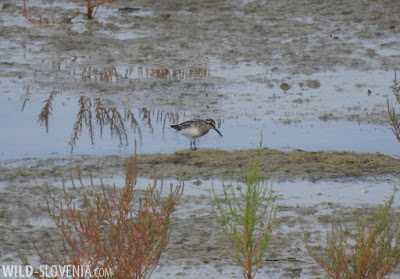 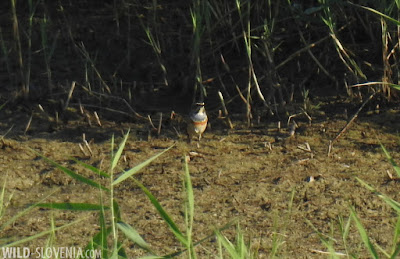 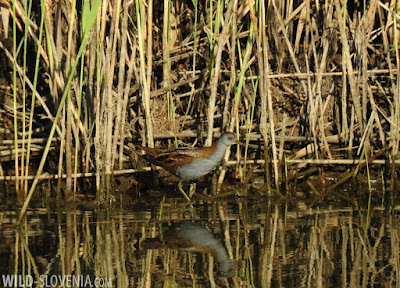 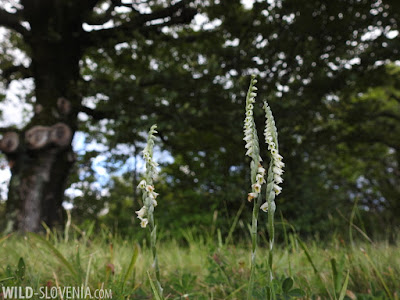 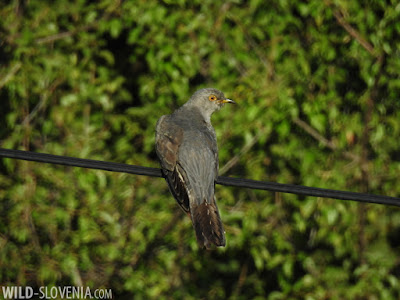 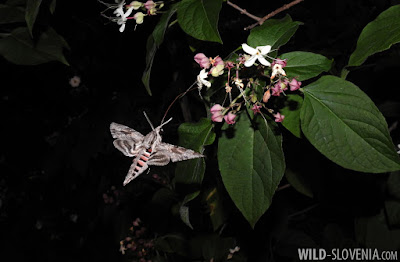 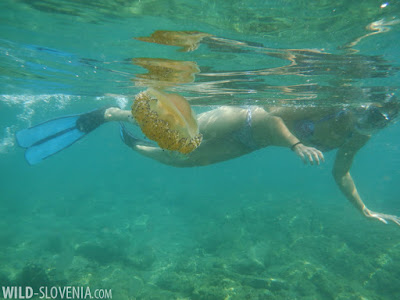 With the arrival of the first autumn rains and cold winds we are now saying goodbye to the summer season. Therefore in this post we'll sum up a few more observations and finds from our latest snorkeling trips in the Adriatic sea, more precisely in the Gulf of Trieste. The Abudefduf we found in August (see here) was observed repeatedly, every time we visited the site at Tanki rtič/Punta Sottile. Our colleague marine biologists identified it as a probable Sergeant-major Abudefduf saxatilis on the basis of close-up photos, but further researches are still underway. As we already mentioned, this find represents a new species for the Gulf of Trieste.
Among the other highlights of the summer season is certainly a close-up encounter with an Atlantic Bluefin Tuna Thunnus thynnus, a fish you don't usually swim with! The encounter was brief but very exciting as a mid-sized tuna (about 80 cm in length) swam at full speed about half a meter away from us, while we were snorkeling not far from the coast. The fish was obviously in hunting mode, as for a few moments the sea "boiled" and Mullets Mugil sp. were jumping out from the water in all directions. After approaching the shore to knee-deep water, the tuna made a few leaps and disappeared back towards the open sea. Unfortunately the encounter was too brief to take any photos... nevertheless we were also too astonished to attempt any photography. However here is a photo selection of the other marine organisms we managed to observe and photograph (with a Fujifilm Finepix XP 140) during all our recent excursions. Another similar post with more species can be found here. Enjoy! 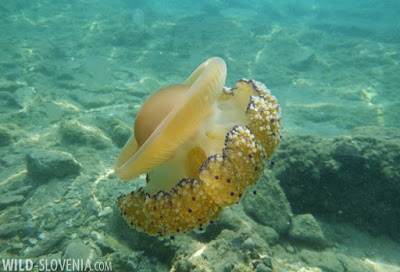 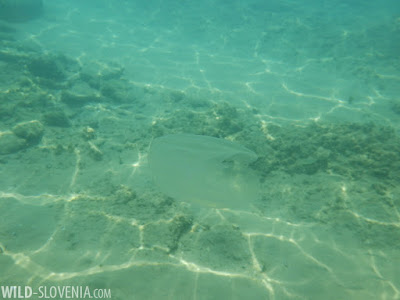 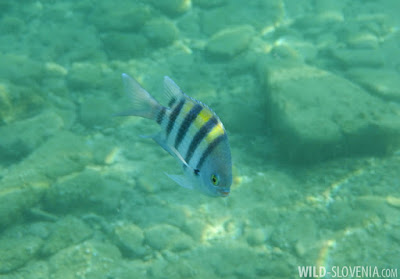 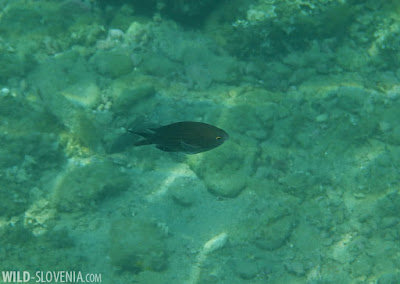 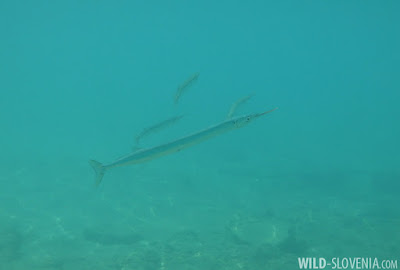 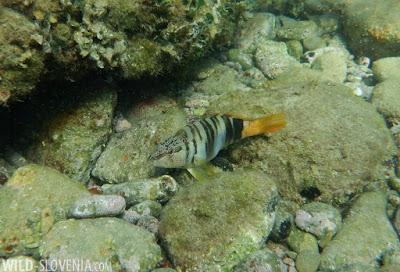 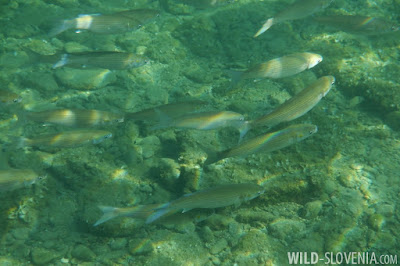