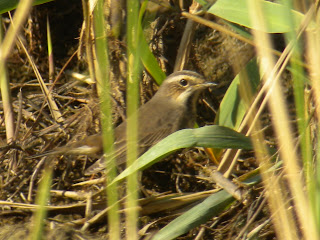 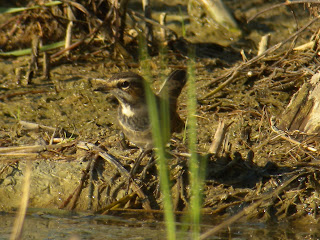 Škocjanski zatok NR: the weekly bird monitoring produced some good species this morning with several highlights. The first came in the form of 3 different BLUETHROATS - a good start to celebrate the beginning of the autumn season! All three birds were seen in the freshwater marsh area, feeding on the ground by the edge of some reedbeds. Two had a clear and brilliant bluish collar, the third instead was more monochrome with no blue at all (maybe a 1st winter female). Of course I only managed to photograph the least colorful.
Another good find was a juvenile MONTAGU'S HARRIER quartering over the brackish lagoon. It sat down on the saltings a few times as if it caught something.
Two KNOTS were also in the lagoon area, along with several commoner waders and the first Wigeon of the season here on the reserve.
Other birds of note included: 2 Black-necked Grebes, 12 Shovelers, 164 Teals, 1 Spotted Crake (in a ditch by the path, as usual), 2 singing Water Rails, 2 remaining Black-winged Stilts, 1 Ruff, 3 Curlew, 7 Common Sandpipers, 1 Common Redshank, 30 Greenshanks, 3 Wood Sandpipers, 1 Snipe, 2 Kingfishers, a few migrating Swallows and House Martins, several Tree Pipits passing overhead, 4 Yellow Wagtails, 4 Nightingales, 6 Whinchats (grazing marsh), 4 Reed Warblers, 1 Icterine Warbler (on the hedges along the lagoon), 3 Garden Warblers, 2 Common Whitethroats and several Blackcaps.
Local patch: yesterday morning I had a quite successful session of sky-watching which resulted in 4 Marsh Harriers on migration over the ridge, 2 Common Buzzards and 3 juvenile GOSHAWKS soaring over the woodland. Alpine Swifts still present in good numbers, with some individuals flying above the house as well. Also a Coal Tit in the garden, heard more or less on a regular basis.
Posted by Domen & Sara at 05:02