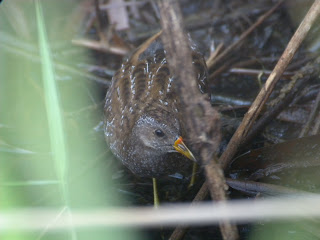 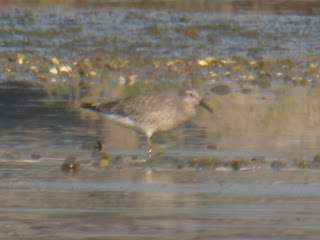 Škocjanski zatok NR: some exciting birding going on today during the weekly count on the reserve. First of all, as I mentioned in the previous posts the freshwater marsh is in the process of being mowned so there's a lot of open space with grassland now. In front of the first screening in the area I call grazing marsh there was a nice party of Whinchats this morning. They were sitting on the wired fences giving good views at the side of the screening. Two first-winter Wheatears were also a welcome sight - both birds frequently hopping and perching on a Caterpillar digger.
The first surprise of the day was a ridiculously confiding SPOTTED CRAKE feeding in a ditch by the path. I could watch the bird as close as 2-3 meters for about 15 minutes, while noisy joggers and walkers were passing nearby, maybe 5 meters away. Here's a video of it.
The second big highlight of the day was on the wader front in the brackish lagoon where I found a juvenile KNOT. It may seem odd but this bird it's quite scarce here in the North Adriatic region. It's certainly not as rare and unusual as a Red-necked Phalarope, but anyway always a good bird. On migration it is usually found in small numbers on the muddy shores around the extensive lagoon areas on the Italian side (like the river Isonzo's estuary for example). I've never seen one in Škocjanski zatok though.
For a good company the Knot had also 2 juvenile Curlew Sandpipers nearby, along with several Greenshanks and 2 Common Redshanks. Other waders included 1 Ruff, 5 Curlews, 11 Common Sandpipers, 1 Green Sandpiper, 5 Wood Sandpipers, 2 remaining Black-winged Stilts 1 Little Ringed Plover and a Snipe.
In the hedges at least two Garden Warblers were present along with good numbers of migrant Nightingales ("whistling" all around), a few Reed Warblers, Blackcaps and two Great Reed Warblers.
There was a slight vis-mig movement in the air with the first autumn Tree Pipits passing overhead, a Skylark heard and several Yellow Wagtails.
I was also glad to see a Kingfisher after so long I haven't seen one on the reserve.
A Black-necked Grebe was also present in the lagoon with quite high numbers of Little Egrets and dabbling ducks on the increase (Mallard the commonest, followed by Teal and up to 15 Shovelers). The freshwater marsh held also the usual 3-4 Night Herons with the odd migrant Purple Heron (juvenile) and an unexpected Squacco Heron.
I had some problems with my pc in the past few days, so I cannot upload more than a few images. Above is the best pic I have of today's Spotted Crake and a documentative shot of the Knot.
Posted by Domen & Sara at 07:57