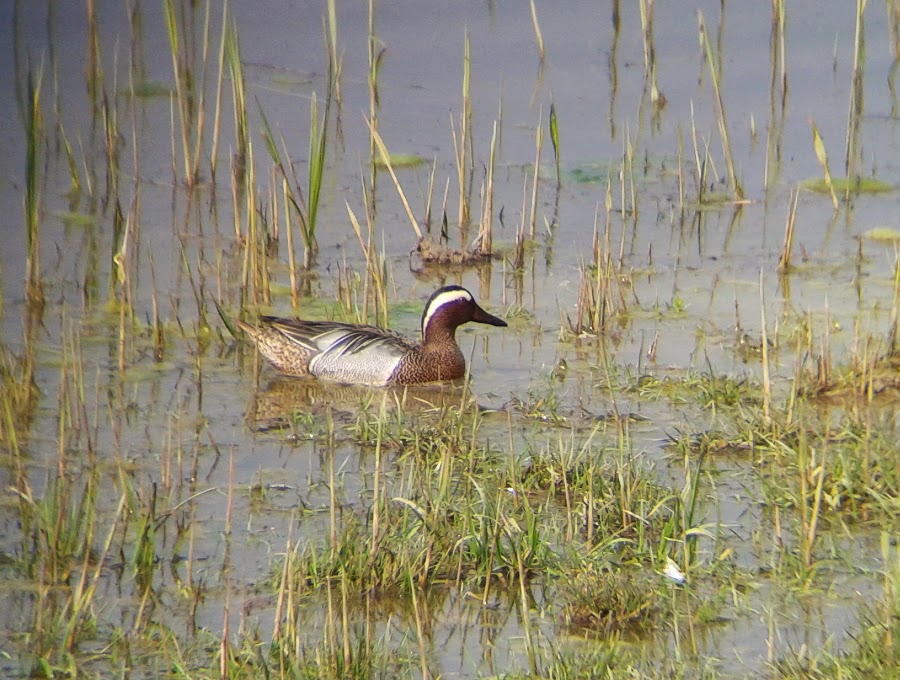 Škocjanski zatok NR: typical spring joy this morning when I spotted my year's first 3 SWALLOWS and later 3 HOUSE MARTINS flying over the freshwater marsh. Catching a glimpse of that really distinctive hirundine silhouette zipping through the sky is quite thrilling. The reserve was actually full of other true spring migrants, all back from Africa. About 30 Garganeys were scattered across the freshwater marsh, most were smart drakes (above). Otherwise there's now a general decline in the number of the other duck species. Other typical spring harbingers were 7 Black-winged Stilts, 1 Wood Sandpiper, 1 Black-tailed Godwit and 2 Green Sandpipers - all joining the Ruffs, Curlews and Snipes already present on site. Some winter birds are still around in the form of Water Pipit, Reed Bunting, Tufted Duck or the flock of 13 Wigeons. Two Cattle Egrets at the grazing marsh were also of interest, along with a female Ferruginous Duck in the area of deeper freshwater and the usual 6-7 Pygmy Cormorants.

Local patch: yesterday afternoon I had my record count of Garganeys on the sea - counted a total of 758 individuals which is really impressive. Other flocks of ducks included 30 Wigeons, 84 Shovelers, 15  Teals and a drake Pintail mixed among them. Still about a hundred of Common Gulls on passage.
Posted by Domen & Sara at 14:02