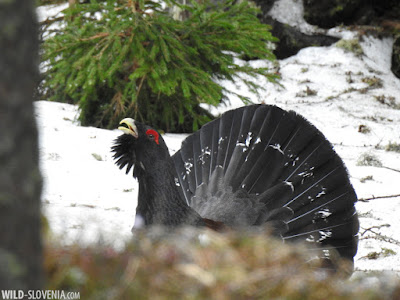 Over the past weekend we went for a change of region and travelled to the Kamnik-Savinja Alps in northern Slovenia. Of course it was a trip with a precise target - Capercaillie Tetrao urogallus. The species is a widespread breeder throughout the alpine range of Slovenia, although densities vary. Areas with higher densities include the Pokljuka and Jelovica plateus, parts of the Karavanke mountains and Kamnik-Savinja Alps, while small and isolated populations also exist in the Dinaric region (Trnovski gozd, Snežnik, Kočevsko). One of our colleagues is following and studying these birds and currently there are two "mad" males (not far apart from each other) in the Kamnik-Savinja Alps. Capercaillies are normally very shy birds and extremely difficult to see on their spring lekking grounds. It is therefore challenging to watch them without causing disturbance and possibly even disrupting their mating season. However, every spring some particular males are overridden by hormones and become "mad". This means they loose fear of humans (and other animals) and defend aggressively their territory, while performing their typical courtship display. Such males become particularly showy and can be even aggressive towards humans. In this case, for the welfare of the birds, it is wise to keep a safe distance and step back if they try to approach or attack. A local gamekeeper took us to see the first male, a rather shy (although still "mad") individual which was perfect to watch and enjoy from a distance, without causing disturbance. After around 15 minutes of excellent views, we left the bird to its ritual. 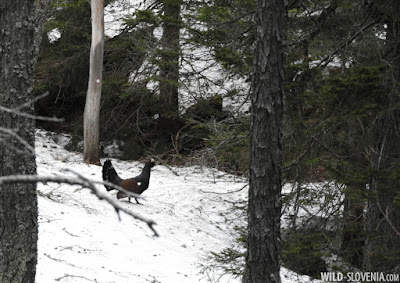 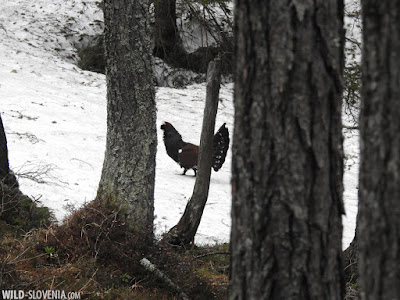 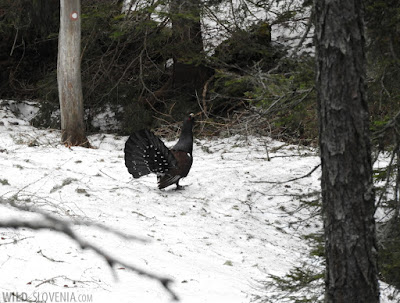 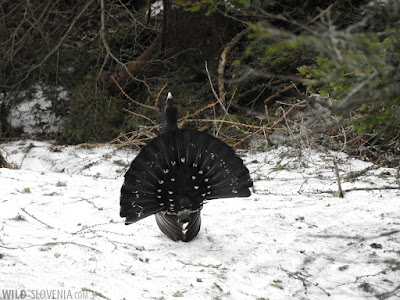 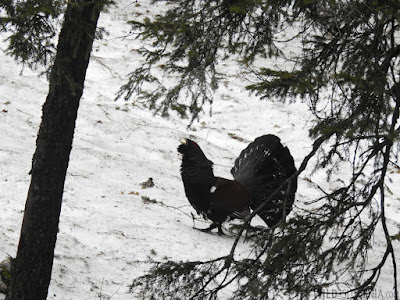 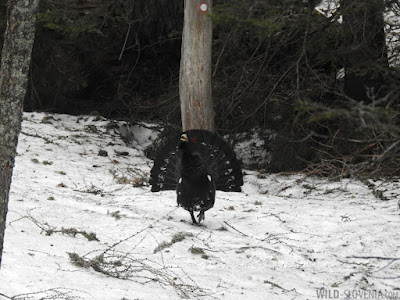 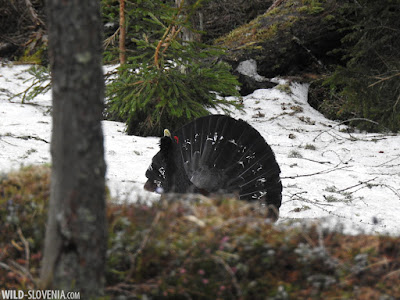 Afterwards we decided to check on the second mad Capercaillie, which was only around 1 km in a straight line from the first one. This male was more aggressive, so we minimised our stay at the site, also because the bird was defending an area close to a hiking path and had encountered some other people the same day. If such birds are disturbed by passing people, they will readily start to display even in the middle of the day, outside of their "normal hours" (= dawn). This will make them waste energy and spend less time searching for food and doing other vital activities. 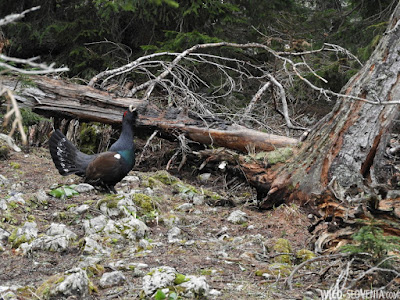 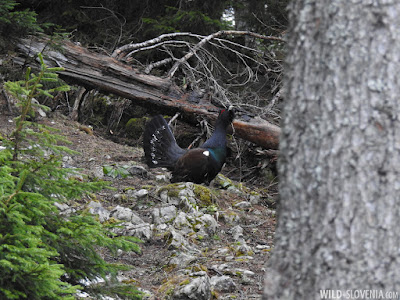 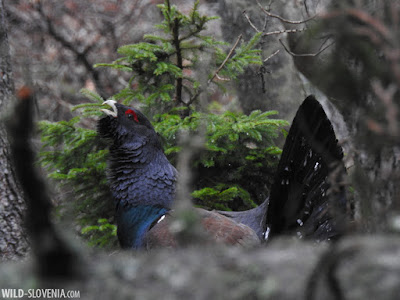 Capercaillie Tetrao urogallus - courtship display (male 1 & 2).
The conifer forests of the area, with a mixture of larch Larix decidua, Norway spruce Picea abies and silver fir Abies alba were productive also for other birds. Whilst watching one of the Capercaillies we could also hear the calls of displaying Black Grouse Lyrurus tetrix, coming from just above the tree-line. Even better, on the edge of a clearing close to the first Capercaillie, we came across a pair of Three-toed Woodpeckers Picoides tridactylus. Initially we saw a male pecking on a larch and thought it was feeding, but only later we realised it has just started to excavate a nest-hole! You can clearly see the difference on the tree in the two photos below. Nearby was also the female and the same tree had at least another fresh nest-hole, so the area was clearly a nesting site. Among woodpeckers Three-toeds are the latest breeders (living so high up in the mountains) and their egg-laying should begin right at this time.
Three-toed Woodpecker Picoides tridactylus nest-hole excavation.
Among other typical birds of mountain forests we also saw/heard Nutcracker Nucifraga caryocatactes, Black Woodpecker Dryocopus martius, Grey-headed Woodpecker Picus canus, Willow Poecile montanus and Crested Tit Lophophanes cristatus, Bullfinch Pyrrhula pyrrhula, Firecrest Regulus ignicapilla, Dunnock Prunella modularis, Lesser Whitethroat Sylvia curruca, Siskin Spinus spinus, Crossbill Loxia curvirostra and the like. Given the recent observations of our colleagues, the area probably holds also good densities of Tengmalm's Owl Aegolius funereus and Hazel Grouse Bonasa bonasia, while venturing up above the tree-line, other interesting alpine species might be found.
Looking at the plants, at 1400 metres above sea level it was like using the time machine and going back to early spring: Christmas Rose Helleborus niger, Hepatica Hepatica nobilis and Mezereon Daphne mezereum, all in fine bloom!
Posted by Domen & Sara at 06:32