Best month of the year 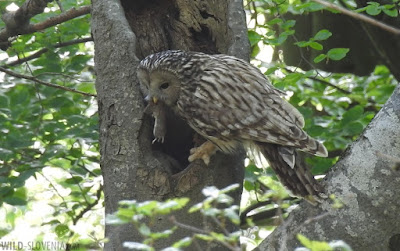 May is the busiest month of the year and currently we are in the field on a non-stop basis, at least when the weather allows it. Hence it's becoming quite difficult to keep up with all the updates on the blog. There has been a lot going on recently and in this post we'll try to summarise only part of it. Keeping our work with White-backs in the Dinaric mountains aside for a while, we'll concentrate on the Karst in the wider surroundings of Sežana. During our forest birds transect census we were able to check on the breeding progress of "our" Ural Owls Strix uralensis (see previous post) and were indeed very happy to confirm that at least one chick is present in the nest! Other, smaller chicks might be also in the nest, but one particular juvenile is probably just about to leave the cavity. One late afternoon we spent about an hour in the area, watching the nest from a safety distance. The parents were so relaxed and spontaneous that we even witnessed the male bringing a vole to the nest. It didn't actually leave the vole there, but seemed to encourage the chick to exit the cavity and come take the food outside. When this was happening Domen's camera was on the tripod, already recording - take a look at the video below. The above shot is actually a video-still. 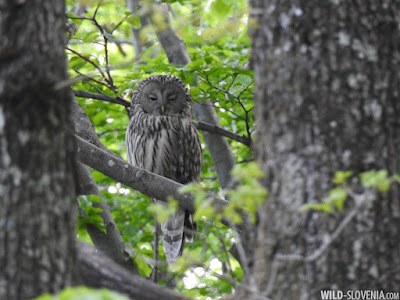 Ural Owl chick in the nest with the female, then male bringing a vole and chick stretching after the female left.

As if this amazing show with the owls wasn't enough, the surrounding broadleaved forest was alive with other interesting wildlife. Best of all was a beautiful male Collared Flycatcher Ficedula albicollis, singing in the oak canopies overhead. This bird, a common breeder in parts of southern and (especially) eastern Slovenia, is only a rare migrant through the Karst (and western Slovenia in general). Last year we also had one male in the same area (see here), so perhaps these forests are a regular stop-over site for this beautiful eastern European species. 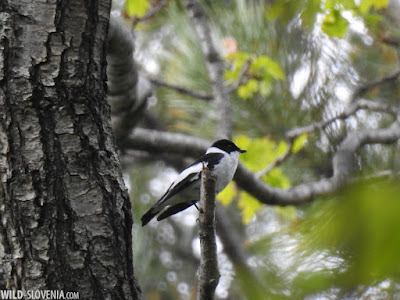 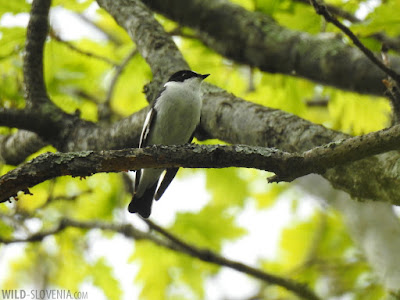 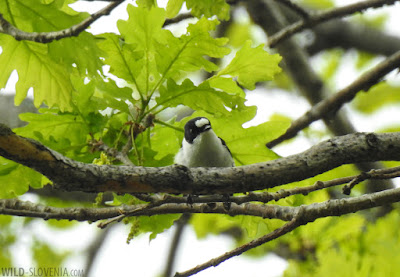 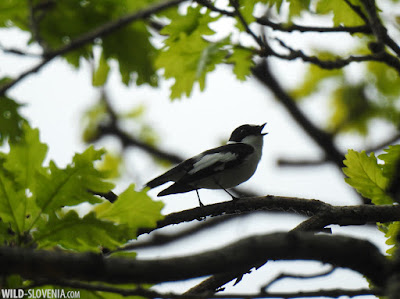 Singing male Collared Flycatcher Ficedula albicollis
By now most of the other summer migrants have returned, including later arrivals such as Spotted Flycatcher Muscicapa striata, Golden Oriole Oriolus oriolus and Turtle Dove Streptopelia turtur whose songs and calls echo across broadleaved woodlands. Although birds in such low-altitude woodlands are becoming more difficult to observe, the overwhelming greenery of fresh new leaves is a spectacle itself! As the May temperatures rise and the warm sun shines on woodland clearings, the first Beech Longhorn Beetles Morimus funereus emerge on logs and stumps, while also other forest animals seem to be particularly cooperative for photography. Among plants, the first woodland orchids are coming into bloom, including Bird's-nest Orchid Neottia nidus-avis and Narrow-leaved Helleborine Cephalanthera longifolia. 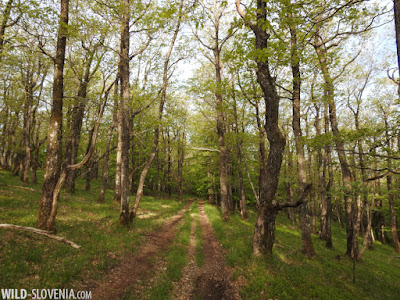 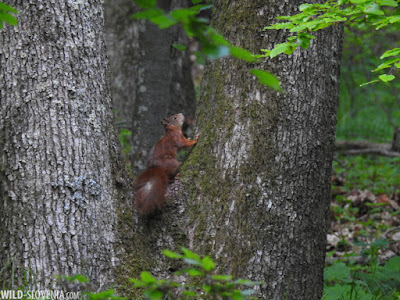 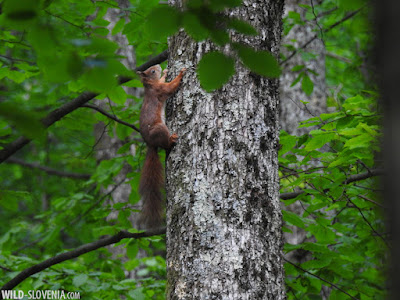 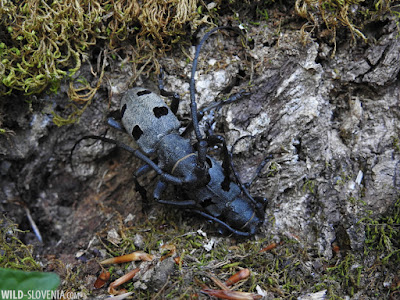 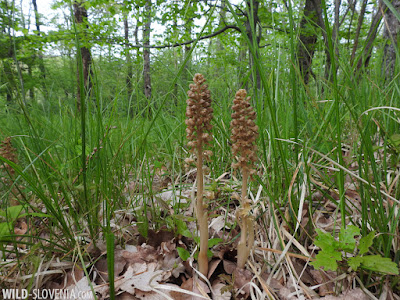 Out on the Karstic meadows the spring spectacle is even more amazing. Orchids seem to have an excellent blooming season this year, as the meadows are littered with thousands of specimens of different species. Even the smallest patch of grass by the side of the road holds at least some Green-winged Orchids Anacamptis morio, our commonest orchid. When driving we frequently notice them also on the lawns at the edge of small villages. On careful inspection one can also find other species such as the (second commonest) Three-toothed Orchid Neotinea tridentata, with its blooming peak slightly later than its Green-winged cousin. On one dry meadow near Divača we were quite happy when we came across a small patch of Fly Orchids Ophrys insectifera, while even more exciting was the find of a Monkey Orchid Orchis simia near Sežana (a rare species in the Karst). The other classical wildflowers of moment also include Illyrian Iris Iris illyrica and the beautiful Common Peony Paeonia officinalis. 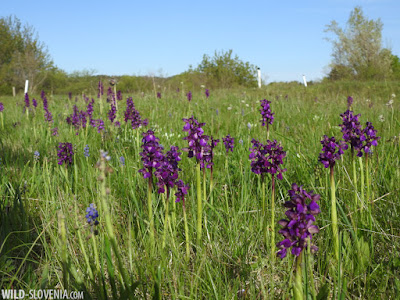 Among birds, the undeniable sign that spring has truly arrived is the return of Red-backed Shrikes Lanius collurio to the meadows, scrubs and hedges of the Karst. May is also a time when migration is slowly coming to an end, although rarities that still appear are usually top-quality ones. On the 5th of May for example we stopped at the Divača airfield to check for any potential interesting migrants. An unusual flock of "kestrels" hunting above the short grass, turned out to be a group of 7 Lesser Kestrels Falco naumanni, an extinct breeder in Slovenia and a rare but annual migrant. Still, a flock of 7 birds was more than usual! Most were immature males, but some had pretty obvious plumage features like a bluish head with no mustache and even a slight grey-blue wingbar (see pics below). Sharing the same airfield were also a Red-footed Falcon Falco vespertinus, a few Common Kestrels Falco tinnunculus and a pair of Short-toed Eagles Circaetus gallicus, while the surrounding dry grasslands held Tawny Pipit Anthus campestris, Common Whitethroat Sylvia communis and a profusion of Skylarks Alauda arvensis. Other raptors seen around the Karst recently included a good passage of Montagu's Harriers Circus pygargus, the first Honey Buzzard Pernis apivorus of the year, several migrant Hobbies Falco subbuteo and a pair of Griffon Vultures Gyps fulvus. Bee-eaters Merops apiaster migrating north and east were also seen in good numbers, a bit everywhere (even above our house). 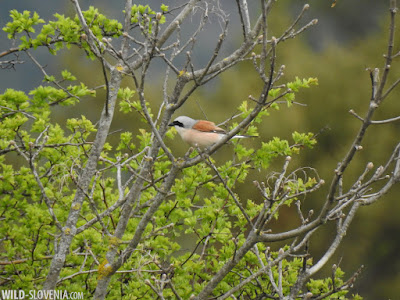 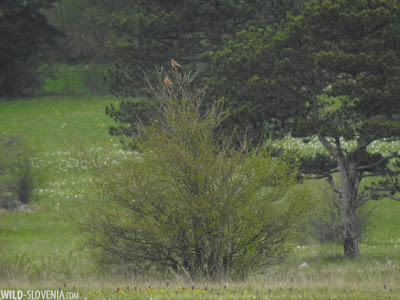 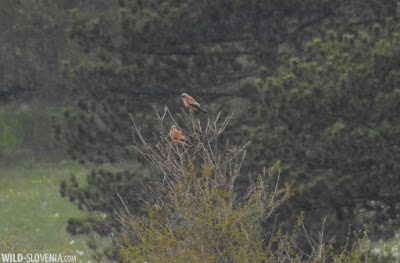 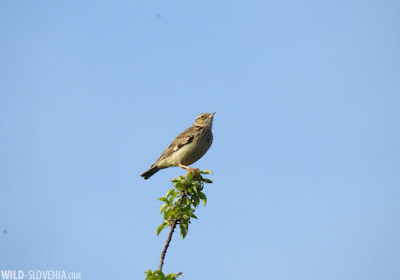 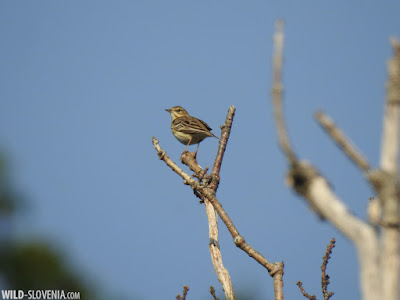 Tree Pipit Anthus trivialis
Although we live in the Karst, it's been a few years since our last encounter with a Horn-nosed Viper Vipera ammodytes (Europe's most venomous snake), so imagine our happiness (Domen's actually... Sara isn't really fond of snakes), when a few days ago we came across a large specimen, in the stony grasslands not far from home. Given its size, it was probably a female. As with all the vipers, which are usually very calm animals, our Horn-nosed Viper quietly slid away, but so slowly, it still allowed us to watch it for a minute or so. Unfortunately, the head was all that we were able to photograph.
On the butterfly front it has been a very poor season so far. Most probably the very low temperatures at the beginning of spring made a difference. Only some days ago we managed to see our first Green Hairstreak Callophrys rubi of the season, as well as Grizzled Skipper Pyrgus malvae and Glanville Fritillary Melitaea cinxia. Hopefully more to come in the next weeks.
Last but not least, something from our garden. This year we've been also waiting for the return of our local Common Redstarts Phoenicurus phoenicurus. This increasingly common species in the Karst (much rarer a decade ago) has made an appearence where we live about 3-4 years ago. This spring we heard them already in other villages, but it wasn't until yesterday that the Redstart's beautiful song resounded in our garden. It was late, but it arrived. At the time of writing, a male is singing on the top of a walnut, as you can see from the pic below. It can be tricky to spot them on sprouting walnuts in this season!
Posted by Domen & Sara at 23:28