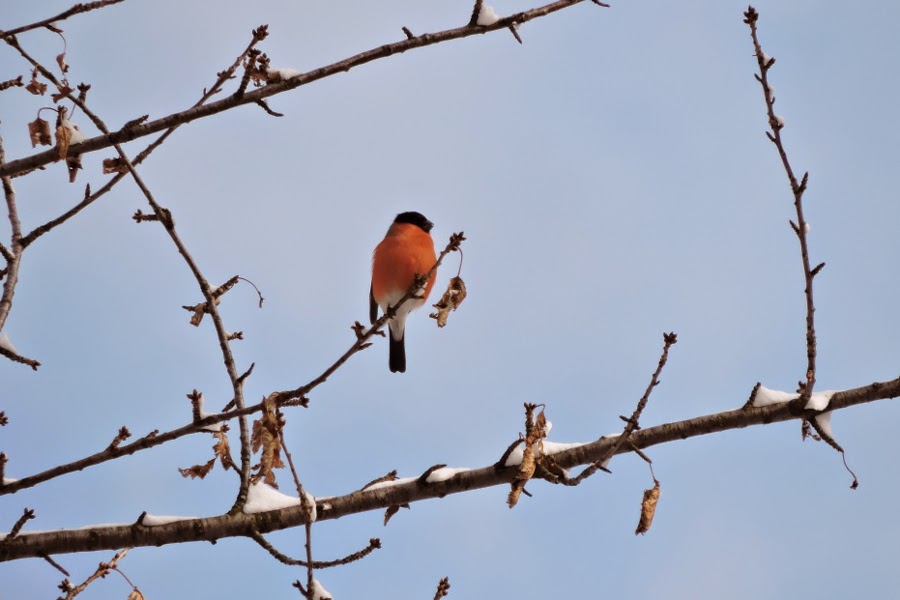 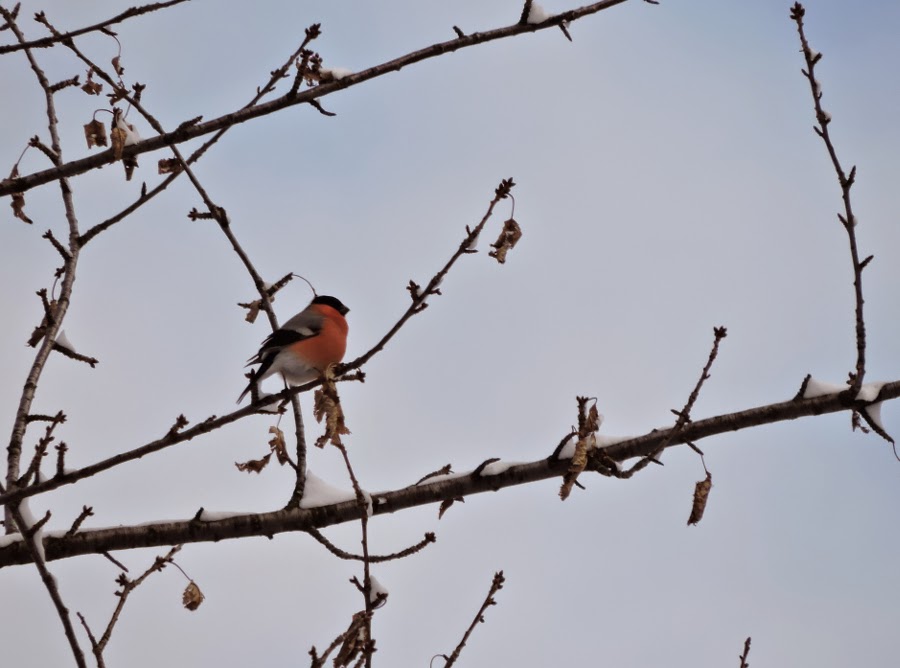 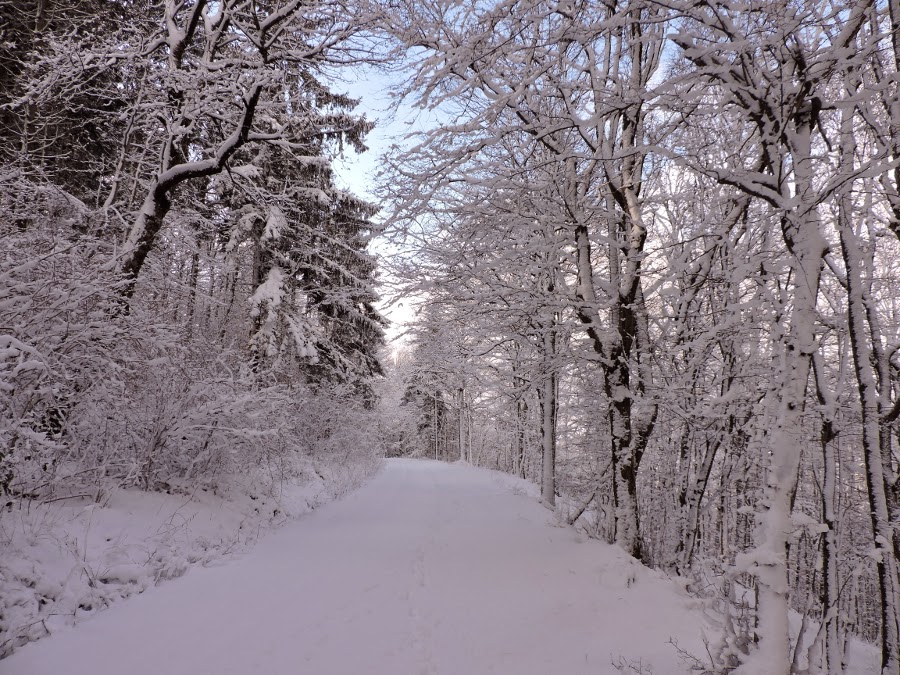 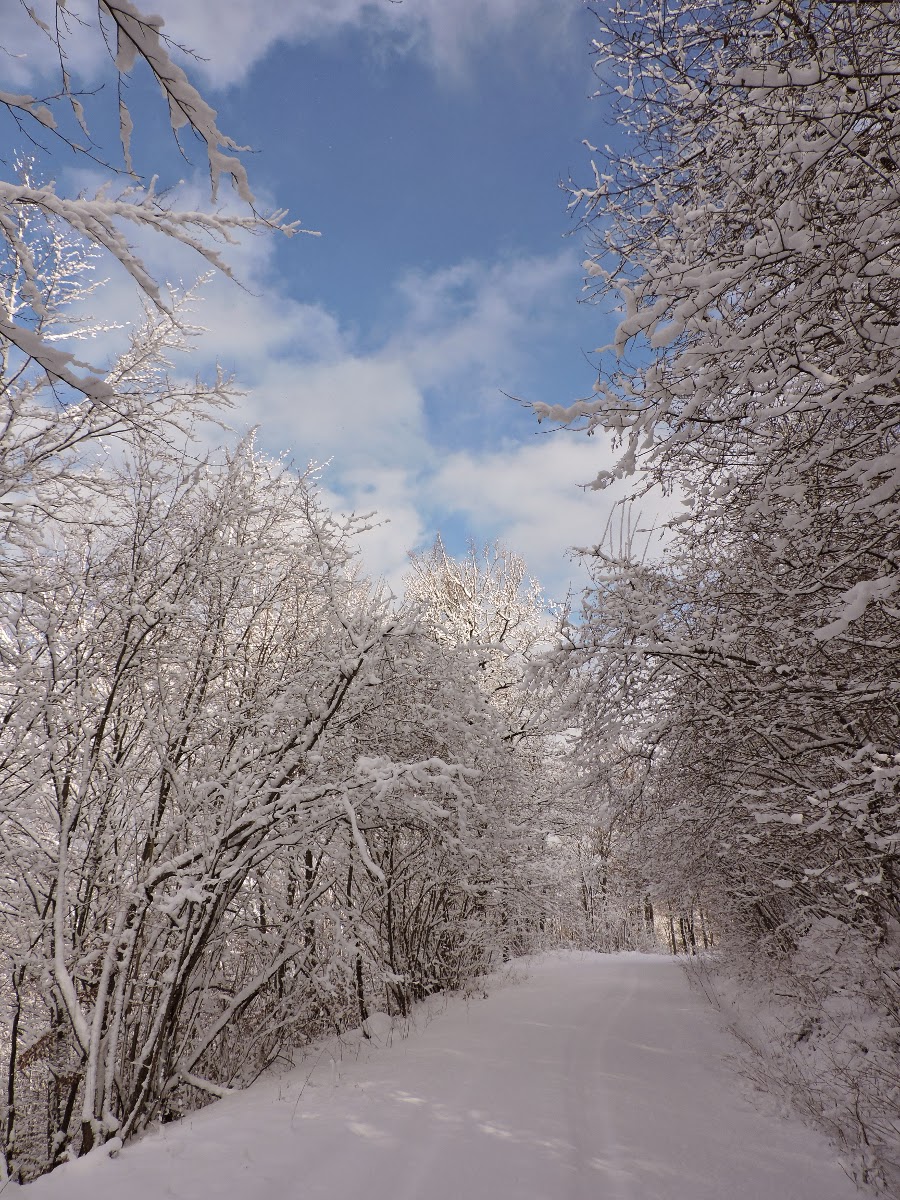 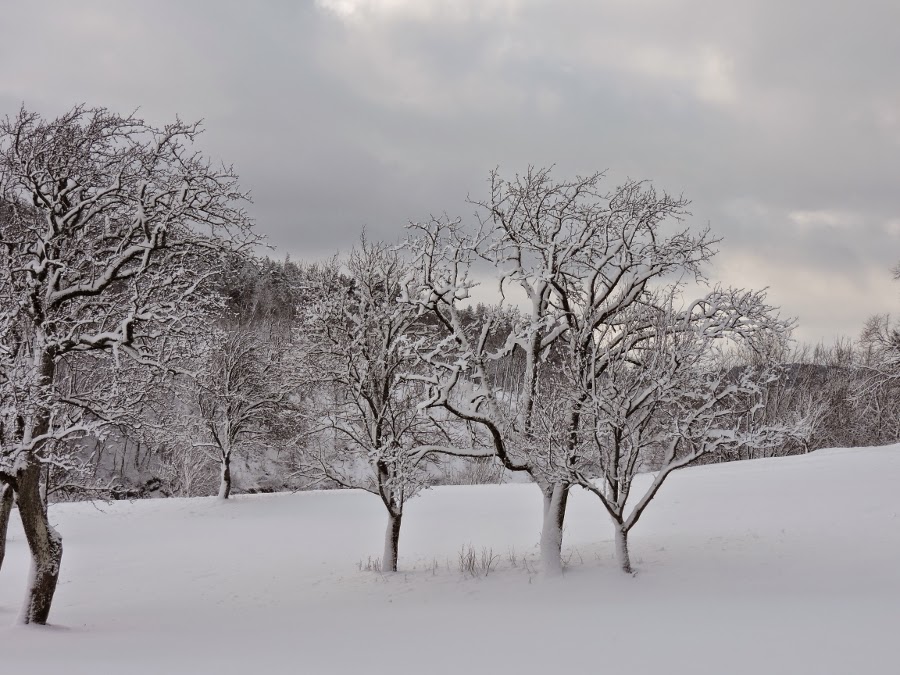 Last week was a "snow week" in Slovenia. It snowed several consecutive days and sparsely also on the Karst plateau, near Trieste. On a sunny and windless day I decided to take a walk into the woodlands of the inner Karst in Slovenia. There were about 10-15 cm of fresh, untrodden snow on the path I took. The birds were in general very quiet and kept gathered in some parts of the woodland. The highlight was a flock of 8 Bullfinches Pyrrhula pyrrhula (6 males and 2 females). They were real gems in the otherwise bleak, snowy countryside. They also allowed quite close views, when feeding on the buds of a wild cherry tree Prunus avium. Bullfinch is a resident breeding bird in Slovenia, favouring higher mountainous areas for breeding, where it inhabits mixed forests. The Alpine region and the Dinaric plateaus are two example of such places. In autumn and winter, birds descend to lower levels and are also joined by foreign birds from other parts of Europe (especially from the north). In some years irruptions occur and the species can be quite numerous. On these occasions, birds of the nominate subspecies (P. pyrrhula pyrrhula), also known as Northern Bullfinch and originating from Russia can be found in the flocks. They can be identified by their trumpeting call (as well as their larger size - almost impossible to see in the field). The winter of 2004/2005 was such a year, where it was relatively common to hear this trumpeting calls within a flock of Bullfinches in parts of Slovenia and north-east Italy.

The only other signs of presence of wildlife in the woodlands were the many tracks left by Red Fox Vulpes vulpes, Roe Deer Capreolus capreolus & Red Deer Cervus elaphus, rodents, Brown Hare Lepus europaeus and some unidentified cat Felis sp. and dog Canis sp. Here and there also a lonely Fieldfare Turdus pilaris, especially around the villages.

Later last week I also spent a few hours in the fields of Terranova (Staranzano, Italy), scanning the flocks of White-fronted Geese Anser albifrons in the hope of finding at least one of the 3 Lesser White-fronted Geese Anser erythropus, present there this winter. The quest was really hard, and at the end I failed, but instead I saw a Tundra Bean Goose Anser fabalis rossicus and a flock of +30 Golden Plovers Pluvialis apricaria. A quick check of Valle Cavanata produced also a large flock of +200 Flamingos Phoenicopterus roseus, all tightly packed together, sheltering from the wind. Quite interesting was also the presence of 19 Spoonbills Platalea leucorodia.
Posted by Domen & Sara at 10:12