Corncrake on the Karst 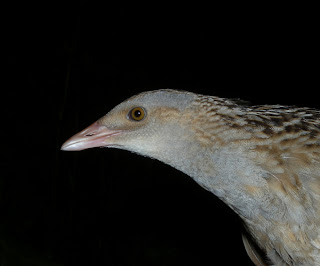 Yesterday evening I went to get some fresh air on the Karst. Visited both the Slovenian and Italian side. I waited dusk in an area of lush meadows (covered by impressive "carpets" of colorful wildflowers) while listening to the songs of: a QUAIL, no less than 6 Cuckoos (together), 1 Golden Oriole and a few Nightjars (total of 5 later).
In the hour before sunset I also managed to see 2 Hoopoes carrying food to their nest, +15 Red-backed Shrikes (really abundant here), Corn Buntings, Skylarks, 1 Wryneck (heard), Mistle Thrush and other commoner birds.
After dark I moved to an area on the Italian side where a CORNCRAKE has been holding territory for the past few weeks. As soon as I arrived, the bird was there, advertising its presence with the incessant and repetitive song. A good record for the Karst, where the species is rare due to the lack of good habitats.
The above photo is from last year's ringing session on Breginjski Stol.