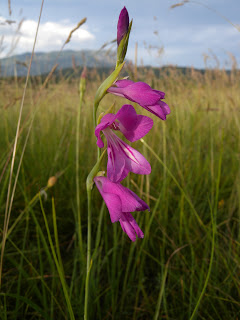 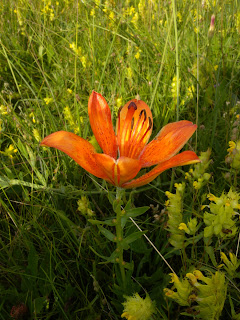 Afternoon strolls on the Karst seem to be the a good way to escape from the hot temperatures down on the coast, while seeking freshness elsewhere. Yesterday me and a friend went to see some (more!) wildflower meadows which haven't been mowed yet. We found such amazing plants like Lilium bulbiferum (2nd above) and Gladiolus illyricus (1st above), which I've never seen before, as well as stared at the endless carpet of many other wildflowers.
On the bird front the highlight was a SHORT-TOED EAGLE carrying a snake in its beak, probably heading to its nest. Other raptors included a nice Hobby which was frequently seen hunting in the air during the afternoon, sometimes along with up to 5 Common Buzzards and a Kestrel. Two juvenile Honey Buzzards were also around and put on good show while perched on some low poles out in a field. Pretty unusual behaviour for a Honey Buzzard. In the open grassland area we also found a Hoopoe's nest, down on the ground among some rocks. There must have been several juveniles in it - we heard them when the parents entered the nest hole to bring food. The adults were otherwise seen frequently flying around with beakfuls of insects. Other birds around also included a singing QUAIL, 1 Cuckoo, Skylark and Woodlark, 1 Stonechat, Hawfinch and the quite abundant Red-backed Shrikes and Corn Buntings.
Posted by Domen & Sara at 01:33