From summer to early autumn 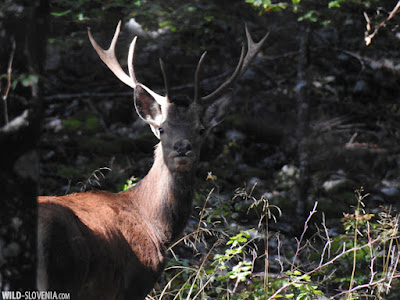 Here we are again after our last blog back in early August. Of course we've been quite active in the last few months, but producing long blogs is a time consuming business and nowadays, as you may know, we find it easier to post updates on Twitter. However for those of you who prefer the blog versions (we actually do!) here's an update from what happened in August and September so far. Although in these two months we've been working our regular areas as we usually do, we've also spent about 3 weeks abroad (in Norway & Montenegro) and that doesn't really fit into this blog, so maybe we'll produce some trip reports on our separate page sometime in the near future.

For most birders the second half of August & beginning of September mean migration time, wetland birding & finding rare waders. We acually enjoyed quite a lot of that in Montenegro, including seeing several rare birds and experiencing nice "falls" of migrants. When we are in Slovenia however our attention turns to the habitats we can find on our doorstep in the Karst: dry grasslands and forests. In late August the dry karstic grasslands can still produce some interesting wildlife, although not quite as much as in spring. Short-toed Eagles Circaetus gallicus are easier to observe in late summer as juveniles joining their parents can be seen hunting the open areas. In September they are also joined by migrating Short-toeds, so it's no wonder we see this species on a weekly basis, while driving to work or around the Karst. Honey Buzzard Pernis apivorus and Marsh Harrier Circus aeruginosus also start to move in late summer and their migration was already evident in the last days of August. 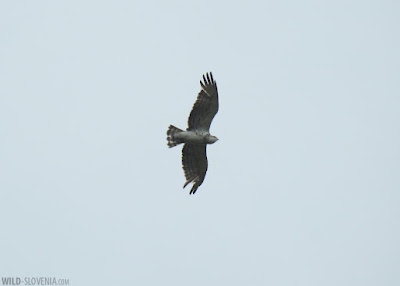 Even if one is not looking specifically for birds, there's also other wildlife to see in the dry grasslands. During an afternoon stroll near Divača for example we came across at least 10 caterpillars of the Spurge Hawk-moth Hyles euphorbiae, feeding on their larval food plants. On karstic grasslands the commonest species of spurge at that time of year is Nice Spurge Euphorbia nicaeensis, although some caterpillars were also found on the overall more widespread Cypress Spurge Euphorbia cyparissias. 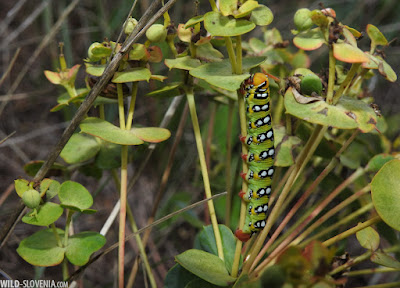 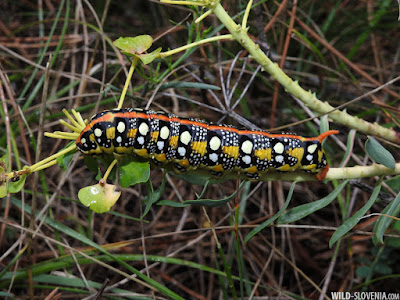 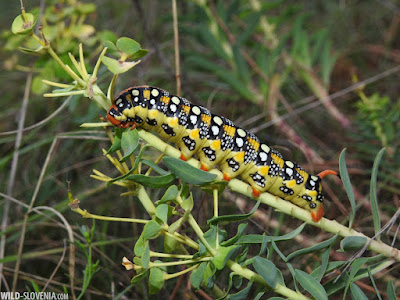 Late summer is also an excellent time to look for the rare Saga pedo on dry limestone grasslands. However what we usually see is lots of Praying Mantises Mantis religiosa (even in our garden), while we only find the rarer grasshopper once every few years. On the botanical front there's not a great variety of plants as in spring, however some are quite characteristic of the season. Amethyst Eryngo Eryngium amethystinum is certainly the one that steals the show, however there are several others that add some colour to the otherwise bleak dry grass: Winter Savory Satureja montana, Liburnian Savory Satureja subspicata subsp. liburnica, Mountain Leek Allium senescens/montanum, "Yellowish Leek" Allium ericetorum/ochroleucum (leeks have lots of synonyms!) and Stemless Carline Thistle Carlina acaulis to name some of the most "visible".

Later in the season, some dry grasslands and hay meadows in the Karst host an even more interesting plant - the last blooming orchid of the season. Autumn Lady's-tresses Spiranthes spiralis is a relatively scarce orchid found across Slovenia, however on some meadows it can be really abundant. We are lucky enough to have a nice set of meadows full of this species not far from home and every year we try to make at least a visit to count them. This year there seemed to be more plants than in other years. On the 22nd of September, in one meadow we counted 277 specimens (area of cca 1800 m2), while another nearby meadow held 187 specimens (on cca 1200 m2). A few other single specimens on other surrounding meadows added up to the final total of at least 482 blooming plants. A rather impressive number in our opinion. One interesting fact with Autumn Lady's-tresses is that in the continental part of Slovenia it flowers already in late August, while here in the Karst, due to warmer temperatures (and less rain) it does so a month later. 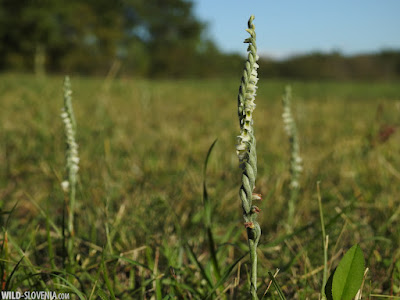 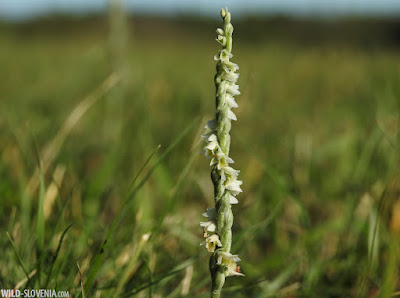 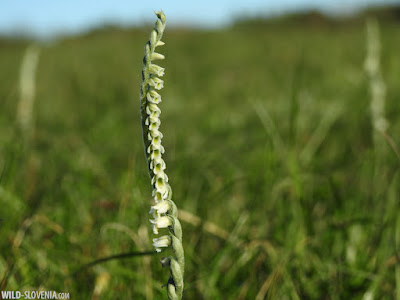 In September we've been dragged once again into the forest for that special event that is the rutting season of Red Deer Cervus elaphus. Although a common and locally abundant species in the forests across Slovenia (especially in the Dinaric mountains) Red Deer is a relatively recent coloniser of the Karst and is therefore always a joy and privilege for us to enjoy its autumn courtship season so close to home. This year we had the opportunity to visit the best area for watching and listening to the rut on several occasions, usually in the afternoons after work. During our first visit on the 13th of September we could hear several stags rutting, but the intensity of the rut escalated in the next week and when we visited again on the 20th the real show was on. Not only we heard up to 6 rutting males simultaneously, but we also managed to observe at least three stags. The topography of the area makes it quite difficult to spot the rutting males, as they usually hide in the thicker oak stands, while open areas of limestone screes and grasslands are small. Therefore every observation here is even more appreciated. To add a bit of extra wildness to the place, there's always a few Chamois Rupicapra rupicapra grazing on the screes, while a check of the muddy puddles along the path sometimes reveales the footprints of a Brown Bear Ursus arctos, a regular but not a very common visitor to this part of Slovenia. Among birds there's always a chorus of different woodpeckers accompanying the rut, including Middle Spotted Leiopicus medius, Grey-headed Picus canus and Black Woodpecker Dryocopus martius. 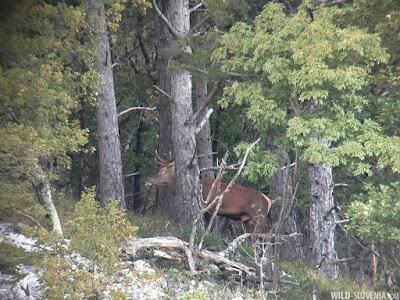 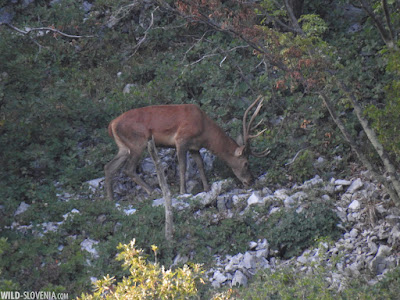 Away from the Karst, our usual circuits in late August and September were (unsurprisingly!) in the Dinaric forests on Snežnik's plateau. The main focus as usual were rare woodpeckers and decent areas of old, unmanaged forest. During one visit in late August we managed to achieve the second, but woodpeckers mostly eluded us. However the forests were alive with migrating Wood Phylloscopus sibilatrix & Willow Warblers Phylloscopus trochilus, as well as Pied Ficedula hypoleuca and Spotted Flycatchers Muscicapa striata, while overhead we had several noisy Honey Buzzards Pernis apivorus, possibly also on migration. As if by magic, a very decent rain shower also brought out, crawling on the forest floor several Alpine Salamanders Salamandra atra prenjensis (belonging to the southern, Dinaric subspecies, unlike the nominate one living in the Alps). A pair of Ural Owls Strix uralensis was also very nice to see, as it is always the case with this widespread forest predator. 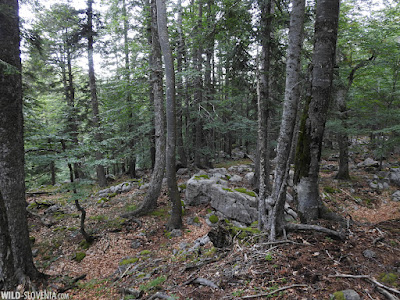 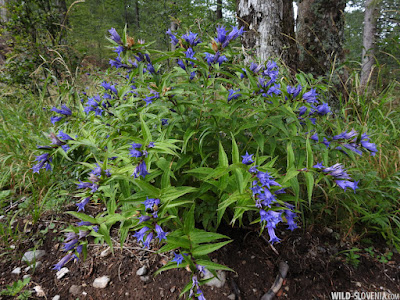 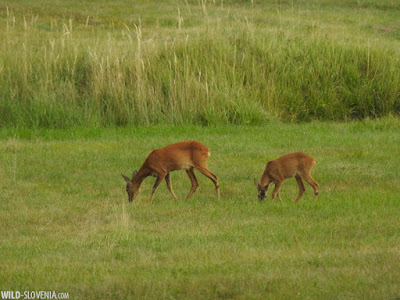 Although we enjoyed the Red Deer rut in the forests close to our home, in September we also experienced it fully in the Dinaric mountains. Here deer numbers are very high and rutting stags can be heard virtually anywhere in these forests, frequently also during the day. On a couple of occasion we also had some closer encounters with males, including the relatively young individual in the photo below. Adult stags tend to be rather shy and are difficult to approach. During walks through the forest we also came across many signs of Brown Bears Ursus arctos, although we weren't lucky with seeing the animals themselves. A few of our recent trips to these forests proved once again that bears are not easy to see and although chances might be high in some areas, there's always the element of luck playing an important part. Sometimes just walking in the forest and knowing that a bear could be just around the corner, makes the whole experience so exciting! Some of the most interesting bear signs we found included claw and rubbing marks on small trees (silver firs Abies alba) that bears use for communication with one another and large rocks turned over by hungry bears. A small house in the middle of the forest was surrounded by electric fencing to prevent the bears from breaking in through the windows. Muddy paw prints were visible under the windows and the wooden shutters had claws marks. Although we have seen similar bear signs on other forest houses and huts before, it was the first time we came across a house with electric fencing! 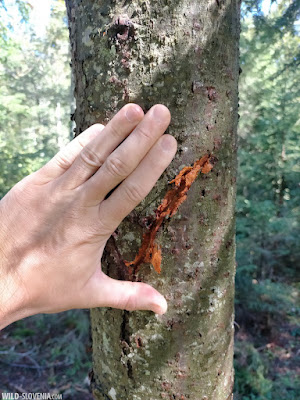 In late September, after some abundant rains the Dinaric forests were again full of fungi. Although most people go looking for various edible Boletes (Boletus), our favourite mushrooms remain the less conspicuous ones and those that depend on dead wood. One particularly interesting species is the "Fir Coral Tooth Fungus" Hericium alpestre which only grows in autumn on dead or decaying silver firs Abies alba. It is overall a rare and endangered species, but can be locally common in some forests of the Dinaric mountains, where silver firs abound. Every season we come across a few of them, but they are not always so fresh and good-looking as those we found recently on Snežnik. 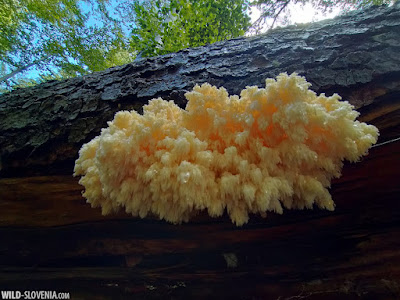 On our last visit to the plateau we were also greeted by the first snow of the season covering the very top of Snežnik (1796 m). Not unusual given the mountain's name (Snežnik=snowy mountain). Hopefully there will be still some nice autumn weather ahead of us, before the advent of the real snow that will cover this mountain until next spring! 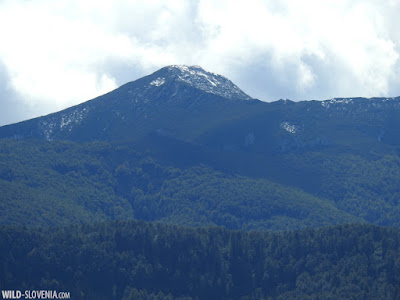