In and out of the forest 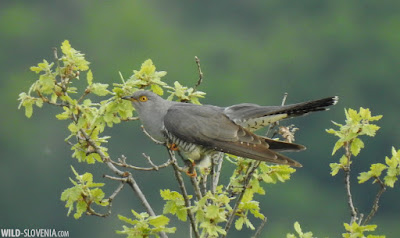 The second half of April has seen us divided between quite different climatic zone. Due to the altitudinal difference between the Adriatic coast, the Karst and the Dinaric mountains, we are frequently exposed to considerable changes of temperature (and seasons!). Sometimes, when moving from the Karst up into the Dinaric mountains, it's a bit like using the time machine and travelling back in time! The vegetation across most of the Karst (400-500 m a.s.l.) is already lush green, while on the Snežnik plateau, above 1000 m, it still feels like winter. A touch of spring is given by the occasional singing Tree Pipit Anthus trivialis and blooms of Trieste Gentians Gentiana tergestina, Mountain Pasqueflowers Pulsatilla montana and Grape Hyacinths Muscari botryoides in the limestone grasslands on the edge of the forest.

When studying White-backed Woodpeckers Dendrocopos leucotos lilfordi in the Dinaric beech forests of Snežnik, it's not difficult to experience all sorts of nasty weather in the span of a few hours. One day, when I took poor Paul with me, it went from clear skies, to fog, to sleet, to hail and finally to strong burja/bora (wind) and sun. When the skies cleared, the wind was so strong we couldn't census woodpeckers anymore. Despite this, we had the opportunity to check on a White-backed Woodpecker's nest that has been previously found by a colleague. The male was incubating and occasionally flying out to check the surroundings. The nest was located at an astonishing 20 metres from the ground, in a dead snag on a live Sycamore Acer pseudoplatanus. The species frequently chooses this tree species (and height) in commercial forests, where other suitable trees are lacking. 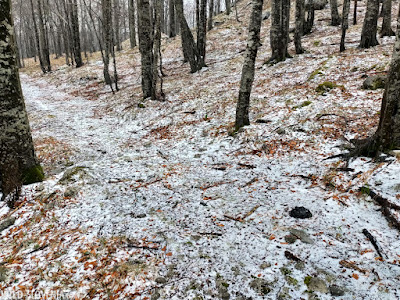 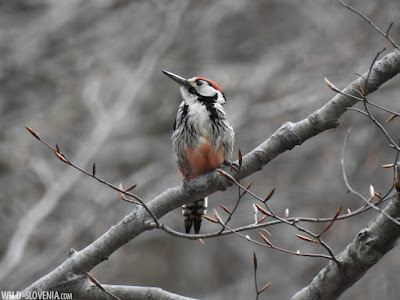 A few days later we were again on the Snežnik plateau, working an area of nearly old-growth forest within a forest reserve. In 12 hours of roving across the most inaccessible karstic terrains, we found a pair of White-backs collecting food for the nest. However, as it was extremely difficult to follow them through the rocky terrain of these forests, we weren't able to find the nest. Still we were pretty happy of spending the day in one of Slovenia wildest and remotest parts. Other birds in the area were rather scarce, but a Nutcracker Nucifraga caryocatactes, Black Woodpecker Dryocopus martius, a pair of Tawny Owls Strix aluco and some Rock Buntings Emberiza cia along a forest roads were the most interesting species that added (a bit of) variety. 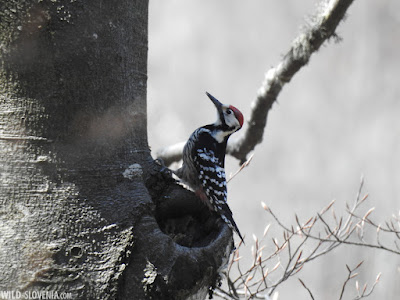 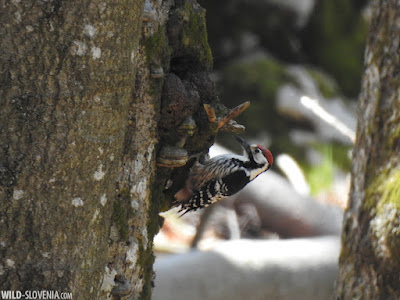 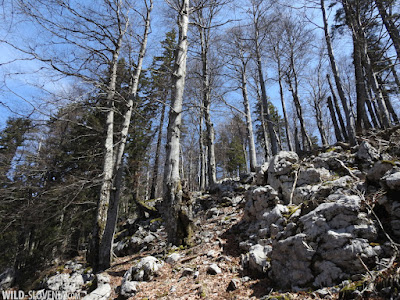 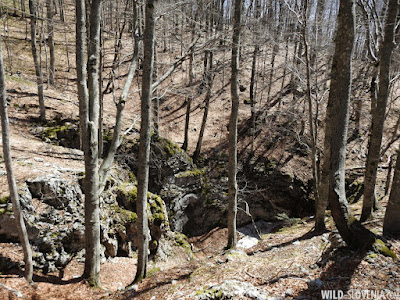 At an altitude of around 1300 m a.s.l. the first leaves of Ramsons or Wild Garlic Allium ursinum have just began to sprout, so we could enrich our sandwiches with this tasty seasonal forest salad. However, when collecting wild garlic one should be very careful not to pick up the wrong species. False Helleborine Veratrum album, a toxic plant, sometimes grows right among Ramsons. Other toxic and potentially fatal plants that could be mistaken for Ramsons include Autumn Crocus Colchicum autumnale and Lily of the Valley Convallaria majalis. In the photos below, note the multiple leaves of the False Helleborine with their distinctive longitudinal grooves on the surface. Ramsons leaves are single, soft, completely smooth and smell of garlic. 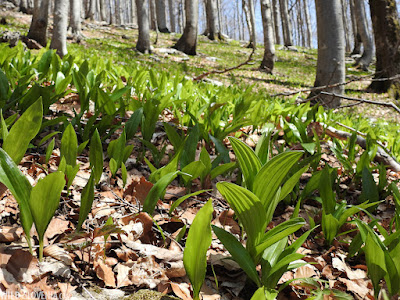 On another occasion, while tracking a different pair of White-backed Woodpeckers in a commercial forest, I could observe some interesting behaviour. After the male drummed repeatedly for a few hours and I already thought it wasn't paired up yet, the female suddenly turned up and they copulated in the trees above my head! It was the first time I witnessed copulation of this rare species. Afterwards I could follow the female on a feeding trip, where it flew from stump to stump, pecking out large larvae bored in the rotten wood. Old beech and fir stumps represent an important source of food for White-backed Woodpeckers in commercial forests, where other types of dead wood are usually being removed. 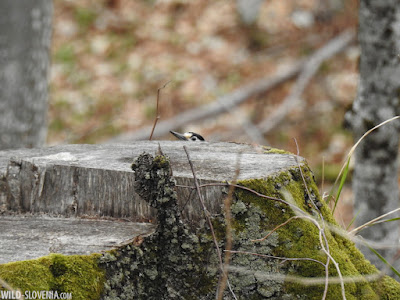 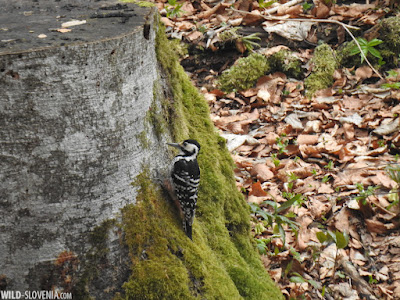 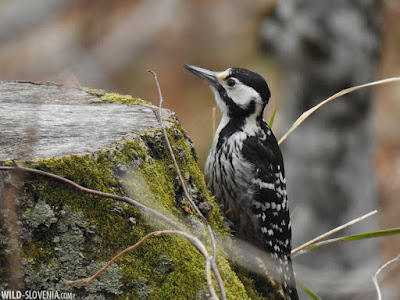 Down the altitudinal gradient, in the flysch hills of Brkini (500-600 m a.s.l.) in SW Slovenia, the beech-oak woodlands have just turned green. The recent rainfalls have filled all the forest streams and puddles on the muddy roads. This is the perfect time of the year to go herping (looking for amphibians), as Fire Salamanders Salamandra salamandra are quite easy to find. In wet weather females can be seen depositing their larvae in small pools in forest streams. They can be also be found crossing forest roads. In muddy puddles created by vehicle wheels it's not unusual to find the very small and attractive Fire-bellied Toad Bombina variegata. The upperside colouration is identical to its muddy surroundings, while the underparts sport a vivid pattern of yellow and black. In larger pools and ponds also Common Frogs Rana temporaria have deposited their large clumps of eggs and now the first tadpoles can be seen.

On the bird front it was rather interesting to find two territorial Willow Tits Poecile montanus in the Brkini hills, at an unusual altitude of around 600 m a.s.l. The species in Slovenia is usually linked to mountain beech-spruce forests above 1000 metres and only locally it has been recorded lower down in hilly regions during the breeding season. The Brkini hills host an amazing diversity of tree species and alder Alnus glutinosa is quite common along the watercourses. Alder is one of the key species in the habitat of Willow Tits in Northern Europe, and apparently, at least locally also in Slovenia. 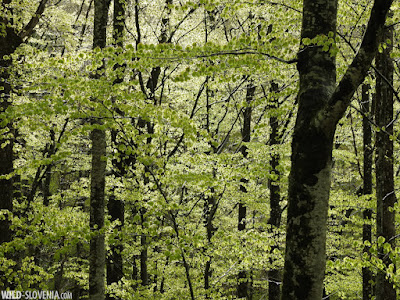 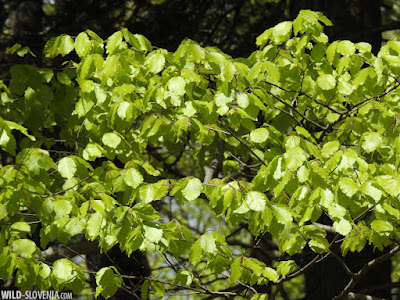 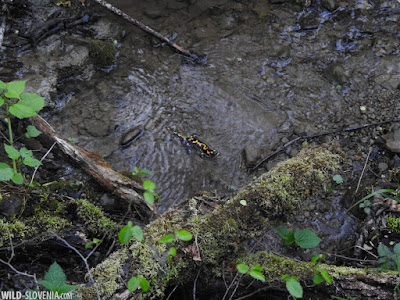 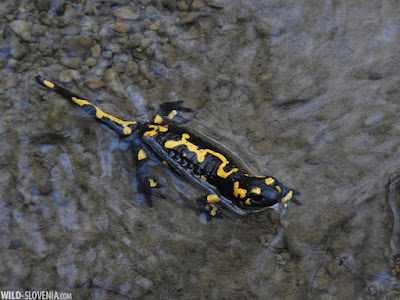 Also the woodlands in the limestone Karst are turning green these days, although the oaks are quite slow in the process. There's still some light penetrating the woodland floor, so now several species of orchids are appearing. One of the earliest woodland orchids to bloom in spring is the Pale-flowered Orchid Orchis pallens, usually out in the second half of April. Like every year we payed a visit to a small dolina near Divača, where the species can be found growing sparsely under some hazel bushes. This year we were surprised to count around 25 blooming orchids - a rather good number compared to other years, when we usually only noticed 3-5. The species is quite scarce and locally rare in Slovenia. Later on the Pale-flowered Orchids give way to Sword-leaved Helleborine Cephalanthera longifolia and Bird's-nest Orchids Neottia nidus-avis, both out this year on the very first days of May. We're lucky enough to have both species growing in the woodland just behind the house, as well as the beautiful Peonies Paeonia officinalis that are also just beginning to open. 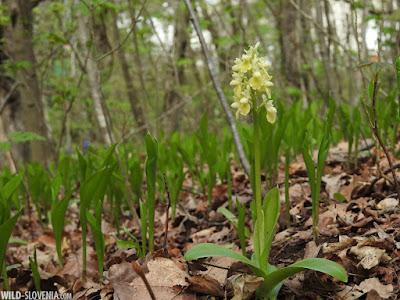 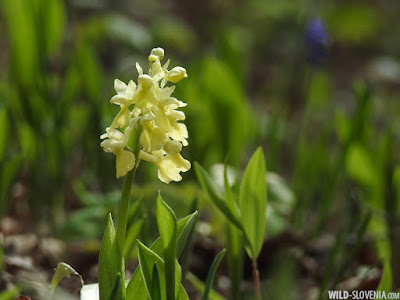 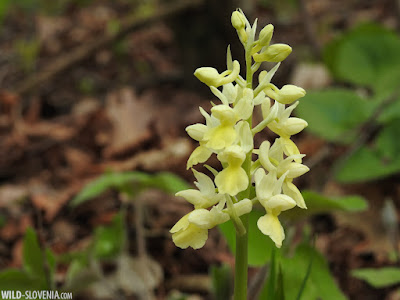 But there's not only flowers in the woodland behind our house. A male Cuckoo Cuculus canorus has been holding territory for several weeks now and yesterday we managed to track it down and finally see it really well. Cuckoos are common but most views in the forest involve fleeting glimpses or birds sitting on distant trees. We're also very happy that at least one pair of Common Redstarts Phoenicurus phoenicurus has returned to our neighbourhood and is usually one of the first birds that wakes us up almost every morning. Other recent ramblings in the Karst included some orchid & plant hunting in the meadows (although the best time for this has yet to come), as well as some local birding. In the second half of April there have been quite a few Montagu's Harriers Circus pygargus around, usually stopping to hunt on the dry limestone meadows together with groups of Kestrel Falco tinnunculus and the occasional Hobby Falco subbuteo. In Istria the orchid season is a bit ahead and in mid April we already enjoyed our first Green-winged Anacamptis morio & Lady Orchids Orchis purpurea, while Early Spider Orchids Ophrys sphegodes were already looking a bit poor. 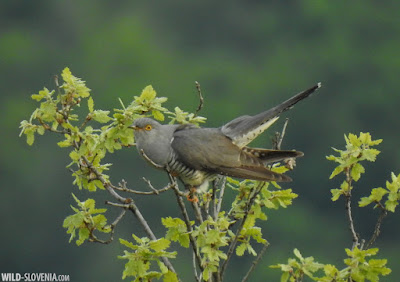 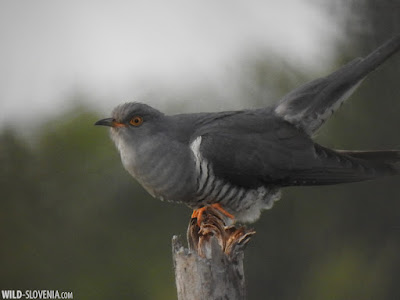 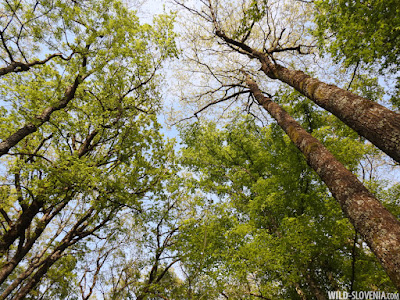 Last but not least, the coastal wetland of Škocjanski zatok NR has been producing very interesting sightings this spring. In the second half of April, days of rainy weather brought rarities like Collared Flycatcher Ficedula albicollis (only the 2nd record for the reserve & rarity on the coast), Red-rumped Swallow Cecropis daurica, Caspian Tern Hydroprogne caspia and many others, including the welcome summer migrants that breed in the wetland. There were too many species to list them here, so for more sightings from the reserve see here & here.
Posted by Domen & Sara at 12:27