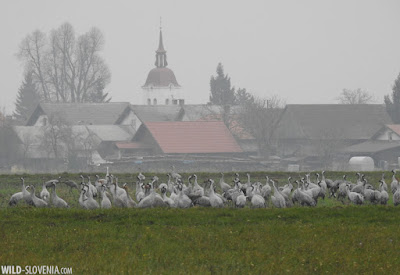 Early to mid November is the peak migration time for Common Cranes Grus grus in Slovenia and in the wider Northern Adriatic region. In the last twenty or so years this migration event has become quite phenomenal, with every coming year hitting the records in terms of numbers. Thus, as reported by Dejan Bordjan (our national crane expert), in spring 2021 an estimated 93.000 Cranes migrated over Slovenia on the way to their North European breeding grounds. Now in autumn several thousands more already passed Slovenia on their southward migration to the Mediterranean, while many more have yet to do so in the next days. A first peak was had in a couple of days in late October, while the second wave is probably upon us right now. On Sunday 14th November a flock of around 1200 Cranes landed on the wet meadows of Cerkniško jezero, to rest and spend the night there during a spell of bad weather. Funny enough the next day I (Domen) had to count migrating Cranes over Postojna, but the weather didn't look promising - low clouds and fog shrouded the Javorniki mountains, where Cranes usually pass. So I decided to check Cerkniško jezero first thing in the morning. It was a great idea - hundreds of cranes were in the arable fields just north of the lake, putting on a great show. These rather shy animals require large open areas for landing, where human disturbance is at the lowest. It therefore took some time for all the noisy flocks to assemble in a quiet spot where they could forage in tranquility for some time. Still, dog walkers, tractors and the like probably made their stop quite stressfull. Eventually I succeeded in counting the gathered flocks and the tally stood at 750 birds - so only part of the large flock seen the day before. 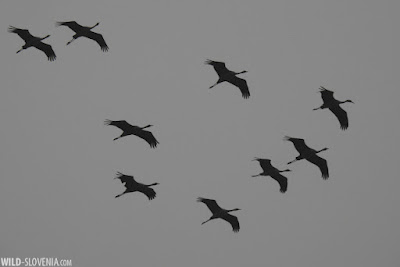 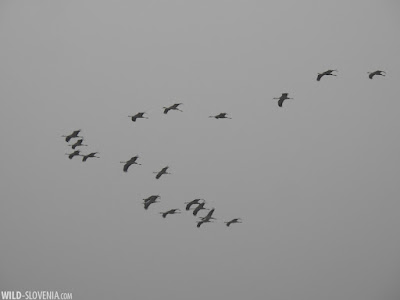 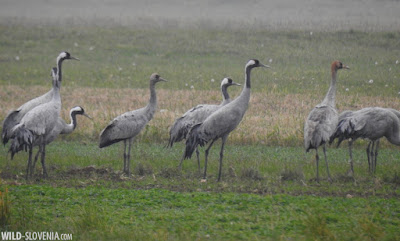 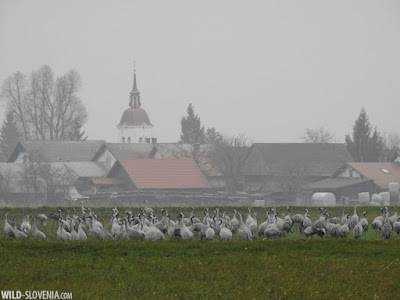 Short video of the Cranes - turn on the volume (also listen out for the juvenile's whistling calls).
While counting the Cranes I was also distracted by a few other good birds in the area. A quick look around the fields away from the Cranes produced an adult White-tailed Eagle Haliaeetus albicilla resting on a pole, 3 Hen Harriers Circus cyaneus, a Great Grey Shrike Lanius excubitor and a small flock of 8 White-fronted Geese Anser albifrons, the latter being a rather scarce species on the lake.
Despite the weather conditions didn't improve much during the day, some flocks of Cranes apparently decided to migrate eventually. In the afternoon I observed 3 flocks of around 120-130 birds each, migrating above the Karst between Divača and Sežana (some over our house!) and heading straight towards the Adriatic (Trieste). A friend who saw them later near Trieste reported that the strong burja/bora wind swept them low, towards the sea, before they managed to take a small thermal and head west towards the lowlands of northeastern Italy. 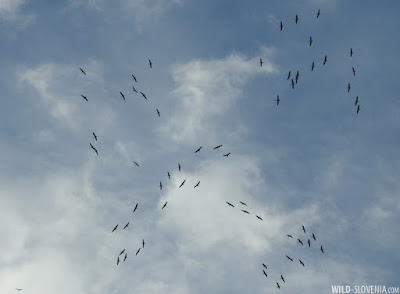 A few days earlier, during fieldwork near Pivka, apart from several flocks of migrating White-fronted Geese Anser albifrons, we also observed a group of 6 Golden Plovers Pluvialis apricaria (a rare species in this area) being chased by a Peregrine Falco peregrinus. Also here were several Hen Harriers Circus cyaneus and a Great Grey Shrike Lanius excubitor - the two most typical winter birds of open farmland. 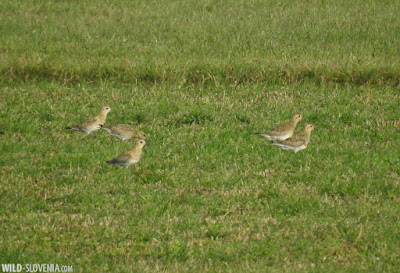 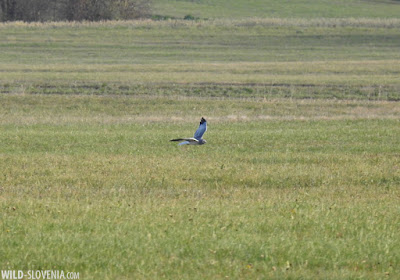 Over the past weekend we did some local birding in the Karst around Divača. First we actually went to take some measurements in the habitat of Middle Spotted Woodpecker Leiopicus medius (which we heard several times). On the damp oak woodland floor we came across a nice Fire Salamander Salamandra salamandra, a typical amphibian of wet forest with small streams & frequently out in the wet November weather. Later on we moved to Škocjanske jame (Škocjan caves) where we spotted our first Wallcreeper Tichodroma muraria of the season. One to two Wallcreepers regularly winter at this site, while others choose the more thermophilous cliffs of the Karst edge. Even better than the terrible shot below is this video we made in phone-scoping (and yes, Domen is now on Twitter!). 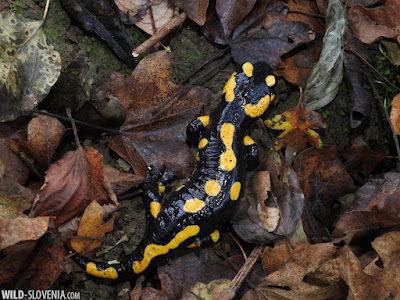