The sunny side of the Alps 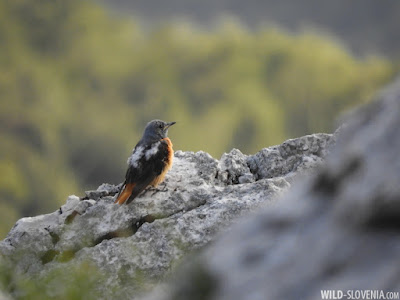 Back to the Alps for a two-day excursion, again in the beautiful Lower Bohinj Mountains (Triglav National Park), but this time further to the west in the Vogel area (old post here), ascending the mountains from Tolmin. The gorgeous alpine flora is still in full swing, from the mountain pastures at the forest edge, up to the rockiest parts around the highest summits. This year we are certainly making the most of alpine wildflowers! Regardless of the already full summer season, which is ornithologically very quiet, the alpine meadows are still full of birds. In the belt of alpine pastures around Planina Razor, as well as in the mountain pine stands, we came across noisy families of Red-backed Shrikes Lanius collurio, Rock Buntings Emberiza cia, Bullfinches Pyrrhula pyrrhula and a nice male Grey-headed Woodpecker Picus canus (feeding on ants at the base of the pines), while some other goodies followed higher up (we'll get to those later). As already mentioned before, this year is resulting excellent for herping. Even this time we had a close encounter with a rather fat and very cooperative Adder Vipera berus slowly crawling on the mountain path. The predominant butterflies in this belt were Arran Brown Erebia ligea and Chalkhill Blue Lysandra coridon, while higher up on the sub-alpine meadows just above the treeline we found many Blind Ringlets Erebia pharte, Alpine Heaths Coenonympha gardetta, as well as the interesting dark subalpinus variant of the Sooty Copper Lycaena tityrus and a Clouded Apollo Parnassius mnemosyne. 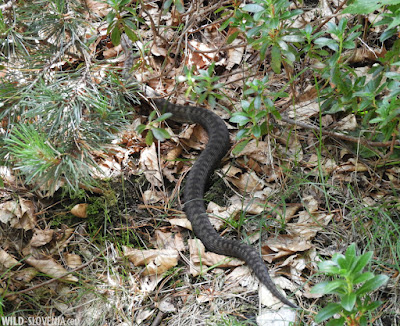 Higher up, where the lush sub-alpine meadows meet the limestone screes we came across two typical birds that depend on this particular habitat, maintained open by the grazing of cattle and sheep. As we decided to spend the night up on the mountain ridge, in the evening we had the opportunity to listen to the song of two Rock Partridges Alectoris graeca, perhaps one of Slovenia's most difficult birds to see (and one of the most sought-after by visiting birders). The species is still locally common on alpine pastures of the Primorska region (those mountains in the Julian Alps facing south and west), but only where grazing is present, therefore it is increasingly endangered by land abandonment. In the Karst this bird used to be very common until the World Wars, but became almost extinct later, due to the overgrowing of open areas. The other species usually sharing the same habitat with the Rock Partridge is the Rock Thrush Monticola saxatilis. We were happy to see not only 1-2 juveniles, but also a stunning colourful male which allowed close views. The area was also shared by several noisy families of Wheatears Oenanthe oenanthe, the adults being busy with parental duties. 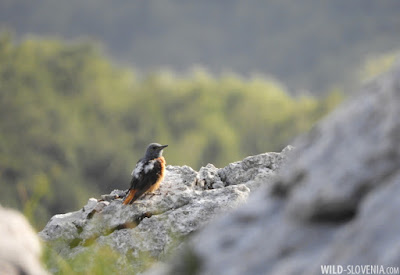 The altitudinal belt from around 1800 metres and above, supports an amazing rocky garden of alpine flowers, now all coming into bloom. Here we enjoyed this year's first Zois' (Crimped) Bellflowers Campanula zoysii, an endemic of the Southeastern Limestone Alps, with a restricted range between NE Italy, Austria and Slovenia, most abundantly found right here in the Julian Alps. Also for us to enjoy were such charismatic species as Pink Cinquefoil Potentilla nitida, Eastern Cinquefoil Potentilla clusiana, Edelweiss Leontopodium alpinum, Julian Columbine Aquilegia iulia (endemic to Slovenia) and Petkovšek's Poppy Papaver alpinum subsp. victoris (also endemic, only found in the Bohinj-Krn mountain range). 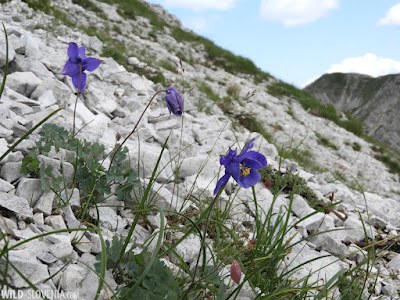 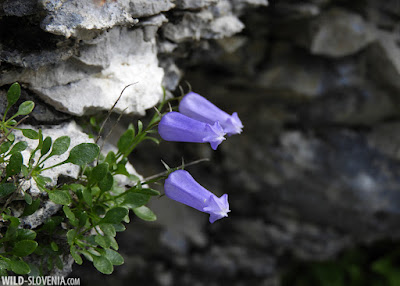 On the top of the ridge, dividing the regions of Primorska (south) and Gorenjska (north), breathtaking views opened in front our eyes as we could see most of the Julian Alps, with mount Triglav dominating the scene. Here we scanned for wildlife on the lush mountain pastures descending towards Bohinj (part of the lake was visible) and spotted a pair of Golden Eagles Aquila chrysaetos, calling loudly over the valley. One of the eagles even perched for a while on a grassy outcrop, not far from where we sat. We also heard several Marmots Marmota marmota (the eagles' favourite prey) whistling their typical alarm calls, while also present in this area were birds such as Ring Ouzel Turdus torquatus, Mistle Thrush Turdus viscivorus, Alpine Chough Pyrrhocorax graculus (flock of 35), Alpine Accentor Prunella collaris, Water Pipit Anthus spinoletta, Raven Corvus corax, Black Redstart Phoenicurus ochruros and Wheathear Oenanthe oenanthe (again families with juveniles). The rocky mountain ridge is also home to Ptarmigan Lagopus muta, here interestingly sharing almost the same habitat with the Rock Partridge. While the Partridges are dependant upon grazing and the presence of cattle/sheep, Ptarmigans are linked to the rockiest and highest parts of the mountains, with very little vegetation. The Lower Bohinj Mountains represent the Ptarmigan's southern edge of distribution in Slovenia, therefore the densities here are quite low if compared to those in the interior of the Julian Alps. 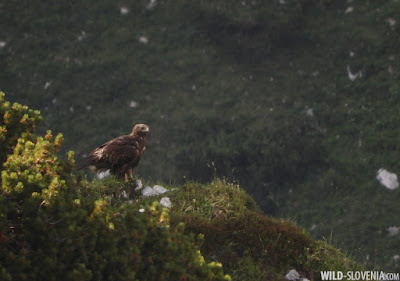 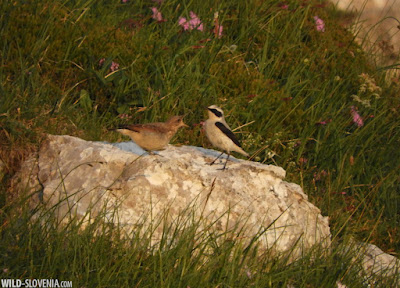 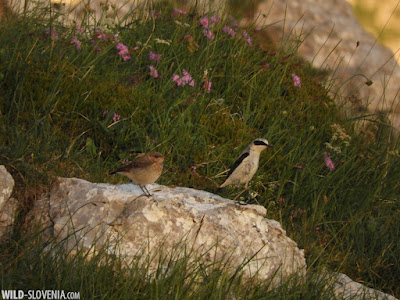 In the evening we were also treated by an interestng sighting we have already witnessed elsewhere in the Alps (more precisely on Breginjski Stol) - a Long-eared Owl Asio otus patrolling the alpine meadows around the very top of the ridge, in search of prey. As a predominantly lowland species in Slovenia, it is certainly odd to see a Long-eared Owl so high up in the mountains (at 1800 m a.s.l.). Moreover, the species is also a rare breeder in this part of Slovenia, so perhaps our sighting could involve some dispersing individual from the nearby lowland plains of Friuli, in NE Italy, where this owl is very common. The next morning at dawn, a nice group of Alpine Chamois Rupicapra rupicapra, as well as a barking male Roe Deer Capreolus capreolus and a Fox Vulpes vulpes came to say hello, before we started our descend to the valley. 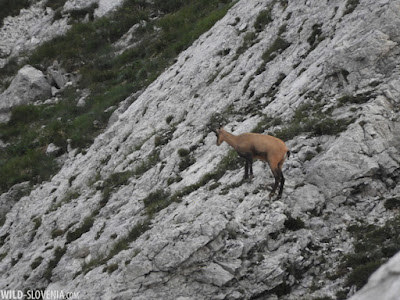 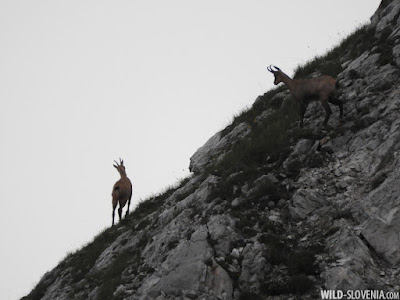