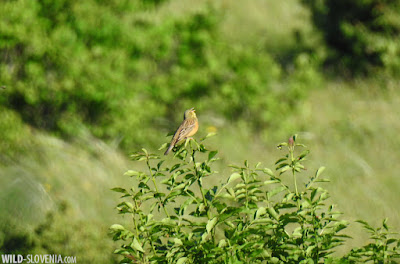 Ortolan Bunting Emberiza hortulana, one of the rarest breeding birds in Slovenia and on the very brink of extinction. This little bird, a typical inhabitant of dry limestone grasslands, has nearly vanished from its Slovenian strongholds. Only a few decades ago the species used to be common in the Karst, while in the last 15 years it went through a very steep decline. Reasons for this include a combination of factors, like habitat change, small population size and unfavourable population's dynamics. For those interested in the species and its trend in Slovenia, here is an article we wrote a few years ago, when we were studying Ortolans more intensively. DOPPS-BirdLife Slovenia still continues to monitor the population size and twice a season we also help with censuses. This week we visited the species' traditional nesting site and managed to observe two singing birds, although colleagues reported other individuals, but still, for a national total of just less than 10 individuals! However we were glad to hear its melancholic song in an area of extensive grasslands, where Ortolans used to be absent in the last few years. This observation has nothing to do with a possible re-colonisation, but rather involved an unpaired male, moving desperately over a large area, holding territory. Sadly the future of this bunting in Slovenia is really bleak. 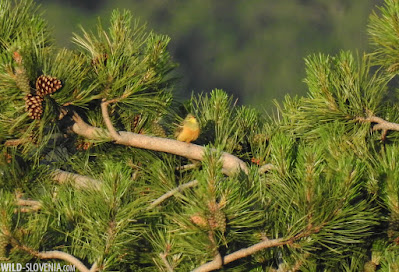 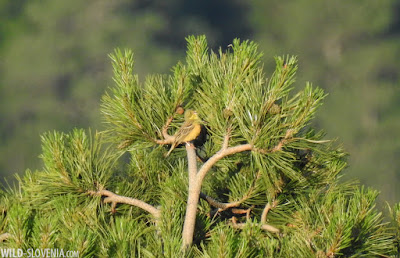 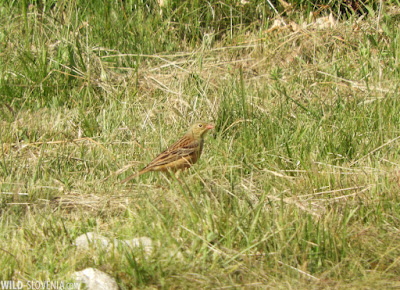 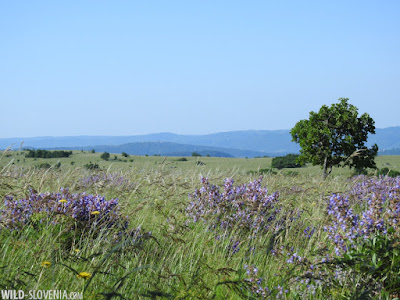 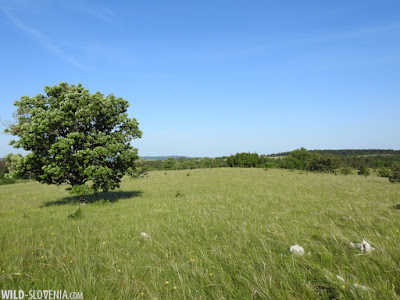 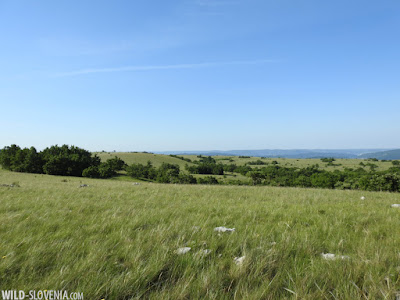 But all is not sad on the karstic grasslands. This amazingly biodiverse habitat still supports many species of interesting birds, some of which have seen a moderately positive trend in the last decade. One such bird is the charismatic Hoopoe Upupa epops, which in some areas has also benefitted from artificial nest boxes specifically put out for it. In the Karst's limestone grasslands Hoopoes usually nest in dry stone walls and only rarely in holes in trees as these are not widely available. Therefore the species will readily use nest boxes put on small oak and pine trees in the otherwise treeless countryside. Last week, during one of our grassland bird censuses we came across an occupied nest box, so a few days later, when we were again on site, we decided to wait for an hour or so in the vicinity, but still from a safety distance, in order not to interfer with the nesting. Adult Hoopoes were coming to the nest box with 10-15 minutes intervals and the chicks were already calling very loudly from inside the box. We also positioned a camera on a tripod close to the nest and left it there to record the scene non-stop, while we waited, well hidden in the distance. In 20 minutes time of recording we thus managed to film three food deliveries to the nest - the result in the video below. A quick, efficient and non-disturbing way of getting a close insight into the nesting of this attractive birds.
Hoopoe Upupa epops delivering food to the chicks (video also here).
The dry stony grasslands also support good numbers (and variety) of reptiles, which in turn support our only reptile-eating specialist - the Short-toed Eagle Circaetus gallicus. Around 10 pairs of this rare breeder are found in Slovenia, but mostly confined to the western part of the country, where optimal areas for it include all the extensive grasslands above the Karst edge. Some areas of grasslands are so optimal that they represent shared feeding territories for different pairs. One afternoon we observed three individuals together in the same area. The sunny and rather summer-like days of the recent week have "brought out" also many Honey Buzzards Pernis apivorus, a bird we now see even more often than Common Buzzards Buteo buteo, sometimes even in thermals of up to 6 individuals. Although we already mentioned some of the other typical birds of dry limestone grasslands in the previous post, we'd like to give special emphasis on this interesting community: the chorus of Skylarks Alauda arvensis, Woodlarks Lullula arborea, Quails Coturnix coturnix, Hoopoes Upupa epops, Corn Buntings Emberiza calandra, Cuckoos Cuculus canorus, Golden Orioles Oriolus oriolus, Red-backed Shrikes Lanius collurio, Turtle Doves Streptopelia turtur, Melodious Warblers Hippolais polyglotta, Nightingales Luscinia megarhynchos and Tawny Pipits Anthus campestris is really something not to be missed in June!
Posted by Domen & Sara at 06:37