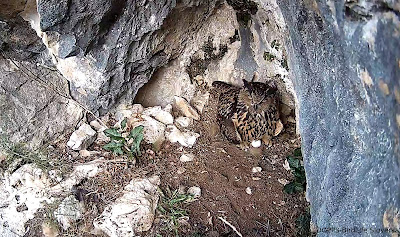 Early March is the time when the season of spring censuses begins and the traditional collective Eagle Owl monitoring represents the main opening event. Every year volunteers all around Slovenia gather to count singing Eagle OwlsBubo bubo (Europe's largest owl) simultaneously in one evening. The census is rather simple as it only involves waiting for dusk at defined spots, listening for spontaneous-calling Eagle Owls. Males sing intensively at this time of year, making them quite easy to hear and therefore confirm an occupied territory. This year we had a record of registered owls as 19 territories were confirmed in one evening (mostly in western Slovenia), among which 13 were in the Karst (the species' stronghold).

Another exciting news is that two live cameras on the nests of Eagle Owls are now streaming on this website and the entire breeding cycle can be followed on the internet! So far only the second webcam shows an occupied nest, where the female is already incubating two eggs. The first webcam, showing the nest of our local pair we've been following for the past years is also active, but the owls visit it only occasionally. For those who speak and read Slovene, we recommend checking not only the webcams, but also the other pages within the highly informative website, treating the Eagle Owl's status, biology and conservation in Slovenia:

In the past few weeks we've spent several evenings listening to Eagle Owls in the Karst around our home. On one occasion we also made a fantastic daytime encounter with an owl, roosting at its favoured little cave in a cliff face. The distance from the bird was considerable and although the bird had initially seen us, it acted pretty relaxed and soon carried on with its daytime napping. 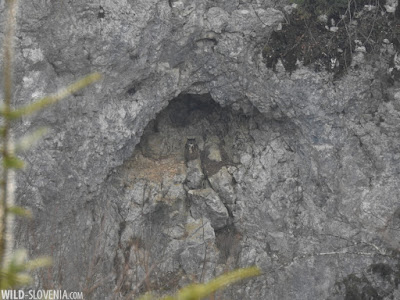 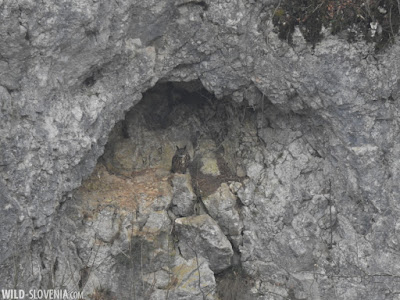 In the Karst and other parts of western Slovenia we are currently carrying out the census of Middle Spotted Woodpecker Leiopicus medius. Some transects were pretty productive with up to 11 Middle Spots counted, while others had disappointingly few individuals. Some areas we censused back in 2018 and 2019 have been completely transformed by logging and don't support woodpeckers anymore. Actually in recent times, wherever we visit Slovenian forests (be in the Karst or the Dinaric mountains) we find ourselves deeply saddened by the sight of heavy logging and the omnipresent sound of chainsaws... 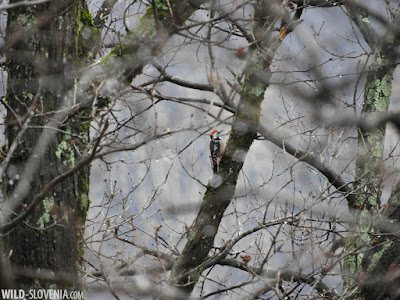 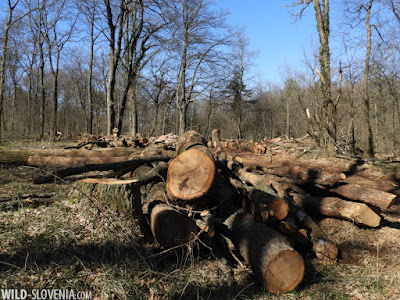 Fortunately there's still some forest wildlife cheering us up during every census including countless Grey-headed Picus canus, Black Dryocopus martius and Lesser Spotted Woodpeckers Dryobates minor, Short-toed Certhia brachydactyla & Common Treecreepers Certhia familiaris, Hawfinches Coccothraustes coccothraustes and a dawn chorus of Song Turdus philomelos & Mistle Thrushes Turdus viscivorus. Although Wild Boars Sus scrofa are considered a big nuisance because of the damage they do on crops (but also on meadow & forest wildflowers), it's still nice to sometimes encounter these animals while walking in the forest. Yesterday we came across a large group of around 20 animals that included at least 10 newly born piglets. 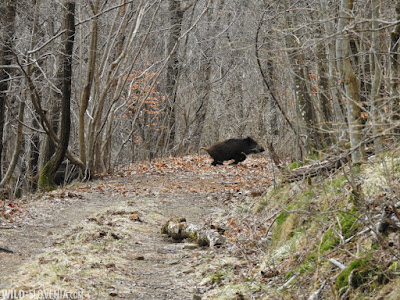 Early March is also the time when amphibians emerge and head to water bodies to mate and deposit their eggs. Even the smaller ponds in the forest attract a great number of frogs and recently we came across several frogspawns. Most were the single and spherical clusters of the common Agile Frog Rana dalmatina, a widespread species in the warmer parts of Slovenia, while apparently Common Toads Bufo bufo haven't started to breed yet. On the other hand yesterday, in the Brkini hills we witnessed an incredible assembly of Common Frogs Rana temporaria, whose spawns are not laid singly like those of the Agile Frog, but in large clusters floating on the water. We counted around 20 adults in amplexus, floating among the freshly-laid eggs. A truly beautiful spring spectacle.

At this time of year, in the flysch hills bordering the Karst, which are rich in surface water (unlike the karstic limestone) is is not difficult to encounter Fire Salamanders Salamandra salamandra, especially in proximity of small water bodies in the forest. Wildflowers are also in full bloom on the wet soils of the cooler wooded hills or karstic dolinas and among them the Dog's-tooth Violet Erythronium dens-canis certainly steals the show. 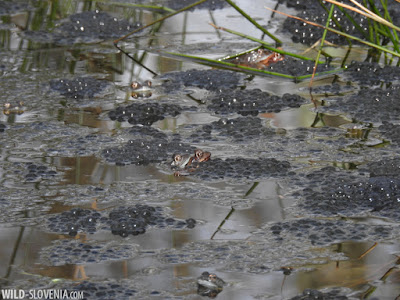 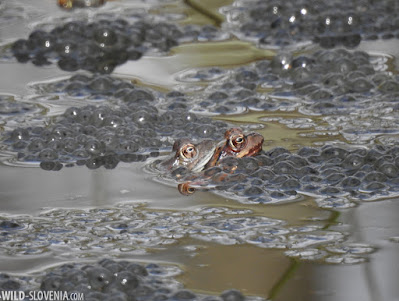 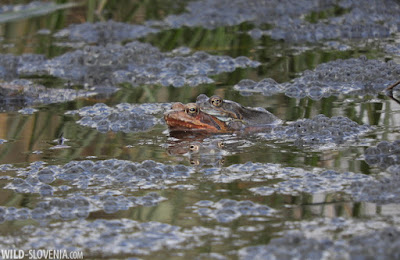 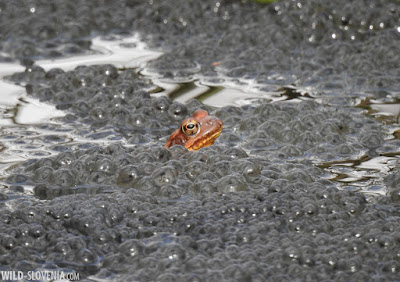 Concerning the spring bird migration, occasional flocks of Common Cranes Grus grus are still passing overhead through western Slovenia and on the 7th we were again lucky to spot a distant flock above our house. Meanwhile in Škocjanski zatok even the first true summer migrants have appeared: on the 12th we observed a lone House Martin Delichon urbicum, 4 Alpine Swifts Apus melba and 4 Black-winged Stilts Himantopus himantopus. More to come in the following weeks...