Let there be water in the karst 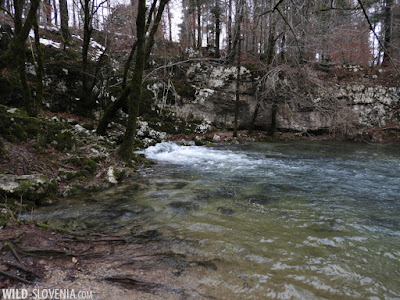 The karst's most basic characteristic is its limestone composition and thus the near-absence of surface water. The latter is actually present, but mostly invisible, stored in the form of groundwater in caves and underground rivers. However in certain seasons, when heavy rainfalls concentrate over a short period of time (usually in a few days), the underground reservoirs are quickly filled and water spills on the surface. Sinkholes that usually absorb water, transfrom into violent springs, while dry poljes (karstic floodplains) turn into lakes. Lake Cerknica is the most classical example of this phenomenon, but there are many others all over the central and western part of Slovenia, where limestone is the main type of bedrock. The Notranjska region is particularly rich in karstic phenomena, especially those involving "flood water", while the "Classical Karst" region to the west (the one which we write with a capital "K", to emphasize the name of the place) remains mostly dry. Like (almost) every autumn, in the past two weeks we experienced heavy rainfalls that brought a considerable amount of water to the karstic landscape. As wildlife is really thin on the ground at this time of year, we sometimes like to go out looking for interesting physical features of the natural world, especially so because we have them all around us in the Karst where we live.

Over the weekend we payed a short visit to lake Cerknica which was quite full of water, but held few birds. Wildfowl numbers were quite low, however we managed to spot the "usual" White-tailed Eagle Haliaeetus albicilla, an adult perched distantly in the middle of the lake. Several winter species like Great Grey Shrike Lanius excubitor and Hen Harrier Circus cyaneus (two males) were around, but what made our day was a large flock of 250-300 Fieldfares Turdus pilaris feeding in a field by a village. We also had Goshawk Accipiter gentilis, Redwing Turdus iliacus and a large flock of Hawfinches Coccothraustes coccothraustes. 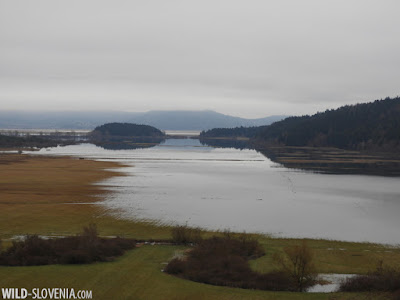 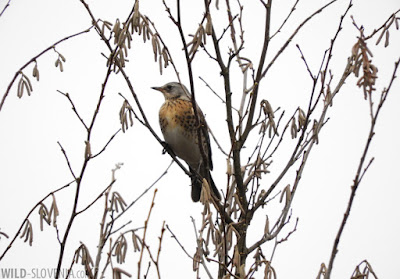 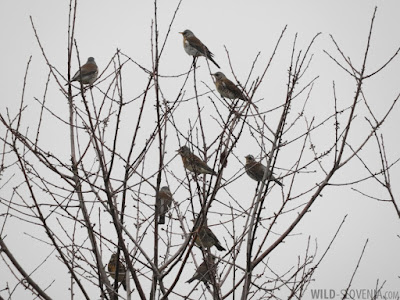 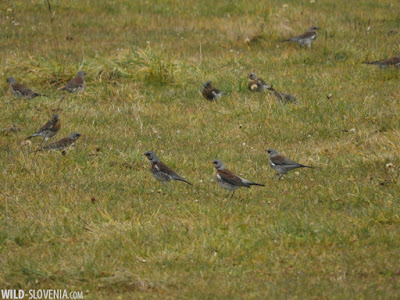 Given the circumstances we also checked the water levels at nearby Rakov Škocjan and Planina cave, that represent the natural continuation of the waters flowing out from lake Cerknica. The rivers Rak and Unica gave us some inspiration to record a little video (below is the result). The only bird of note was a Dipper Cinclus cinclus on the river Unica, as usual coping very well with the high water table. The violent karstic springs such as those at Rakov Škocjan (but especially those of the river Pivka) are sometimes so strong that they bring to the surface underground dwellers like the mysterious Olm Proteus anguinus, the charismatic cave-salamander, endemic to the karst around the Adriatic (see here).

Although as we mentioned above, the "Classical Karst" where we live is much drier even in rainy times (water persists only deep down in the caves), there are still some places where the limestone rock gives way to sandstone (flysch), creating steep valleys with small temporary and permanent streams. The Kranjšek stream near Sežana is a nice example. In the past there used to be several mills along its relatively short course. The valley is now abandoned and mostly overgrown with spontaneous vegetation, including ferns of all sorts. The several small, but scenic waterfalls are adorned by fallen and rotting trees creating natural dams. A little corner of karstic wilderness. Here too we took the chance to record a few waterfalls and make a small video (watch below). The surrouding oak forests, which we visited several times in the last two weeks, provided multiple encounters with Middle Spotted Woodpeckers Dendrocopos medius, an ever increasing species in mature karstic woodlands, as well as a nice Woodcock Scolopax rusticola. The oak trees at this time of the year are also adorned by the incredibly beautiful golden fruits of the Yellow-berried Mistletoe Loranthus europaeus - one of the few touches of colour in the grey winter landscape. 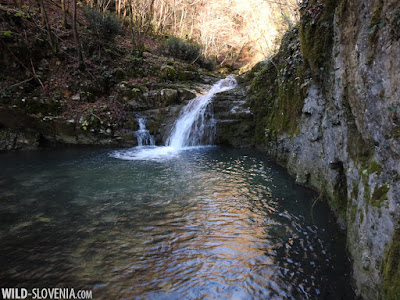 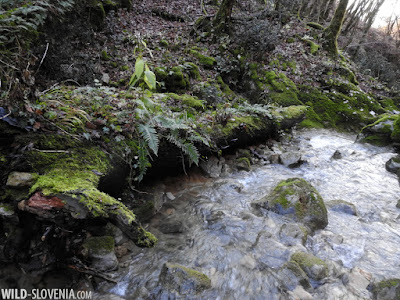