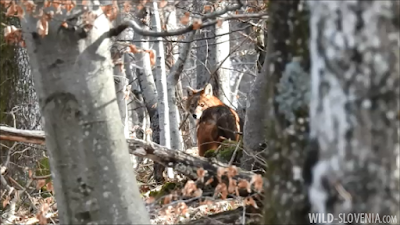 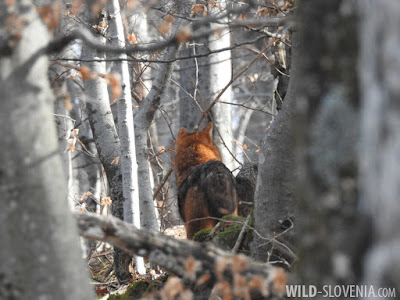 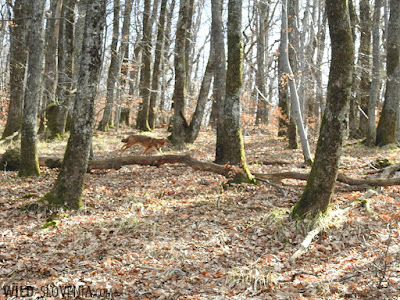 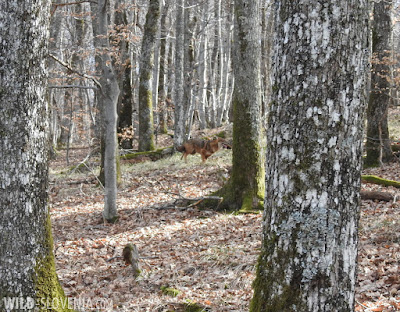 Yesterday morning we went tracking woodpeckers (up to 6 different species) in a forest in the Karst, like we usually do at this time of year. After a productive morning with all 6 species recorded (all European woodpeckers apart from White-backed, Three-toed, Syrian and Wryneck), we were treated with a rare and unexpected encounter. Just around 11 o'clock, we were standing still and silent by some trees, when a mid-sized animal trotted in our direction. First thought was "a fox", but as the animal approached we realised it was a beautiful Golden Jackal Canis aureus. The animal didn't notice us at all and walked straight in our direction, passing some 15 meters away from us. When it disappeared among the trees, half a minute later, another three Jackals followed in the same direction, silently trotting towards us! This time the group spotted us and decided to change direction, but first the animals chased one another for a while, not far from where we were standing. In the excitement we managed to take a copule of shots and record the above video, showing the last two Jackals of the group, a few moments before they disappeared into the trees, never to be seen again. Although we were used to see quite a lot of Jackals on a daily basis in Romania (see here), watching these interesting animals here at home is certainly different. Golden Jackals have been colonising Slovenia from the Balkans in recent years and in many areas they've become permanent residents. The Karst in western Slovenia is perhaps one of the places with the largest population, but still, seeing these animals is far from easy. The animals here tend to be rather shy and active mainly at night. Hearing their howls is usually the commonest type of encounter with the species. In the past we already heard Jackals howling in the Karst a couple of times and even caught one on a trail camera, actually not far from where we saw them yesterday.
More up-to-date info about Golden Jackals in Slovenia can be found on this website, summarising the results from the latest studies of the species. The site is only in Slovene, but the graphs and tables should be readable nevertheless. This page in particular is interesting as it shows the approximate distribution of the species in Slovenia. 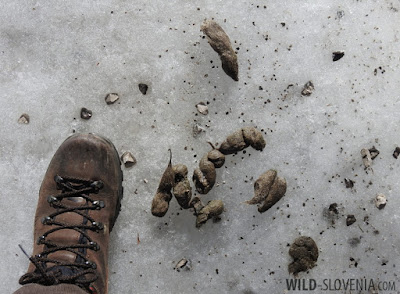 It is said that areas inhabited by Golden Jackals are not inhabited by Wolves Canis lupus as the two species exclude each other. That is true also for Slovenia as the Jackals usually inhabit lowland and hilly countryside, while Wolves have territories in mountain forests of the Dinaric chain. The Trnovo forest (Trnovski gozd) in western Slovenia is home to a well-studied pack of Wolves (see this informative video) and finding their tracks in not that difficult in winter. At the beginning of the week we visited the forest, once again with the main aim of tracking down some rare woodpeckers (White-backed in particular), but without success. However, during our long walk in the snow, we stumbled upon two droppings of Wolf Canis lupus (above), on the main road running through the forest. Wolves frequently use forest roads as they are quite convenient to walk on and their tracks can be sometimes found quite easily on such exposed places. 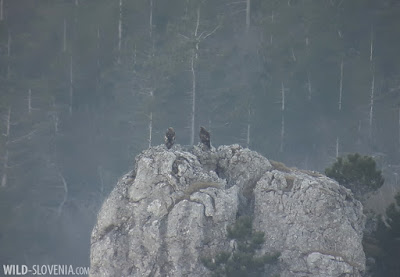 Descending from the plateau of Trnovski gozd, we scanned some cliffs at its southern edge and spotted the local pair of Golden Eagles Aquila chrysaetos, perched on the top of a large rock. Nearby we also checked a nest-site that was used in the past and noticed some new building material in it (fresh pine branches), so fingers crossed that the pair will nest there again!