The search for the Apollo 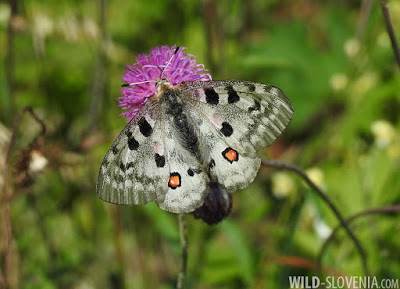 The Apollo Parnassius apollo is certainly one of the most beautiful butterflies in Europe, but sadly also a fast-declining one. Due to its beauty, it has always been a highly-prized species among collectors. However the main reason of the species' decline remains, as for many other species, habitat loss. Apollos live in warm and dry rocky grasslands, usually on mountain slopes. The habitat must contain a particular element - the presence of White Stonecrop Sedum album - the larval feeding plant. The abandonment of grazing in many areas throughout the Slovenian mountains has led to the overgrowing of grasslands and areas where the feeding plant grows. Thus, a once-widespread species all over the Slovenian Alps, the Apollo went extinct in many areas and today it can be found only in western Slovenia. Its main strongholds remain on the steep south-facing mountains above the Soča valley in NW Slovenia and on the southern edge of the Trnovo forest (Trnovski gozd). The latter is a disjuncted location from the rest of its Alpine range and is particularly vulnerable to habitat loss and consequently local extinction.
In the past years we had several encounters with the Apollo in the Julian Alps, but since then, we always wanted to see them closer to home, in the meadows of Trnovski gozd. A few days ago we set for a trip to the forest's southern edge, where rocky grasslands are alive with butterflies and colourful mountain flowers. 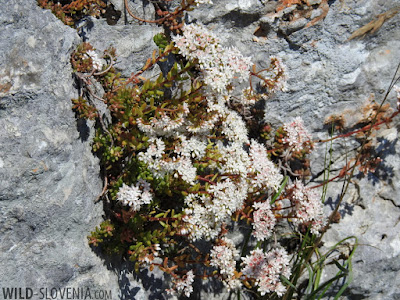 After a quite productive morning with lots of interesting butterflies, we finally stumbled into the first patch of White Stonecrop Sedum album. A few more steps along the limestone karstic edge and we were soon greeted by no less than three Apollos, dancing in the soft summer wind and occasionally perching to feed... 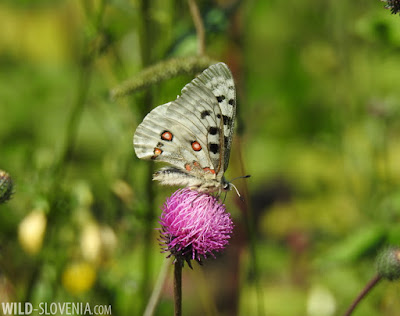 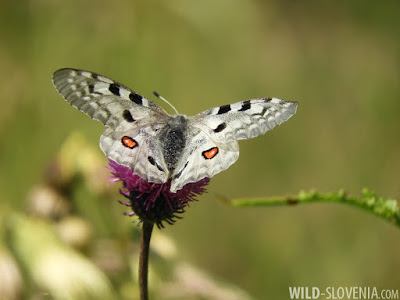 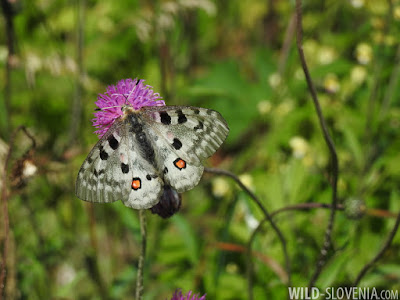 The adult's favourite feeding plants are different purple and pink-coloured Compositae, especially thistles Carduus sp. and plume thistles Cirsium sp., but also scabious Scabiosa sp. Our Apollos were most frequently feeding on Alpine Thistle Carduus defloratus. They were showing amazingly well and with a bit of patience we could have them feeding at a few centimeters away from our cameras. This also allowed to take the above short video. On their rocky slope, where the stonecrop abunded, we counted at least 7 specimen! 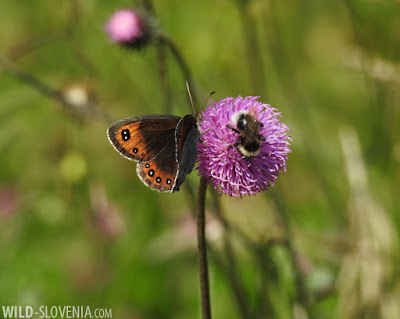 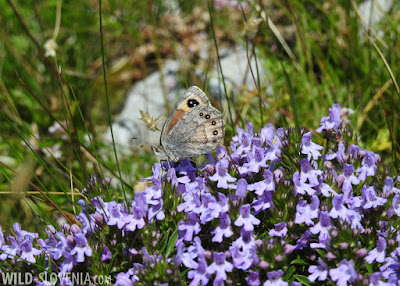 Making company to the Apollo (sometimes feeding on the same flower) were also a few Styrian Ringlets Erebia stirius. These interesting butterflies are widespread in the Slovenian Alps, but only found at a few sites outside of the alpine chain. One of these sites is the southern edge of Trnovski gozd and mount Nanos, where they inhabit rocky slopes, screes and limestone cliffs. The specimen in the lower picture above is feeding on this year's first flowering Liburnian Savory Satureja subspicata ssp. liburnica (an autumnal species). 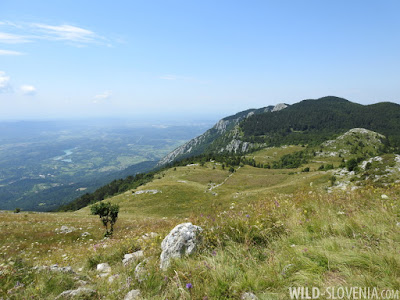 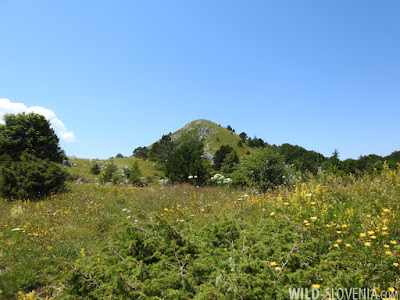 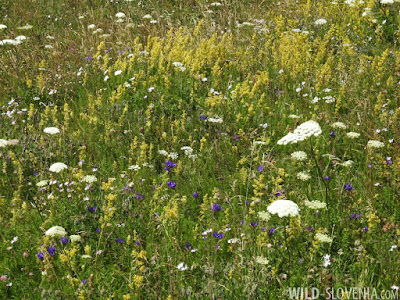 The dry rocky grasslands at the edge of Trnovski gozd are extremely rich in plant & butterfly species. The meadows are completely covered in flowers from the end of April to the beginning of September and many species seem to be constantly in flower throughout the summer. 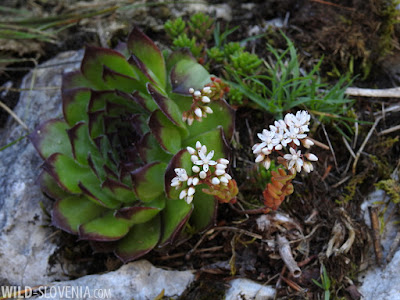 In the rockier places White Stonecrop Sedum album and other species of the same genus are accompanied by the succulent rosettes of Common Houseleek Sempervivum tectorum. 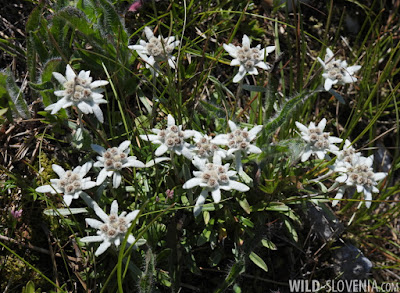 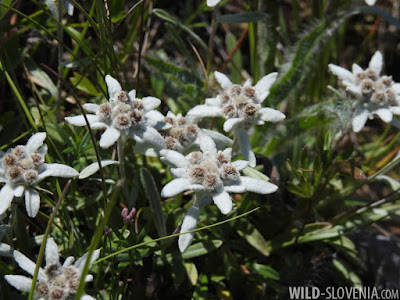 Here and there, in the mountain meadows of Trnovski gozd one can still find some Edelweiss Leontopodium alpinum adorning the rocks. This species is one of the several alpine ones found in Trnovski gozd, outside their usual alpine distribution range (ice age relicts). Edelweiss was commoner in the past in Trnovski gozd, but due to uncontrolled collecting and habitat loss (overgrowing meadows), it has become quite rare and localised. It is thus, always a pleasure to find some nice bunches like the above, in hidden places, off the usual mountaineering tracks. 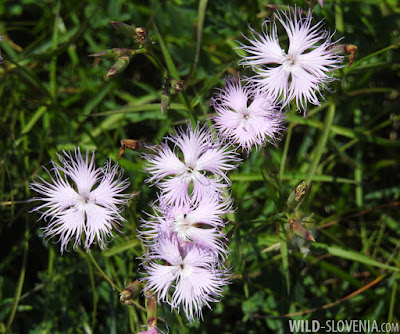 The meadows are also full of two species of pink, the more attractive being the fringed Montpellier's Pink Dianthus monspessulanus (or D. hyssopifolius), which resembles the high-altitude, alpine Sternberg's Pink Dianthus sternbergii (not found outside the Alps). The other abundant pink on dry karstic meadows is the Trieste's Pink Dianthus tergestinus (or D. sylvestris ssp. tergestinus) which sports a deep-pink colour of the petals. 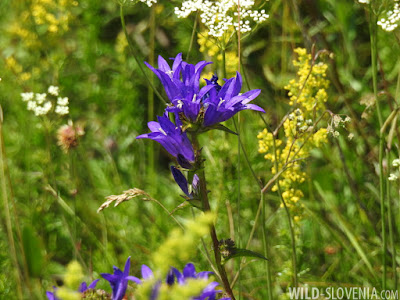 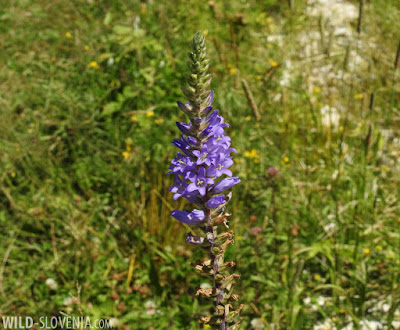 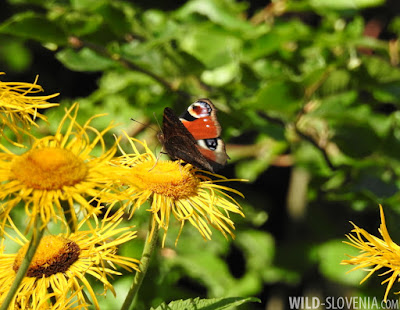 In the Trnovo forest itself, butterflies are especially attracted to the flowers on forest glades or along roads. The above Peacock Aglais io was feeding on Heartleaf Oxeye Telekia speciosa, a common forest Compositae in the Dinaric mountains. 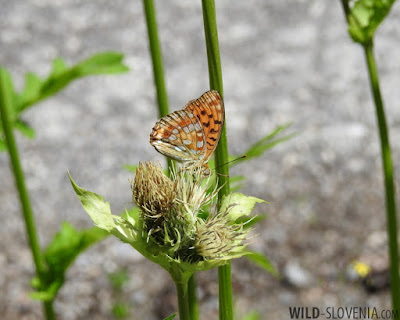 The above High Brown Fritillary Argynnis adippe was instead attracted to a Cabbage Thistle Cirsium oleraceum growing at the side of the forest road. 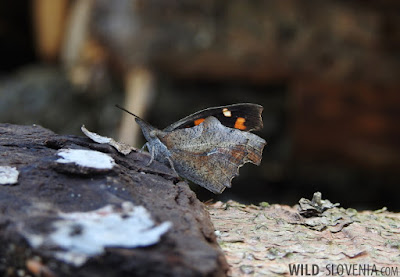 Perhaps the most surprising find of the day was the above Nettle-tree Butterfly Libythea celtis, that visited some puddles in a forest glade. This south European species is most at home in warm Mediterranean places, where its larval plant, Nettle Tree Celtis australis grows. In Slovenia it is common in the sub-Mediterranean west of the country and probably some individuals venture into the Trnovo forest from the warm Vipava valley. 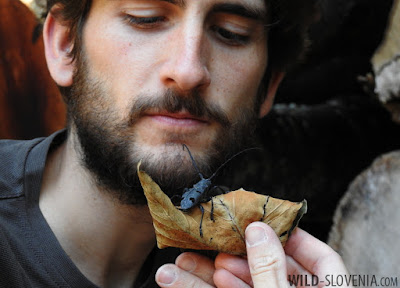 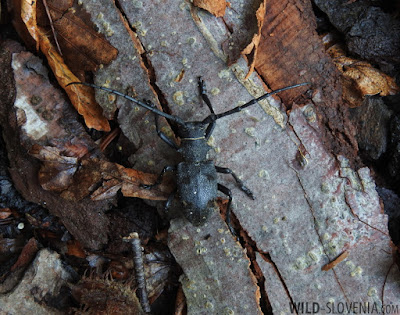 Last but not least, while checking some wood piles at the side of the road, we found several Beech Longhorn Beetles Morimus funereus, including a very dark individual. In summer we regularly check all the fresh beech logs we see, in the hope of finding the rare Rosalia Longicorn Rosalia alpina. We really hope that we'll be able to show you this amazing species in one of the next posts!