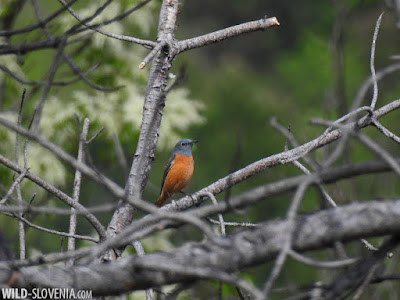 In the past ten days or so our fieldwork went on with the usual spring tempo. This is certainly the busiest (but also the most exciting) time of year for us naturalists. Again most of our time was spent in the Karst. One particularly interesting habitat at this time of year is the Karst edge (Kraški rob) - the large limestone edge of the Karst's plateau that extends in a NW-SE direction from Trieste in northeast Italy, down through SW Slovenia and into NW Croatia. The limestone cliffs and dry stony grasslands between Osp and Rakitovec represent some of the most interesting and biodiverse habitats for wildlife in the whole of Slovenia. Peregrine Falcon Falco peregrinus (along with Eagle Owl Bubo bubo) is a typical inhabitant of the limestone cliffs. This year a pair decided to nest in a cliff that is usually teeming with rock climbers, but now very quiet due to the recent lockdown. However in the last days restrictive measures in Slovenia have being loosened and a larger influx of rock climbers is again expected on the cliff. Therefore we contacted the local authorities and made sure that the portion of the cliff where the falcons breed will (hopefully) stay off limits for climbers. The Peregrines are otherwise very noisy and easily watched from a safety distance - we even witnesses a prey exchange, when the male brought a dead bird to the female. 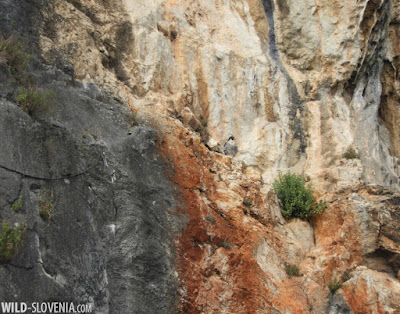 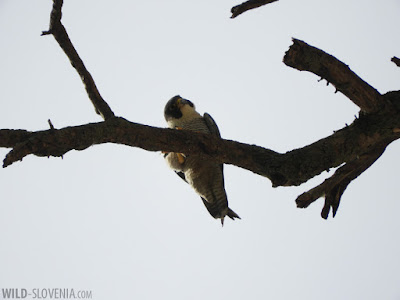 On and around the Karst edge we observed several other typical birds of this habitat like Blue Rock Thrush Monticola solitarius, Rock Bunting Emberiza cia, Alpine Swift Apus melba, as well as Short-toed Eagle Circaetus gallicus hunting over the grasslands. However we were most excited when we spotted a stunning male Rock Thrush Monticola saxatilis singing in an area of rocky pastures above the Karst edge. This is a quite rare breeding bird in Slovenia, restricted to rocky and sunny grasslands in the west of the country. Its main strongholds are the south-facing slopes in the western Julian Alps, while smaller numbers are also found on higher-lying karstic grasslands in south-western Slovenia. It was an excellent and unexpected find. 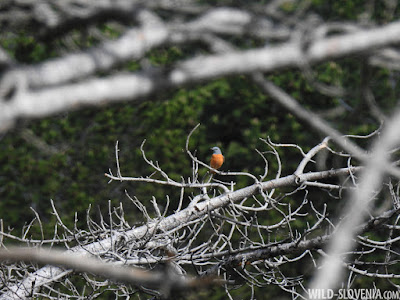 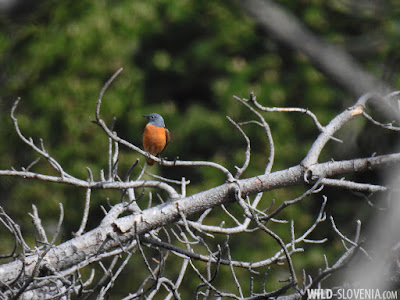 Some dry meadows on the Karst edge are well-known hotspots for plant & butterfly diversity. On one of these we came across several species of orchids including the rare Ophrys sulcata which we've never seen before, as well as commoner ones like the impressive Lady Orchid Orchis purpurea and the common Three-toothed Orchid Neotinea tridentata. However we've been noticing that this year's prolonged droughts are having a bad impact on orchids (and plants in general) as the blooms are really unimpressive and probably many specimen don't flower at all. In some limestone cliffs the endemic Tommasini's Sandwort Moehringia tommasinii is in full bloom at the moment. This plant can only be found along the Karst edge, at a handful of sites between the Glinščica valley near Trieste and Istarske toplice in Croatia. 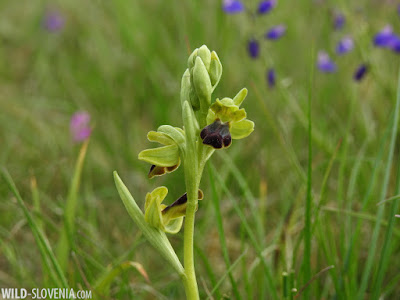 Meanwhile in the Karst around Sežana we are still following our local pair/s of Short-toed Eagles Circaetus gallicus. We discovered that apparently what we thought to be the breeding territory of one pair is actually a contact area between at least two pairs. We keep observing up to 4 adult Short-toed Eagles circling together, giving loud contact calls and displaying, which certainly suggests some aggressive territorial behaviour. The wider area of the Karst around Sežana and Divača could easily host 3-4 pairs of this rare breeding bird. In the video below a bird showed very well while hunting over a meadow in its typical "hanging" flight. 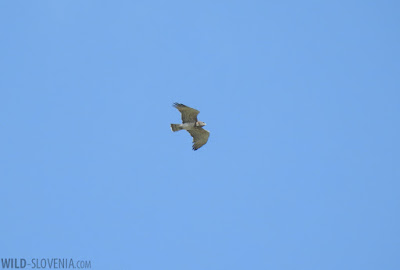 
To our delight Common Redstarts Phoenicurus phoenicurus have returned to the villages of the Karst and we even have a singing male at ear's reach from our garden. This beautiful little bird used to be rather localised as a breeder in the Karst until some years ago. Now almost every village in the Karst has a breeding pair, including the town of Sežana. In some places the species seems to be competing with and excluding the far commoner Black Redstart Phoenicurus ochruros. 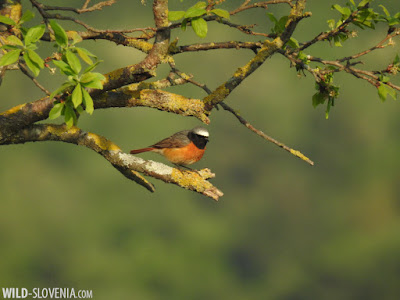 Some months ago we've been told that an odd swallow's nest with a tunnel was found under a concrete bridge near Divača. The tunnel and the unusual location indicated a Red-rumped Swallow's nest. A few weeks ago we inspected the site and found last year's old nest, which was semi-destroyed. Then we returned to the place some days ago and noticed that the nest has been magically repaired... and a pair of Red-rumped Swallows Cecropis daurica flew out from it! This species is a very rare breeder in Slovenia, with its few known breeding sites in the Slovenian Istria, close to the border with Croatia. Therefore the nesting site near Divača represents a new site for this Mediterranean species in Slovenia.

Butterfly activity is also increasing and with it the species' variety. Last week we had a rather good "royal duo" in the garden: Queen of Spain Fritillary Issoria lathonia and Duke of Burgundy Hamearis lucina on the same day. In the karstic meadows we've been noticing still some late Southern Festoons Zerynthia polyxena and the occasional Nettle-tree Butterfly Libythea celtis, while new additions for the year included Glanville Fritillary Melitaea cinxia and Pearly Heath Coenonympha arcania. The large and distinctive Beech Longhorn Beetles Morimus funereus have also emerged and are already to be found on oak and beech logs in deciduous forests.

And now a change of habitat. Last Monday we carried out the second census of Three-toed Woodpecker Picoides tridactylus in the Javorniki mountains (first census here). This time we recorded only 2 Three-toed Woodpeckers of which we managed to see none! The birds weren't very responsive and when they drummed/called they kept well hidden. All we managed to record is the short video below, where you can at least hear the drumming. However on one point we had a surprise: after playing the playback we got immediate response by a very angry woodpecker that landed like a missile on a tree nearby. But it was no Three-toed - it was a female White-backed Woodpecker Dendrocopos leucotos, another very rare woodpecker of these forests. It didn't prove too cooperative either and we only had a brief glimpse of it, although it kept drumming and calling loudly. During the census in the Dinaric forests we also heard a male Ural Owl Strix uralensis singing in the early morning and the usual mountain forest bird-mix.

Later the same day we visited a site in the Notranjska where the endemic Carniolan Primrose Primula carniolica grows. This species is one of the very few truly endemic plants of Slovenia, meaning they only grow within Slovenia and nowhere else in the world. The Carniolan Primrose is mostly found in the Dinaric mountains of central and western Slovenia, growing on wet north-facing cliffs in forest habitats. 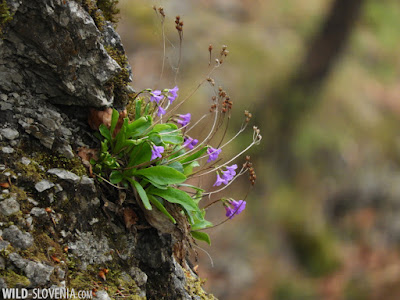