October in the Dinarides & the Karst 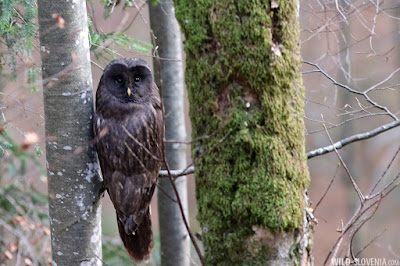 October is the best autumn month in terms of birdlife activity in the Dinaric forests. In the beginning of the month, the leaves of beech Fagus sylvatica (the predominant tree species here) turn orange and this spectacle is something we never want to miss. Despite visiting the forests on mounts Snežnik and Javorniki on a regular basis, it's not always easy to predict the best moment with the greatest intensity of colours. This can vary from year to year (also according to weather conditions) and this season everything seemed to happen quite briefly. We were lucky to choose (only) one right day when autumn colours were at their very best in the forests above 1300 m a.s.l. (pics below). Later visits still resulted in nice orange-yellow colours, but not as much as those of the first days of October. Although on different occasions we searched for White-backed Woodpecker Dendrocopos leucotos lilfordi in the old-growth beech forests, we were "only" rewarded with two observations of Three-toed Woodpecker Picoides tridatclyus. We found one in a typical high-karst dolina within an isolated stand of Norway spruce Picea abies, while the other was feeding on some conifers in a predominant commercial beech forest, at a rather unlikely location. Autumn is the time of "floaters", so woodpeckers can sometimes turn up in more unusual places. 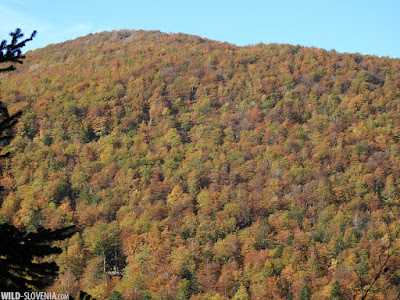 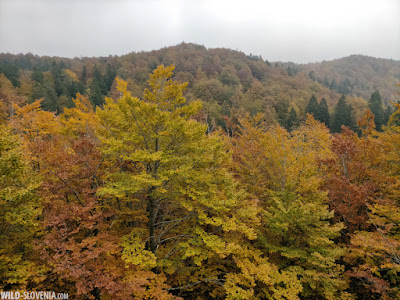 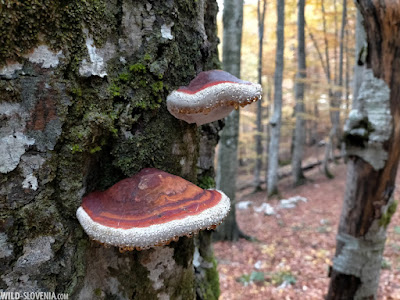 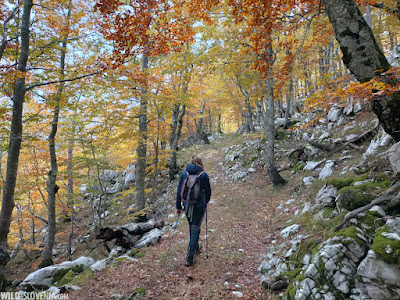 During our recent visits to the forests of Snežnik & Javorniki we had the opportunity to watch Ural Owls Strix uralensis (the commonest avian predator in these forests) several times. One such encounter represented the icing on the cake after a day's guiding around lake Cerknica and the Karst. After having enjoyed great scope views of Middle Spotted Leiopicus medius, Grey-headed Picus canus & Black Woodpecker Dryocopus martius, White-tailed Eagle Haliaeetus albicilla, Merlin Falco columbarius and Red-rumped Swallow Cecropis daurica, our British guest was treated with amazing views of a pair of Ural Owls, sat together in the same field of view - something we've never seen before! 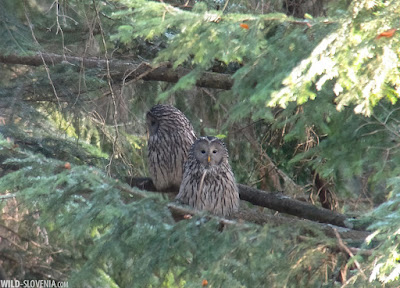 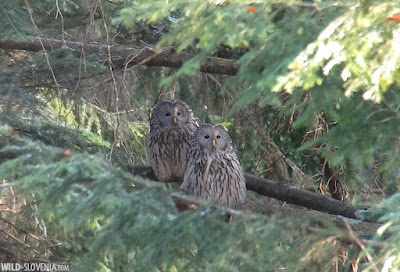 Remaining on the same subject and habitat, more recently we also visited the forests of Kočevje, on the hunt for the rare "chocolate" (melanistic) Ural Owls that inhabit Slovenia. Actually this dark morph makes up 5-15% of the Slovenian Ural Owl population (more info here). Although we see lots of "normal" Ural Owls every year, we mostly find them in the forests of Snežnik, Javorniki, Trnovski gozd and the Karst, where the dark morph is very rare. Somehow dark Ural Owls can be found with more ease in the forests of Kočevje and surrounding regions in southern Slovenia. A friend had the dream of seeing one of these dark ghosts since a long time, so taking advantage of a fine autumn day and the absence of leaves in the canopies, we finally set for the quest. For most of the day we didn't see anything particular, apart from one grey-morph Ural Owl, but then in the evening our luck struck. While driving slowly on a forest road, we spotted a melanistic owl perched on a low branch, some 20 metres away from the car. We could only take a few record shots (below) before the owl took off and glided into some thick conifer stand. We followed the bird for a while, seeing it only in flight for a couple more times. Later on, as dusk descended another two Ural Owls were spotted along the same road, both in hunting mode. We even watched one catching a rodent in the middle of the road in front of our car - the perfect rounding up of a very successful day! Here's a short video featuring two of the 4 Ural Owls seen, filmed on site by our friend Kajetan Kravos who was with us. 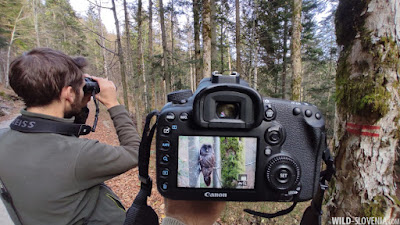 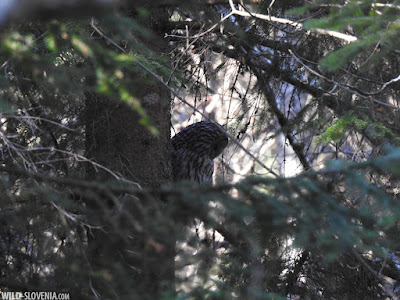 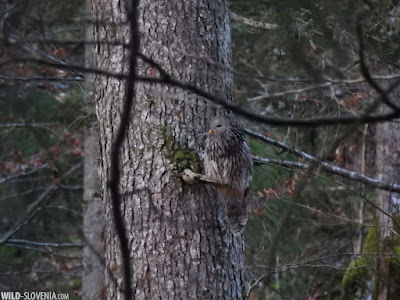 Strolling around Dinaric forests in recent weeks we also came across several interesting signs of Brown Bear Ursus arctos (although we haven't been lucky to see the animal itself, "making" this signs, like back in October 2020). Bears looking for food in autumn do a quite extensive "mess" which is clearly visible in the field. Most of the time it's the result of turning large rocks or digging into rotten stumps or logs. This time we came across a fine example of de-barking of a dead beech and climbing onto some apple trees on a forest glade. However one of the most frequent signs of Bear's presence in these forests is their droppings that can be commonly found on gravel roads. 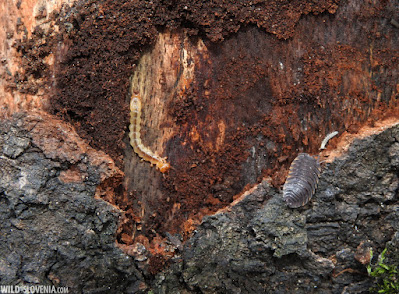 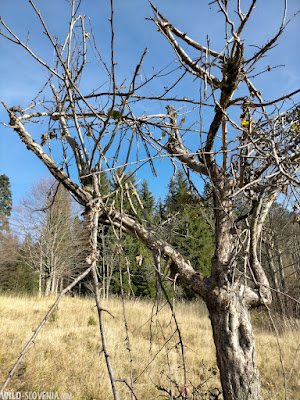 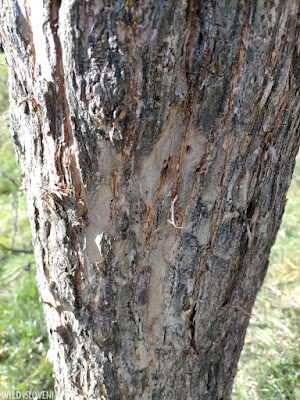 When we didn't have the time for more extensive day trips to the Dinaric forests, we made good use of the oak woodlands close to our home in the Karst. Our low-carbon late afternoons after work have been very satisfying recently as we managed to find Middle Spotted Leiopicus medius, Black Dryocopus martius and Grey-headed Woodpecker Picus canus all in the woodland behind the house. Other good local sightings included some seasonal (migrant) Redwings Turdus iliacus and Woodcocks Scolopax rusticola. But even when birds where thin on the ground, it was always nice to wander the woods in search of fungi - the season has been simply incredible in terms of abundance and species variety! 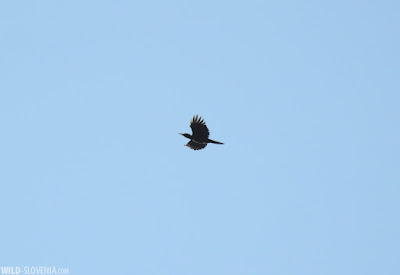 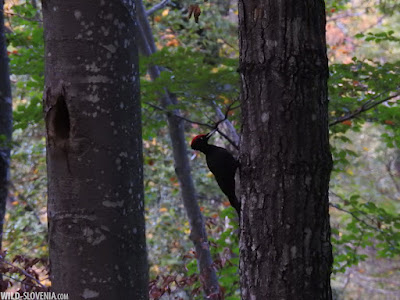 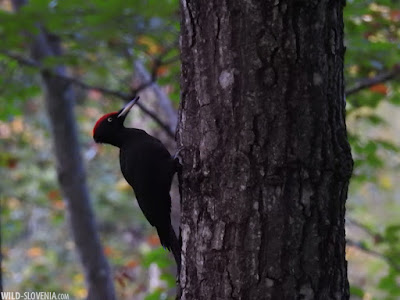 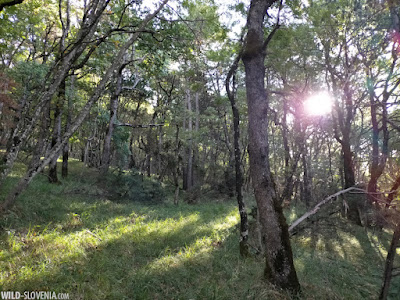 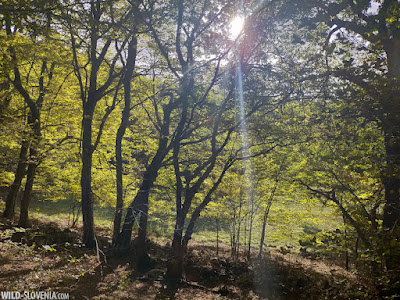 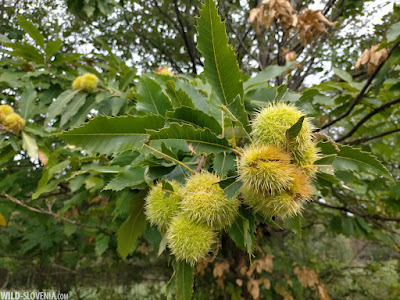 Remaining in the Karst, a quite interesting news on the birding front was finding a new nest of Red-rumped Swallow Cecropis daurica under a concrete bridge near Divača. We were actually already aware of the breeding of this rare Mediterranean species in the area (since 2020), however this year we discovered a new location nearby with multiple nests, presumably all belonging to one pair. In the first ten days of October we were still regularly seeing a pair of Red-rumped Swallows, when driving on our way to work. One day we checked the location properly and apart from observing two adult birds, we also found their nest/s. There were at least two nests under a concrete bridge, a few hundred metres away from the location we knew from 2020. We couldn't confirm if there were any chicks in the nest (possible for the species at this time of year), but the adults didn't seem to be in breeding mode anymore. Last time we saw the two adults was on the 11th of October, a quite late record for the species. After that they must have departed for Africa as most of the other hirundines. Red-rumped Swallow is a rare and localised breeder in Slovenia, mostly confined to the Istria region and parts of the warmer Karst, close to the border with Croatia. The site near Divača thus represents the species' most disjunct and northernmost breeding location in Slovenia. However it is possible that other breeding Red-rumped Swallows have remained undiscovered in the Karst or in the wider submediterranean region of Slovenia.

In early October some typical winter birds appear in the Karst and announce the imminent arrival of the cold season. One such example is the Wallcreeper Tichodroma muraria, a much sought-after bird for foreigners visiting Slovenia. While in summer it is rather difficult to observe in its breeding habitat in the Alps, in winter everything changes. Wallcreepers undergo an altitudinal migration and many turn up on more accessible limestone cliffs in the Karst, where they spend the winter. Our closest Wallcreeper site to where we live is some 15 minutes drive away, in the cliffs at Škocjanske jame (Škocjan caves), a site we check on a regular basis. This year we saw our first Wallcreeper on the 15th of October - it was dust-bathing on a cliff ledge (see pics below). At Škocjanske jame we were also surprised (but not too much, after all) to hear two different Middle Spotted Woodpeckers Leiopicus medius in an area where the species was probably not recorded before (although expected, given its recent range expansion).

Another winter bird is the Great Grey Shrikes Lanius excubitor. Although we usually see the first one of the season at Škocjanski zatok Nature Reserve on the coast (29th of September this year), the Karst also holds several winter territories in areas of open medows or farmland. Great Grey Shrike is (along with a very few other birds) one of the highlights of winter birding in the Karst! 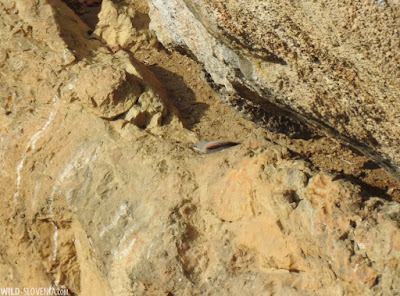 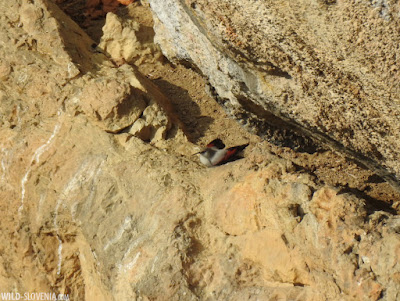 We'll round up this blog with some more recent sightings from the beginning of November. Sadly the days are getting shorter and during the past weekend we were hit by the first spell of cold. Despite some unfavourable northeasterly wind, we visited lake Cerknica, hoping to catch up with some migrating Common Cranes Grus grus that will be soon passing in large numbers over the country. Although we were successfull with only hearing a migrating flock (but not seeing them), the birding on and around the (now almost dry) intermittent lake was quite good. Apart from one of the local White-tailed Eagles Haliaeetus albicilla (which are always nice to see), we also saw some typical winter birds such as Goldeneye Bucephala clangula (1 female), Hen Harrier Circus cyaneus (male & female), Great Grey Shrike, as well as a nice flock of +40 Wigeon Mareca penelope and several Teal Anas crecca. Quite unusual for this area, in this season was a late (overwintering?) White Stork Ciconia ciconia, while other raptors included Peregrine Falco peregrinus, a possible Merlin Falco columbarius and a male Marsh Harrier Circus aeruginosus. On the nearby river Unica at Planinsko polje we enjoyed a pair of Dippers Cinclus cinlus, 2 Kingfishers Alcedo atthis, several Grey Wagtails Motacilla cinerea and Black Woodpecker Dryocopus martius.
Posted by Domen & Sara at 15:09