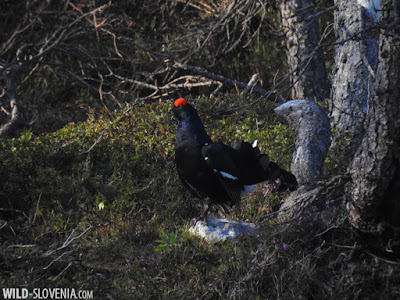 After several months spent mostly locally in the Karst, it was finally time for something more "exotic". The Alps offer an excellent array of wildlife and spring is certainly the best time to get the most of it. Later in summer, it's still good to visit the Alps, especially the highest peaks, although birds tend to be more difficult to observe, while the greatest entertainment is represented by the alpine flora and butterflies. In May and early June birds put on a great show and are somehow easier to observe. The mountains are also very quiet at this time of year, as the hiking season hasn't opened yet and most of the mountain huts are still closed. In spring we only visit the Alps sporadically, so this year we decided to go looking for some birds we don't see very often. This two-day trip represented a very welcome diversion from our usual field trips in the Karst. Our main target was to visit the courtship lek of Black Grouse Lyrurus tetrix, a relatively widespread bird in the Alps, although a seldom seen one. The easiest time to see this bird is certainly spring, when small groups of males gather at leks (courtship arenas), where they sing, display and fight over females. One of the best areas for Black Grouse are the Julian Alps within the Triglav National Park and that's exactly where we headed. As the visit to a lek is a dawn-type of thing, we needed to be up in the mountains already the evening before. Therefore we left the car in the afternoon, hiked to a mountain hut where we spent the night and then woke up well before dawn for an additional 1,30 hour hike to the Black Grouse lekking area.


Waking up at 3.30 am was well worth it! As we started our ascent from about 1400 m a.s.l., towards the lekking arena at around 1600 m, we first walked through the alpine spruce forest, where the first birds of the day began to sing. We expected to hear first a Song Thrush Turdus philomelos or a Robin Erithacus rubecula, but instead the first to open the dawn chorus were two Pygmy Owls Glaucidium passerinum (video below) and an unlikely Cuckoo Cuculus canorus. Almost at the same time we heard a distant, but characteristic "clicking" - we couldn't believe our ears: it was a singing CAPERCAILLIE Tetrao urogallus!! Although the sound was faint, apparently the bird was not very far away, as we could also hear the "hissing" in between the clicking notes. Given the early time (it was still dark) the bird must have been singing from a tree. We listened to this magical sound for a couple of minutes, before moving on.


Later on the way a third Pygmy Owl joined the chorus, while other birds like Song Thrush, Black Redstart Phoenicurus ochruros and Robin began to sing. About half an hour before sunrise addtional early birds started to sing, including a Tengmalm's Owl Aegolius funereus and Ring Ouzels Turdus torquatus, while an Alpine Chamois Rupicapra rupicapra crossed our path. As we were approaching the Black Grouse lek area, we began to hear their distinctive bubbling songs. The forest opened and we found ourselves in a beautiful stand of larches Larix decidua with heath Erica carnea in the undergrowth. And finally we arrived to the lek, on the edge of a mountain pasture. We soon located the first displaying male BLACK GROUSE Lyrurus tetrix, then the second, the third... and so on. We sat quietly, hidden behind a rock at safety distance (about 50 metres away from them) and enjoyed the spectacle for the next couple of hours. More males joined the lek later, flying in from various directions and at the end we counted 11 birds. To get the proper feeling about the experience, make sure you watch the video below! 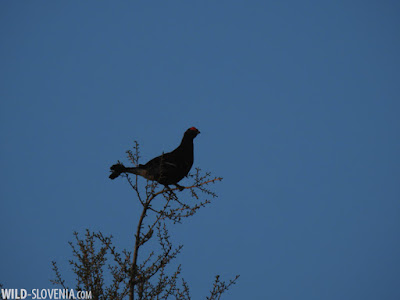 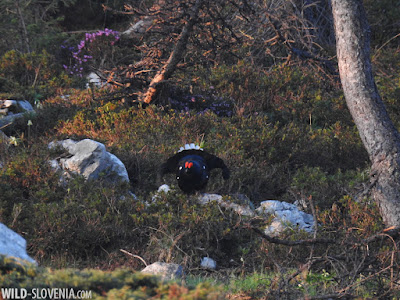 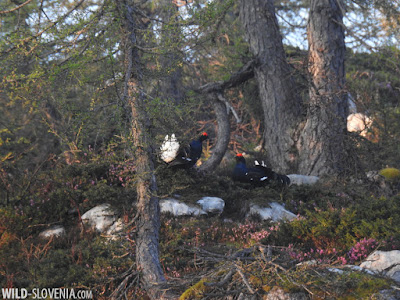 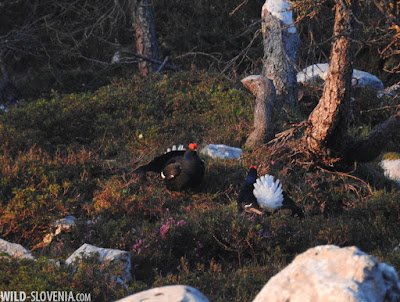 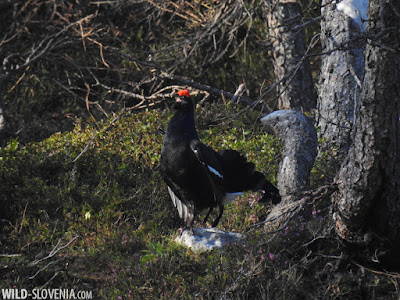 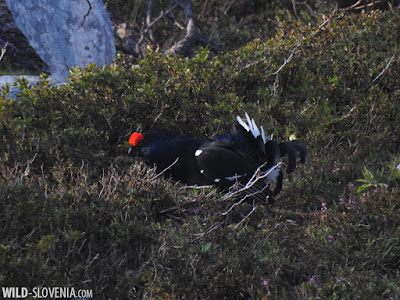 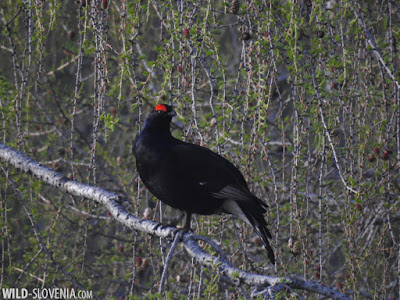 Black Grouse Lyrurus tetrix- watch the video in HD and turn on the volume!
The sound is original - produced by the displaying grouses. 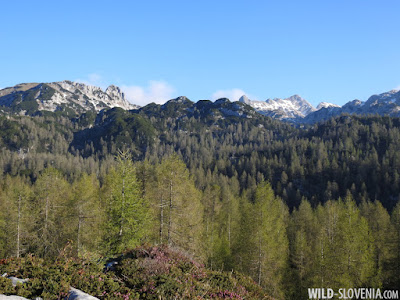 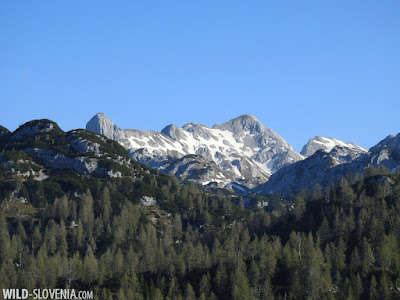 As the sun rose higher, between 7.30 and 8.00 the courtship display began to fade. The Black Grouse males lowered and folded their tails and then one by one began to abandon the lek, by flying off quite noisily. The great show was over, but for us there was plenty of other wildlife to enjoy in the alpine pasture and on the way back to our base. A quite interesting bird of the larch stands is the relatively scarce and often difficult to observe Lesser Redpoll Carduelis flammea ssp. cabaret. We were glad to find a cooperative pair that showed very well in the larches. 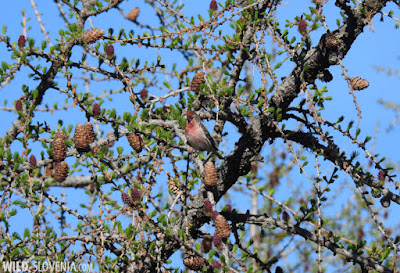 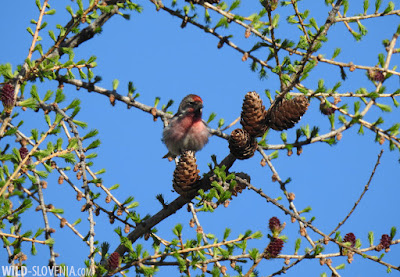 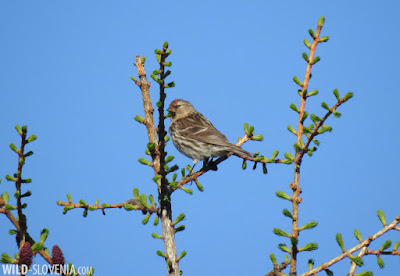 Also around were many Crossbills Loxia curvirostra and several Ring Ouzels Turdus torquatus, plus a Nutcracker Nucifraga caryocatactes as well as the usual mountain mix of common birds including Dunnock Prunella modularis, Bullfinch Pyrrhula pyrrhula, Willow Tit Poecile montanus, Lesser Whitethroat Sylvia curruca and others. A Grey-headed Woodpecker Picus canus was also heard, while later we were surprised by an immature Golden Eagle Aquila chrysaetos gliding very low above our heads, while a Marmot Marmota marmota whistled at its passage (a typical alpine scene!). The tail end of bird migration was still visible in the sky with the occasional migrating Bee-eater Merops apiaster, flying over the mountains. In the several drinking pools around the pastures we observed good numbers of Alpine Newts Ichthyosaura alpestris and even caught a nice male to take a closer look. 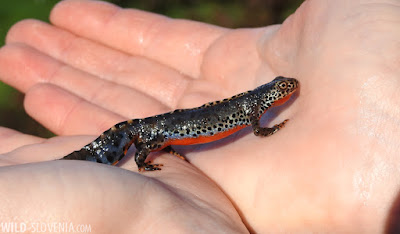 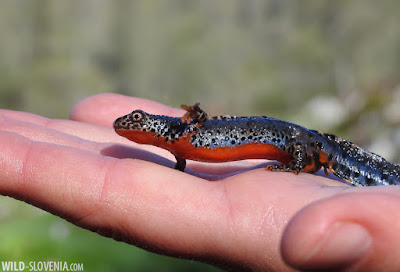 Although the best time to enjoy the alpine flora is later in the season, many of the early flowers were already in fine bloom. Spring Heath Erica carnea was awesome as were Oxlips Primula elatior, Alpine Pasqueflowers Pulsatilla alpina and Spring Gentians Gentiana verna, while the limestone rocks were dotted by Bear's Ears Primula auricula, Trumpet Gentians Gentiana clusii and small shrubs of Dwarf Alpenrose Rhodothamnus chamaecistus. Lower down in the mixed mountain forests plants like Alpine Clematis Clematis alpina and Three-leaved Anemone Anemone trifolia were also in fine bloom. All in all an excellent mixture of alpine plants to enrich this super-productive trip! 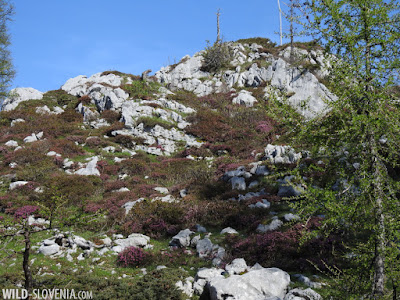 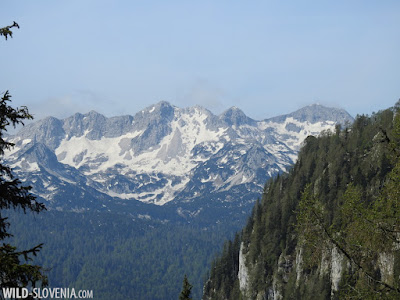