From Wallcreepers to Caspian Gulls 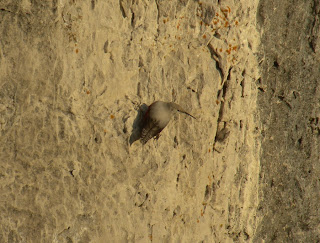 Here's a few updates from the last three days. On Friday I was doing my usual monitoring in Škocjanski zatok NR. The highlight there were at least 3 first-winter CASPIAN GULLS mixed within a flock of 170 Yellow-legged Gulls and about 800 Black-necked Gulls in the freshwater marsh. Also of note were 11 first-winter Common Gulls and a summer-plumaged Black-headed Gull (complete hood).
A ringtail Hen Harrier was quartering the grazing marsh and reedbeds, while a Peregrine was seen flying past, heading towards the port of Koper. Other birds around included 2 Greylag Geese (still present in the freshwater part), 50 Shovelers, 30 Wigeons, 250 Teals, 4 male Pochards, 2 female Tufted Ducks, 6 Pygmy Cormorants, 2 Water Rails, 15 Greenshanks, 10 Curlews, 11 Snipes (flock in flight), +20 Penduline Tits, a few Goldcrests, 6 Jackdaws, 1 Chiffchaff, Hawfinch, Reed and Cirl Buntings.
1st winter Caspian Gull 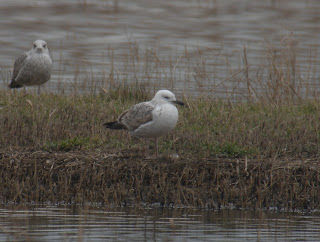 Yesterday instead I spent another lovely and warm sunny day out on the Karst (Italian side). I was leading a group of biology students on a birdwatching trip. In the beech woodland near Bazovica we had several species of woodpeckers. Earlier in the morning I had great views of a female Grey-headed Woodpecker. Later we also observed 1 Black Woodpecker (female + 1 male heard calling), 2 territorial Lesser Spotted Woodpeckers and a few Great Spotted Woodpeckers. The local Nuthatches, Short-toed Treecreepers and Marsh Tits were quite vocal and territorial too.
On the Mt. Stena (in the Glinščica valley NR) after a long wait, we were lucky enough to see both WALLCREEPER and ALPINE ACCENTOR - the two winter specialities here. The Alpine Accentor (1 or maybe 2) showed briefly on some rocks along the cliff-face and gave a few flight calls. The Wallcreeper instead was really obliging and showed superbly and close on the sunbaked rocks.
The pine woodland held the usual Coal and Crested Tits.
Wallcreeper 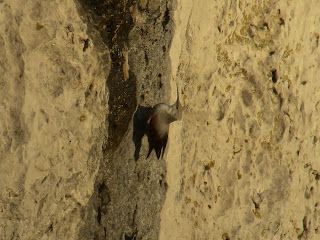 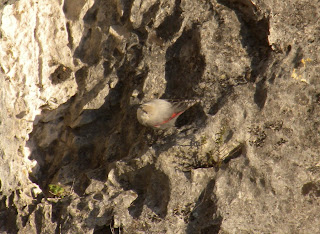 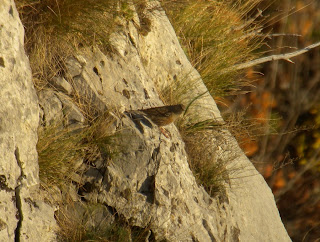 In the evening we then went to listen to the Eagle Owl, just out of the town of Trieste. When we arrived to the spot, a male Goshawk greeted us with close flight views. At dusk the male EAGLE OWL started to sing and we soon spotted it perching in full view on a rock. The best possible end to a karstic field excursion!
Posted by Domen & Sara at 03:22