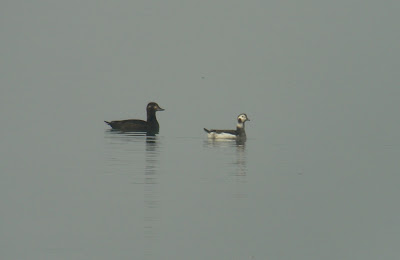 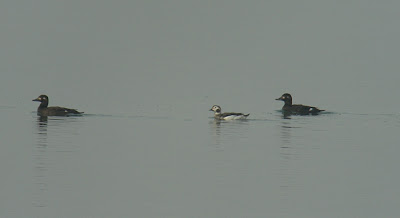 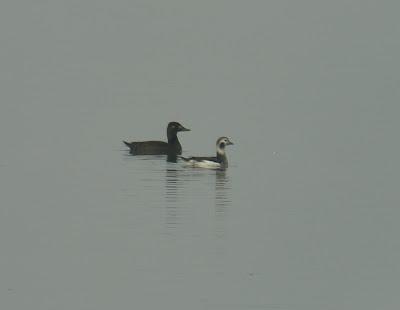 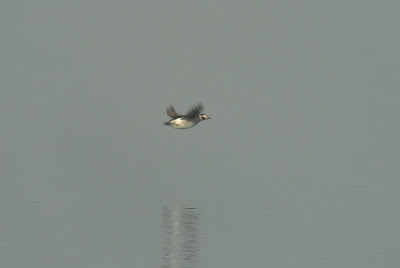 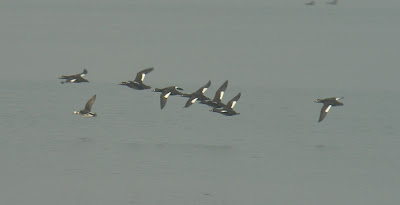 Today I spent an exciting day in the far north-east of Slovenia. I visited the lake of Ptuj (Ptuj reservoir) to see a couple of rarities reported there since last week. As I arrived to the south-eastern part of the lake, at the dam close to Markovci, literally the first bird in my scope was the LONG-TAILED DUCK. This bird, which was a female, was the main target of the trip. I was really relieved to find it so quickly. It was swimming with a group of 9 Velvet Scoters, which showed all very well (see above), quite close to the reservoir's concrete bank. After about 15 minutes I was watching it, the whole group (including the Long-tailed Duck) took off and headed to the central part of the lake (last two pics above). Later in the day I couldn't find them again.
From the dam at Markovci I then checked the rest of the wildfowl which included some very interesting birds. The first which caught my attention were 4 drake SMEWS. The commonest duck was Mallard, with probably more than a thousand birds on the lake. Both Tufted Ducks and Pochards were also abundant, along with the funny-displaying Goldeneyes, which formed good groups as well. A few Pintails, Gadwalls and some more Wigeons were also around. Other interesting sawbills included about 23 GOOSANDERS (both sexes) in a big raft in the middle of the lake. I didn't find any of the reported rarest grebes (Red-necked and Slavonian), but a Red-throated Diver was quite good as well. A few Pygmy Cormorants were also present, along with at least 20 Common Gulls and flocks of Rooks in the surrounding farmland. 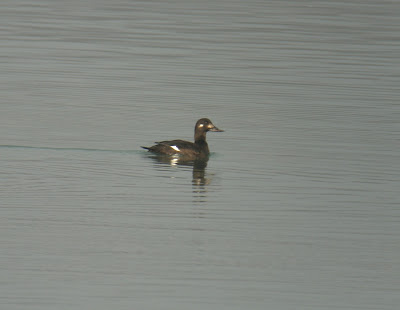 Mixed wildfowl on the lake, including a raft of Goosanders in the background 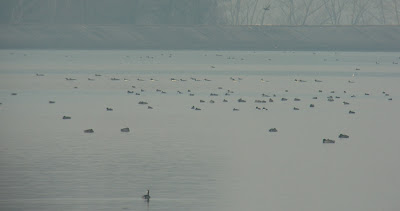 Next stop were the open fields close to the lake where I went looking for the two reported rare swan species.
Not long after I discovered a small muddy road going through the fields (sewage works area), I spotted some white dots in the distance. I approached a few hundred metres and soon I had in the scope 4 yellow-billed swans among some 15 Mute Swans.
Two were adult WHOOPER SWANS and some metres away from them were feeding also 2 BEWICK'S SWANS (adult and juvenile). Comparison here was possible due to the presence of both species; a bit like at Welney WWT in Britain! I never imagined I would see both species together in Slovenia. I know Bewick's is the second record for the country and probably there are no more than 10 records for Whooper in Slovenia, so both true rarities! 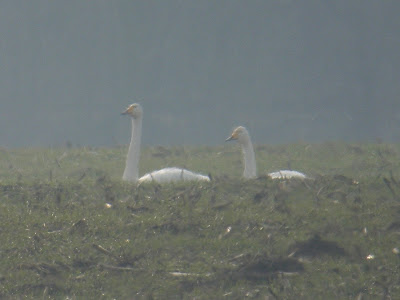 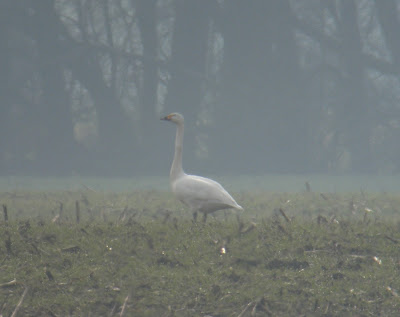 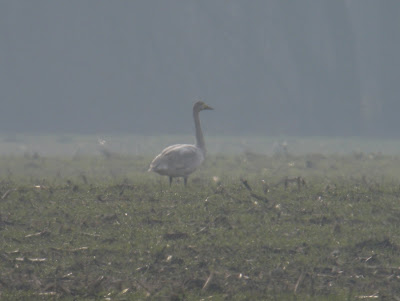 In the afternoon I went to check the Medvedce reservoir - a must-stop on the way home. Also here Mallards were the most numerous and among them I managed to pull out a 6 GOOSANDERS, some Wigeons and Teals. A Great Grey Shrike was as usual present in the surroundings and about 24 White-fronted Geese were grazing on the nearby fields. A nice ending to the day were four Hen Harriers preparing to roost (2 males and 2 females) on the central part of the reservoir.
By the way I also heard that flocks of Waxwings have been seen in Maribor and other parts in NE Slovenia, but today I didn't have time to go and look for them.
Well, I can't complain... I had an excellent day regardless!
Posted by Domen & Sara at 12:29