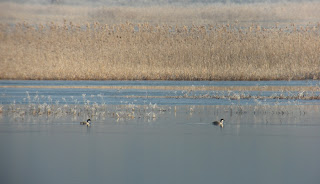 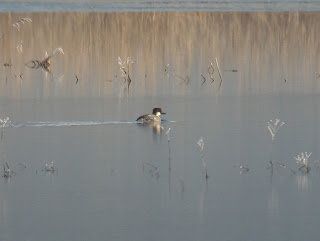 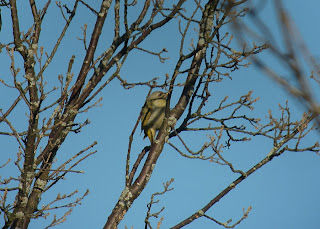 I needed to start well the new year, so yesterday I visited the Cerknica lake in Slovenia. Compared to my last visit (in December), this time the lake was almost completely ice-free and there was more wildfowl scattered around. Snow on the ground was absent, so walking around was again relatively easy!
The first birds noticed were +20 Goldeneyes, along with a few grebes and more interestingly 2 redhead SMEWS (first 2 pics above). The usual wintering flock of at least 1000 Mallards was present, but unfortunately it didn't contain many other species. Some Wigeons were heard, along with a single male Pintail swimming around and 4 Tufted Ducks. Four Shelducks were also of interest.
In the nearby fields at least 3 Great Grey Shrikes were seen and it was quite interesting to see 3 Grey-headed Woodpeckers in different woodland habitats (a male above). On the fields around Martinjak 4 Hen Harriers were hunting (all females except one). Other birds around the lake included the usual forest mix of Crested, Marsh and Coal Tit, Siskin, Mistle Thrush, Hawfinch and so on.
Later in the day, other parts of the Notranjska region were visited, from Postojna to Pivka and Ilirska Bistrica, back to the Karst. Birds seen in the rest of the day included 4 other Great Grey Shrikes, a couple of Ravens, 1 Peregrine (perching on the cliffs at Podstenje) and lots of Common Buzzards - accurately checked in the search of a Rough-legged.
Oh, and I must mention my first bird of the year - a Blackbird in the garden (07.30 am).
Posted by Domen & Sara at 09:56