IWC on the Slovene coast 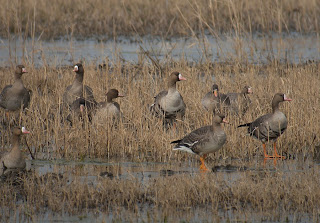 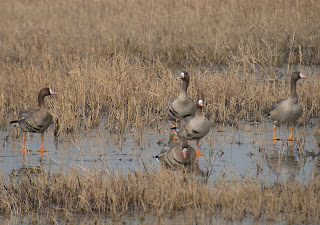 Had a busy day on the Slovene coast, counting for the IWC (International Waterbirds Census). I had a couple of coastal transects between the towns of Koper and Izola. The top highlight appeared right at the beginning when I spotted 6 female VELVET SCOTERS in the bay of Koper. They gave good flight views before landing distantly on the sea. Other birds seen during the census included: 3 Red-breasted Mergansers, 2 Great Egrets (over the sea), 4 Black-necked Grebes, 27 Great Crested Grebes, 21 Cormorants, 3 Common Gulls, 2 Shags, 1 Med Gull and 1 first winter Caspian Gulls (Izola harbour).
Later in the day I checked Škocjanski zatok NR, which held some newly arrived northern guests: 19 White-fronted Geese (arrived overnight). The flock was quite flighty and wary and always on the move between the grazing marsh and some other fields in the Srmin area, out of the reserve.
Otherwise pretty much the same in the wetland, with the usual numbers of wildfowl, but an astonishing number of gulls. A flock of about 800 Black-headed Gulls and 500 Yellow-legged Gulls held also at least 3 first winter Caspian Gulls and 48 Common Gulls.
Caspo 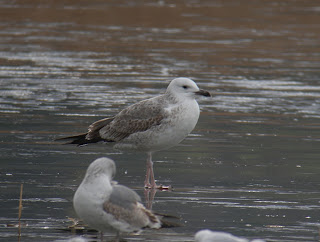 In the Srmin area (near Ankaran) I also checked a newly built "sewage farm" or some kind of strange reservoir, which held twice the number of gulls. Among the three commonest species I also found at least 6 additional Caspian Gulls, this time also two nice adults and some sub-adults.
Two adult Caspian Gulls 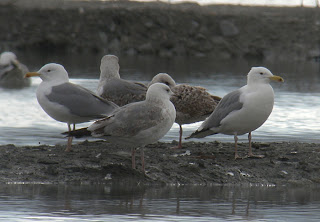 A Fieldfare was in the nearby fields, along with Meadow Pipits and about 40 Jackdaws.
My final stop was in the evening in the bay of Lazaret - Debeli Rtič (near Ankaran) where I had to count the Shags at the roost. There was a miserable total of 29 Shags and 122 Cormorants. The sea here held additional common grebes and Red-breasted Mergansers and most surprisingly, a lone White-fronted Goose (it didn't seem too handsome). The final highlight came at the end when I spotted an adult LESSER BLACK-BACKED GULL on one of the buoys.
A quite gull-y day I must say (I probably broke my record for Caspian Gulls in a day!)
Posted by Domen & Sara at 13:12