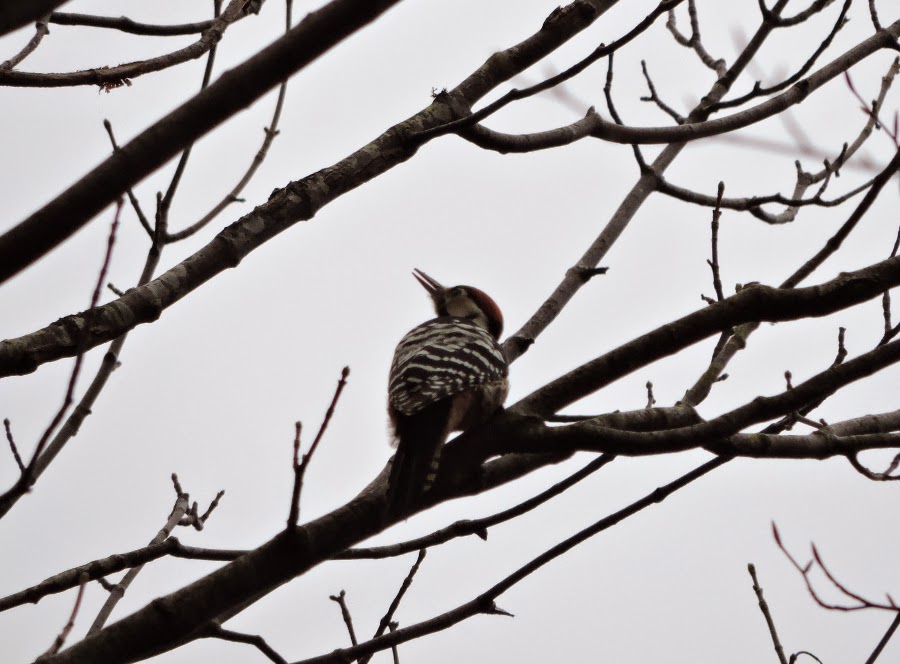 The highlight of the past week was the census of WHITE-BACKED WOODPECKER Dendrocopos leucotos in the Kočevje forests in southern Slovenia. I only had one individual of my target species but the day proved very exciting because of some other encounters. While driving on a forest road I saw a WILDCAT Felis silvestris running away from the road in the middle of the day. I stopped the car and ran out to have a look around, but despite the forest being really open and without much undergrowth, the cat was simply vanished in a few seconds. This was my second ever wildcat and the first in its main stronghold - the Dinaric forests. Below a picture of my previous encounter in 2013.

As I was getting back to the car, I noticed a "woodpecker movement" in the canopies, looked up and saw a Middle Spotted Woodpecker Dendrocopus medius. It was actually the third Middle Spot of the day. I didn't expected they were so common and easy to get in the Kočevje forests.

During my census I also had other species of woodpeckers, including Great Spotted D. major, Lesser Spotted D. minor, Grey-headed Picus canus, Black Dryocopus martius and Green Picus viridis. March is a great time of year for woodpeckers because they are very vocal and territorial and easily observed through the canopies (the trees are still leave-less).
The same day I also had close daytime encounters with about 10 Red Deers Cervus elaphus (including 2 males) and a Red Fox Vulpes vulpes. Of the other birds the most interesting was the presence of both Short-toed Certhia brachydactyla and Eurasian Treecreeper C. familiaris and a good movement of Woodpigeons Columba palumbus in various flocks.

As usual in this time of year, every new flower that sprouts is a little joy. In the photos you can see the newly emerged flowers of a typical Slovenian spring taken on different locations.