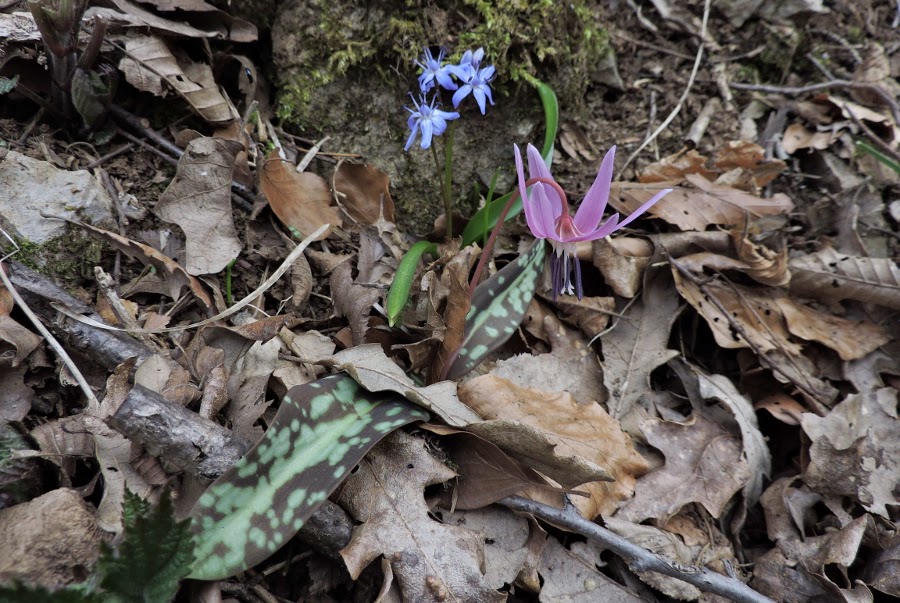 The last week or so has been quite good weather and wildlife-wise. I'll go through it describing the different locations I've been to. First of all, let's start with the highlights!
Today I returned to the location of the MIDDLE SPOTTED WOODPECKERS Dendrocopos medius, where both birds were present (pair), but most importantly, I saw copulation taking place. An undeniable sign of breeding!
Needless to say, the area was as usual full of woodpeckers in breeding activity, song, drumming ect. Also two Tawny Owls Strix aluco were heard - a male in the afternoon and a female in the evening.
The woodland floor is getting really colorful and today the botany highlight was Erythronium dens-canis - a common, but very nice-looking flower with up-twisted pinkish petals and green patchy leaves. 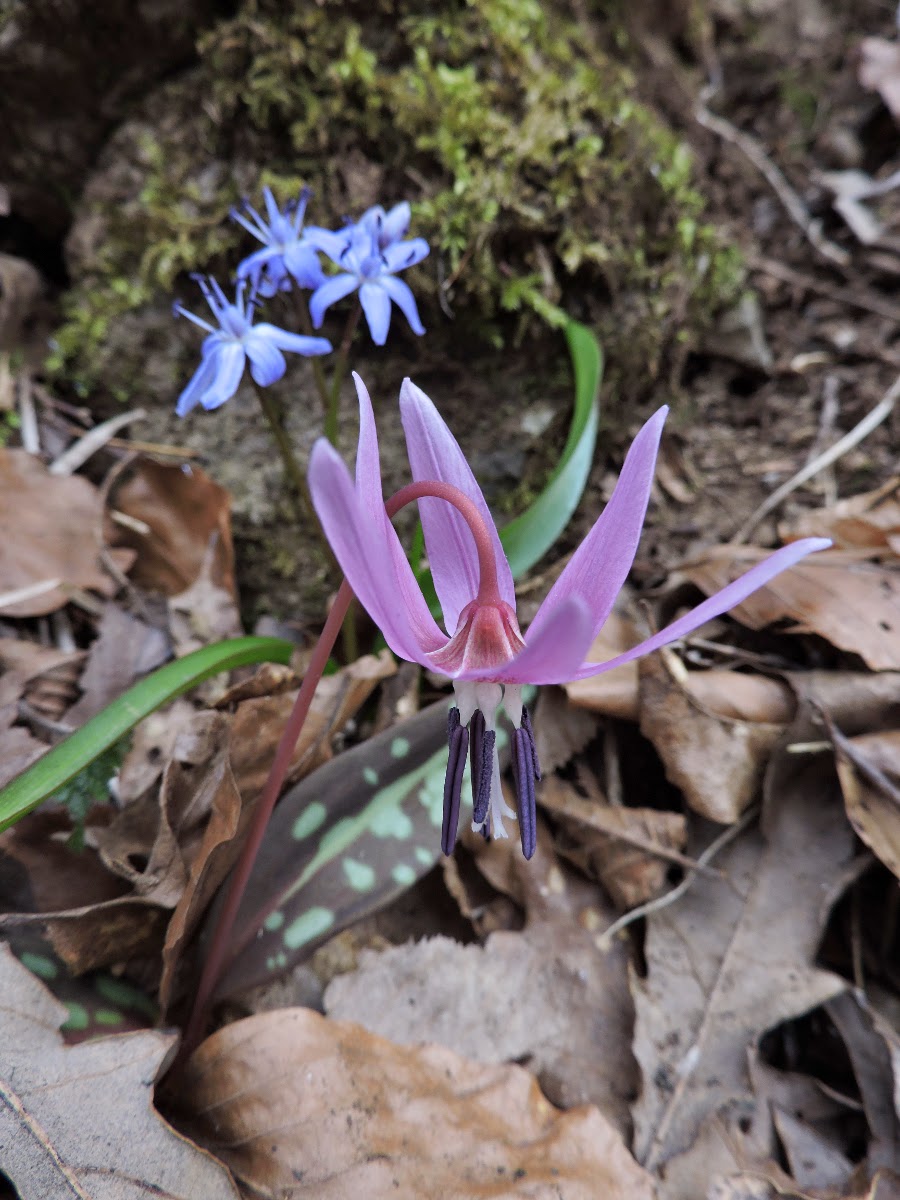 Still more interesting, was the fact that in the evening I heard a female URAL OWL Strix uralensis calling in the forest where I had two in October 2014. Since then I returned to the place several times, but failed to contact the birds. Today after I "sang" a male Ural Owl (an ability I'm quite proud of), the female answered nearby, calling back at me for some minutes. It was of course a very welcome answer as this means the Ural Owl is resident in the area. And this is probably the only known pair on the Karst.

Yesterday I took part in the yearly Eagle Owl census organised by DOPPS on the Karst in Slovenia. The beginning of March is the best time of the year to track down the territories of these birds, because the males are most vocal and pairs are in the process of formation. The species has something like +100 pairs in Slovenia and is considered a rare and potentially threatened bird. It is mostly confined to large cliff areas or rocky slopes and it also found in some active and abandoned quarries. The population's stronghold is on the Karst.
Me and my group were lucky enough as a singing male EAGLE OWL Bubo bubo flew a few metres above our heads and perched on the top of a pine tree, some 10 metres away from us. The overall scene looked a bit like the photo below (taken some years ago). The spectacle lasted for a few seconds only, before the bird flew away.

Yesterday before the census I also checked the river Reka, near Škocjanske jame where a Dipper Cinclus cinclus and Grey Wagtails Motacilla cinerea were of note. The former is apparently nesting somewhere in the canyon. The riverbanks were full of colorful wildflowers.

During last week I also checked with some friends a location for Eagle Owl near Trieste. On one occasion we saw both birds sitting together: one on a rock, the other on a pine, thus suggesting the pair is still there and probably doing well.
Another happy news of breeding comes from the Glinščica/Val Rosandra valley, on the outskirts of Trieste, where a pair of Peregrines Falco peregrinus has decided to nest in a limestone cliff. The first breeding for the area in recent times was in 2008 and since then, the pair has bred irregularly. Luckily the cliff where the nest is located is now closed to rock-climbers and general public, until the end of June.

A cliff in the Peregrine's neighbourhood is also hosting a nest of Ravens Corvus corax. Two Crag Martins Ptyonoprogne rupestris were also present nearby where I was there. Two individuals of the latter were also seen around the cliffs of Monte Grisa, close to my home, where the air is now filled with the smell of Euphorbia wulfenii - a plant with a Balkanic distribution, found along the coastal cliffs around Trieste. To add a bit of Mediterranean touch to the area, a female Sardinian Warbler Sylvia melanocephala was also present the other day. 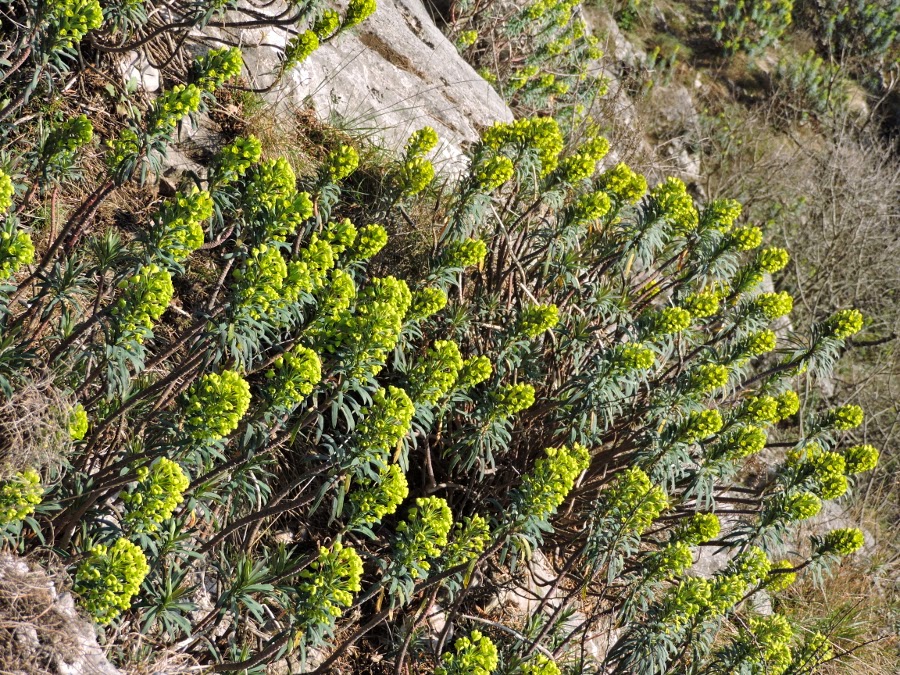